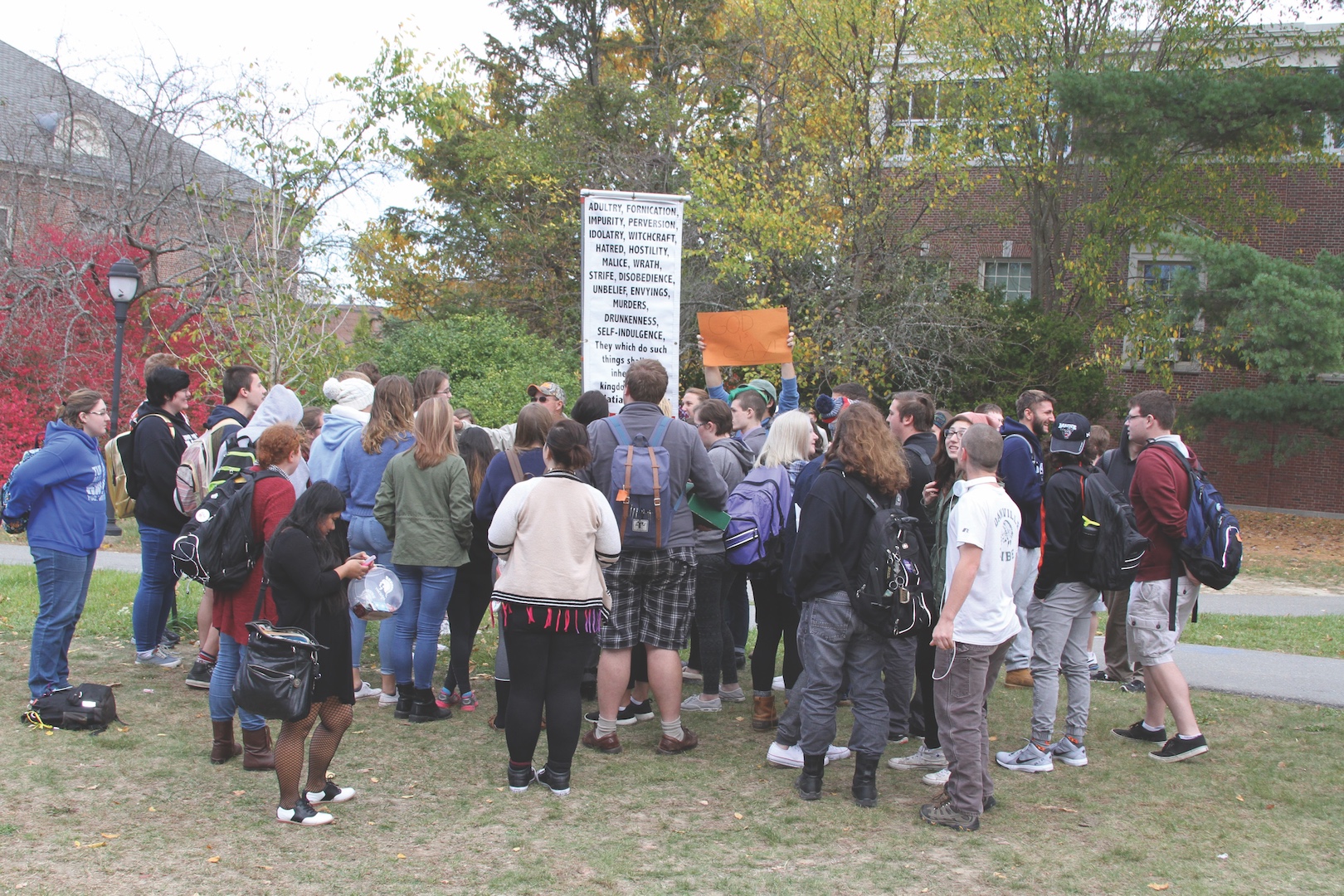 The protest following the flag raising offered a safe space to discuss difference of opinions. Photo by Jordan Houdeshell

On Oct. 16, the University of Maine raised the LGBTQ pride flag — one of many LGBTQ awareness and pride events that would take place in and around the community in honor of Coming Out Week. The flag-raising did not come without opposition. The same day as the ceremony, an unidentified man arrived on campus to protest. He held a sign quoting Biblical passages. This was not an isolated incident, as the flag-raising has been protested in previous years as well.

UMaine students responded with a counter-protest against the man’s messages. Several made impromptu signs, came with rainbow flags of their own and chanted in opposition. As the Bangor Daily News reported, counter-protesters sang acappella to the man at one point. Some students opened dialogue with the man. The conversations heavily centered on Christianity and interpretations of the Bible, in regards to homosexuality.

Overall, the atmosphere was charged at times, but calm. The protest was spread over several hours in the afternoon. At times, the scene was quiet. Other times, students in Fogler Library nearby could hear shouting.

The UMaine campus is much more tolerant of protestors than some. Many private universities don’t allow non-student or faculty people onto their campuses, which disallows some from reaching an audience. In public places, free speech zones may be designated for the purpose of allowing the community to come and make political demonstrations. Many universities have free speech zones and require only advance notice and adherence to locations where students won’t be disrupted in class. These zones don’t apply to private universities.

Whether or not the university agrees with the content being discussed in these small-scale protests, people are generally welcomed onto our campus to speak and rally around their truths. As long as no outright violence occurs, UMaine allows demonstrations. The University of Maine Police Department will make occasional appearances to make sure that the situation isn’t getting out of hand.

In recent years, the closing of free speech zones and the rise of safe spaces has caused tension. Some argue that, without the right to gather and protest in spaces like university campuses, dialogue is not happening between opposing parties. This can happen with any issue, though especially for political and social movements.

It should be made clear that safe spaces are not where political protests should be happening. Safe spaces are made for marginalized people with the aim of providing resources. These spaces may provide services on site or point people toward professionals who can help. They may exist as a decompression space. Though safe spaces are often created for LGBTQ individuals, they are also made for people of color and veterans.

UMaine hosts several safe spaces around campus, while also serving as open forum for conflicting views during protests and other gatherings. Free speech and safe spaces don’t have to be at odds with one another, as long as we allow them equal space.

Recently, America has been national witness to a plethora of protests covering many different movements. It seems that every day has a new protest in another city. Here in our corner of the country, UMaine is modeling a productive dialogue that allows each side to say their piece, and have a chance to talk face to face. Having the chance to debate and demonstrate resistance is one important, sometimes forgotten, step toward making progress on an issue.

milk and honey review
‘Me Gran Bags Quicker Than That’