Farmers’ Market a spot for students to de-stress 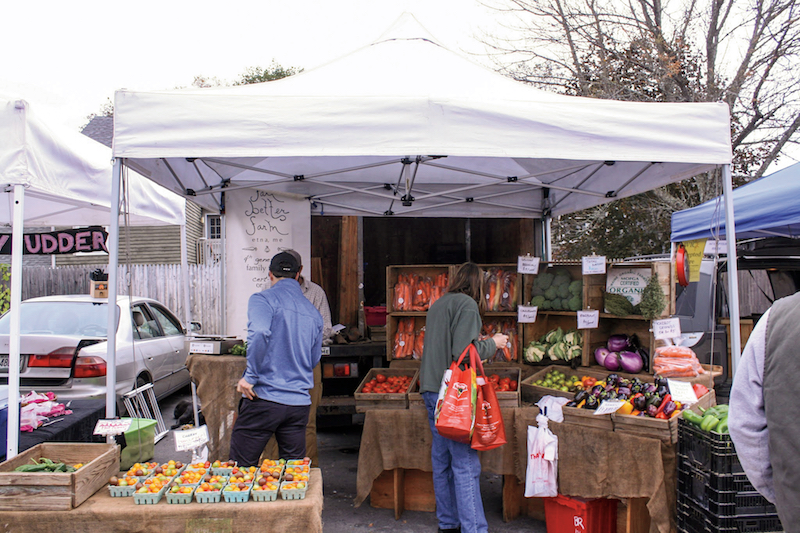 The Orono farmers market has been serving Orono for almost 25 years. Photo by Jack Barber, contributor

After a long week of work and school, Saturday mornings are times for rest and recuperation, as well as preparation for the upcoming week. For many residents of the greater Orono area, the Orono Farmers’ Market provides just that.

The market has been a staple of the town’s culture since 1994, when the inaugural market was held in the Steam Plant parking lot with 20 vendors. Two and a half decades later, the tradition continues almost unchanged. Although 33 farms are currently members, students and community members can find around 20 stands set up at the Steam Plant every Saturday morning, where small vegetable and plant farms from all across Maine sell their goods.

This week’s market was moved temporarily to its winter location at the Pine Street parking lot due to Homecoming weekend. After Thanksgiving, the market will move there until commencement in May, when it returns to its summer location at the Steam Plant.

While the lineup has changed over the years, some farms have been participating in the Orono Farmers’ Market for much of its existence. Grassland Organic Farm has been a part of the Orono Farmers’ Market for the last 10 years. For them, the market serves as the business side of their farm, which is primarily a dairy farm and is located an hour away in Skowhegan. The farm itself is for production, and is typically closed to the general public, so the market is their chance to interact with their customers.

Other members are much newer, though; Ironwood Farm in Albion was voted in as a new member just this year.

“We’ve had a lovely experience in Orono,” Nell Finnigan, the farm’s owner, said. She had been selling at farmers’ markets just north of Boston before moving back to Maine and purchasing Ironwood. “It’s a really nice community of people.”

“It’s a great market,” Courtney Williams said citing the loyal regular customers as a reason for the market’s success. Marr Pond Farm is a Community Supported Agriculture farm, which means customers purchase “shares” and receive a box of products, typically vegetables, each week of the farming season. This helps farmers make more money and gives customers fresh food and increased awareness of how food is grown.

Some farms sell exclusively at markets, but others, like Marr Pond, sell wholesale — they send larger quantities of food to various local stores and make sales through them. Marr Pond’s products can be found at the Natural Living Center in Bangor, Axis Natural Foods in Auburn and food co-ops in Belfast, Blue Hill and Portland.

The Orono Farmers’ Market has drawn members for nearly 25 years, providing a sense of community as well as a more intimate knowledge of where food comes from, and will likely remain an integral part of life in Orono for many years to come.