Flag is raised in honor of Coming Out Week 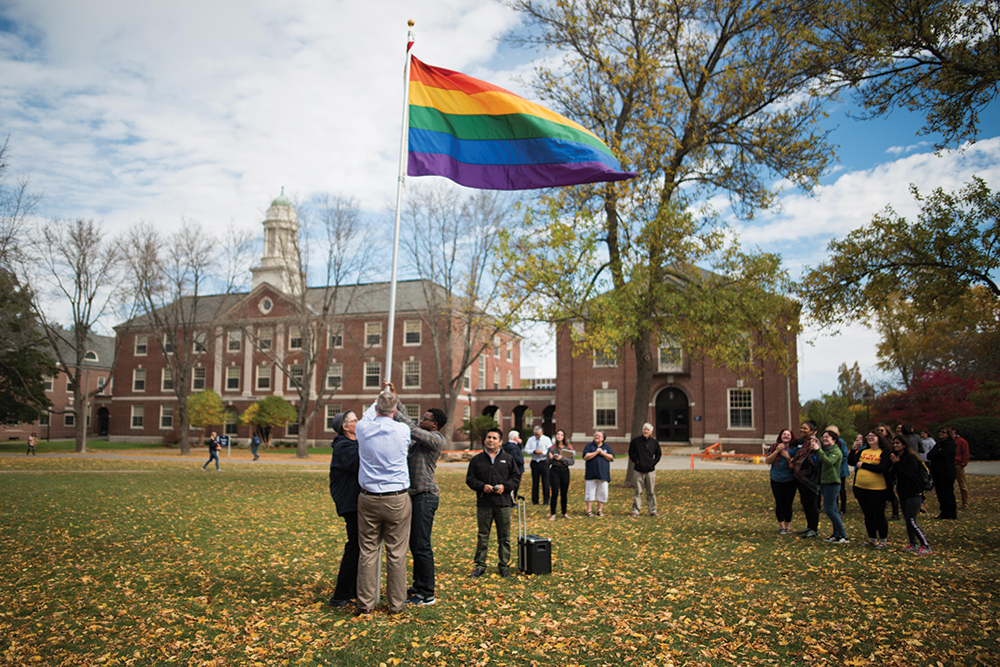 The University Of Maine kicks off Pride week with the raising of the Pride flag, Monday. Photo by Maggie Gautrau, Photo Editor

This Monday, Oct. 16  marked the start of the University of Maine’s 33rd Coming Out Week, a collaboration between UMaine’s LGBTQ Services, the Rainbow Resource Center and Wilde Stein. Coming Out Week celebrates members of the LGBTQ community on campus as well as their allies.

The week kicked off with the raising of the rainbow flag in front of Fogler Library at noon on Monday. Silvestre Guzman, director of the Office of Multicultural Student Life and the Rainbow Resource Center, was the first to address the nearly 50 students and staff gathered on the mall, thanking everyone for supporting the event. Guzman also announced that the week would culminate in a two-day conference, in collaboration with Equality Maine.

Jennifer Iwerks, the Staff Associate for Diversity and Inclusion spoke on behalf of Wilde Stein, the queer-straight alliance on campus.

“I’m so happy that the people who identify with this flag are here,” Iwerks said.

She also acknowledged the allies present, but emphasized that simply showing up is the beginning of allyship, not the end.

Coming Out Week was created to celebrate UMaine’s diverse student population, as well as honor the strength it takes to come out.

“Coming out can be a difficult time, and we want to offer support,” Mark Dube, the graduate assistant in the Rainbow Resource Center, said. “It takes a lot of courage to admit that you’re different. We publicize so we can bring people together.”

The week also showcases collaboration between groups on campus. Dean of Students Robert Dana thanked the Feminist Collective, known until its recent name change as the Student Women’s Association, for working with Wilde Stein.

“Things have changed here in Maine. It’s a society that celebrates people,” Dana said, noting the university’s long-standing tradition of holding Coming Out Week. “Diversity makes UMaine stronger, and we are so very thankful for every member of this community.”

As the ceremony was winding down, a protest surrounding a religious extremist outside the Memorial Union was beginning. He carried a large sign with slogans including “God is angry with the wicked every day” and “Repent or Perish”, as well as a lengthy list of sins. Students gathered around him armed with glitter, rainbow flags and signs hastily scribbled on notebook paper, chanting “Love Trumps Hate” and “God is gay, so are we.” 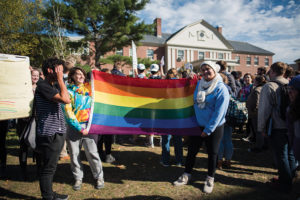 “It’s really unproductive to follow hate with hate,” Michaud said, who came out as transgender when she arrived at the university in August. “UMaine is a place where I feel safe. I don’t want other trans people to feel like they can’t be themselves.”

Michaud spent four or five hours protesting and wished others would do the same. “You gotta stay, you gotta fight, you can’t back down.”

The mission behind Coming Out Week is to promote acceptance in the UMaine community, and the ceremony as well as the protest demonstrated the spirit that LGBTQ students and allies hoped the week would have.