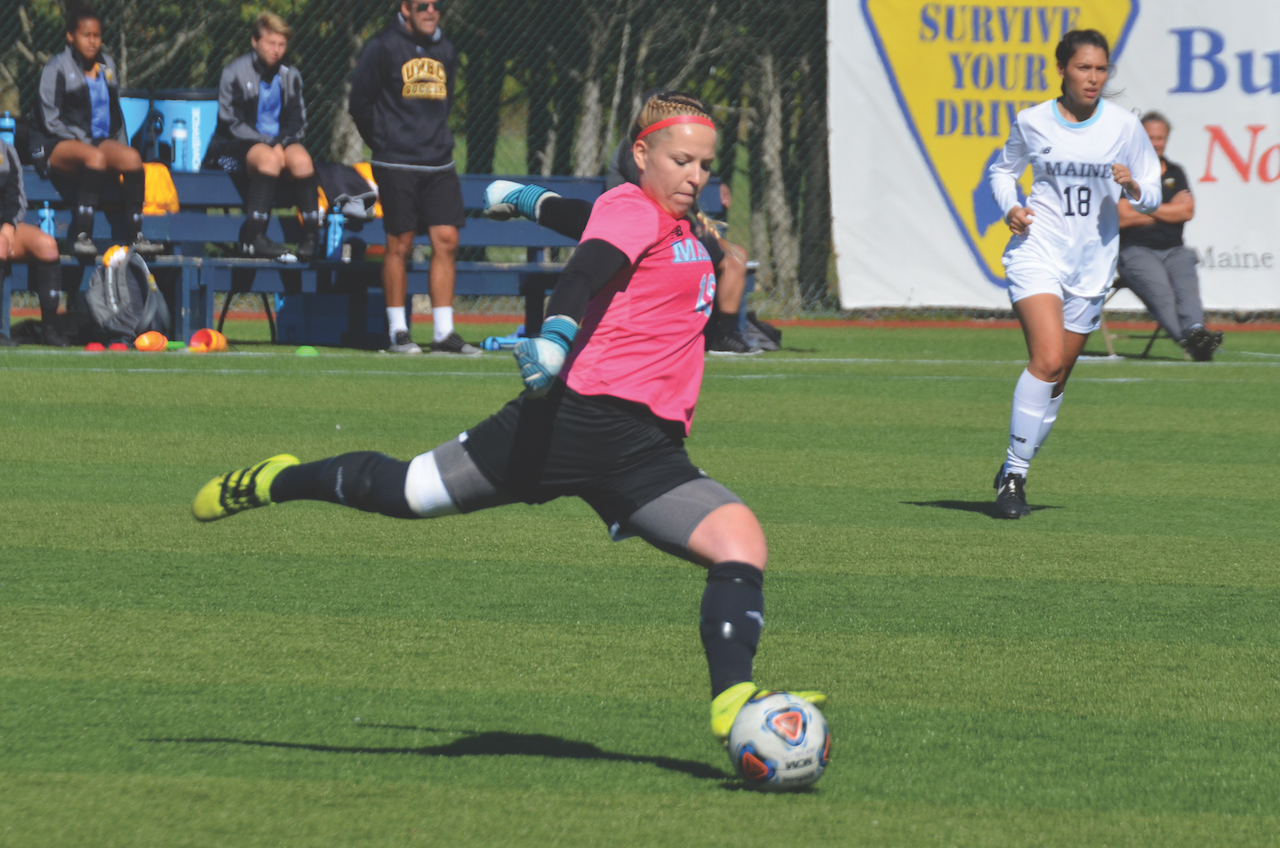 A minute into the first 10-minute overtime period, first-year Gabriela Gamory wove her way through traffic and netted the game-winner for the Hawks, quashing any hopes of a Maine comeback. The goal was the first of Gamory’s young career, and it propelled the team to their fourth straight win. The streak is the longest since the squad won four straight this same time a year ago.

Hartford, who entered the season as favorite to win the America East, played like it in the early going. Less than five minutes in, second-year forward Kaila Lozada scored off a ricochet shot. The goal gave Lozada five on the year, which tied her for the team lead. The second-year has been heating up as of late, now having scored in three of her past four games.

Despite the early deficit and Hartford’s strong suffocating defense, Maine played unphased and countered the aggressive play with some of their own. Second-year midfielder Nicole Bailey displayed excellent hustle while tracking down a pass from fellow second-year midfielder Emilie Andersen. Despite the pass going beyond Bailey’s reach, her quickness allowed her to sprint through the Hawks’ defense and drive home the game-tying goal. The goal was her second of the year, and it gave her a team a high of six points on the season. The assist gave Andersen her second point of the season and she has now had one in two consecutive games.

From there, the game would remain scoreless throughout regulation thanks to strong play from both teams’ defenses and goalies. Second-year goalie Annalena Kriebisch made four saves on the night, including a difficult one before the end of the first half, which preserved the tie.

First-year goalie Maia Perez matched Kriebisch’s effort, tallying four saves of her own. With only one goal allowed, the game marked ninth in which Perez has allowed one goal or less.

Overall the Hawks led in the major offensive categories. They outshot UMaine 18 to six overall and six to five on shots on goal. The Hawks also led in corners three to one.

Maine had seven players play the full 90 minutes of the game, including fourth-year defender Amy Falkin, who has done so in every game this year.

The overtime game marked the fourth one of the year for the Black Bears.

Maine returns home for a noon matchup against University of Maryland Baltimore County (UMBC). Afterward, they will hit the road for a trip which includes games against New Hampshire, Vermont and Albany in the span of 10 days.

The UMaine Women’s soccer fought off aggressive play from the University of Baltimore Maryland County (UMBC) (2-6-3) Sunday afternoon, to preserve the shutout. The team improved to 2-1 in America East play, while the Retrievers dropped to 0-2.

“Full credit for bending and not breaking,” head coach Scott Atherley said of his defense’s performance. Although not allowing a goal, the team faced a lot of pressure in the second half, including four consecutive corner kicks from UMBC. UMBC held the total edge in corners 12 to six.

Despite all the opportunities for the Retrievers, UMaine managed to deny them any decent shots toward the net, truly exemplifying the idea of the bend, but don’t break defense.

The best chance for UMBC came in the 83rd minute, when second-year Nikki Saad hit the post on a shot to the left corner. Saad was looking to score her first of the season.

The Black Bears played strong in the early going, forcing UMBC to stay in their end for much of the first 20 minutes. The team had a number of excellent set ups in the time frame and eventually converted on a corner. The goal happened when fourth-year Kendra Ridley headed in a pass from second-year Emilie Andersen off a corner kick in the 15th minute.

“They decided to zone the box, they played six zonal players, and weren’t marking me, or anyone else, which was nice because it gave us more room. Then Emilie put in a beautiful ball and I just happened to get it in the back of the net,” Ridley said of the situation.

The goal was Ridley’s second of the season, but the Ontario native has proved to be a force for the Black Bears in every game so far. She again played the full 90 minutes and was involved in several defensive stops, along with many great passes on the offensive side. Despite the goal being just the third of her career, all of them have proved to be game winners against America East opponents.

The Black Bears held the edge 13-12 in total shots as well as 5-4 on shots on goal. The opportunities were there throughout the afternoon, but the team could never quite finish their well-executed set ups.

“We definitely had a lot of chances, especially in the first half of this game,” Ridley said.

Much of the first-half chances were given to the Black Bears by undisciplined play on the Retrievers side, and moving forward, Ridley realizes that the team will need to do a better job finishing.

“We got to focus on getting the ball into the back of the net and following our runs in and tracking them,” she emphasized.

The Black Bears had a chance to go up 2-0 minutes before the half when first-year defender Olivia Bamford drove a shot in from nearly over 20 yards out. A leaping save off the fingertips of first-year goalie Jade Wilkins denied Bamford her second goal of the season.

Both goalies played exceptionally well. Wilkins finished with four saves on the afternoon, in what was her first start of her college career.

Second-year goalie Annalena Kriebisch had five of her own. The shutout was the German native’s seventh of her career, and her fourth of the season. Kriebisch played on her toes for much of the second half, staying alert and trying to fend off the barrage of corner kicks from UMBC.

The Retrievers were unable to take advantage of their aggressive offensive play though; the team consistently held onto the ball too long, often resulting in turnovers.

Second-year midfielder Jessica Hopkins had the best looks for UMBC, finishing with three shots total, with two being on goal.

Third-year Jenna Denis also generated multiple shots for the Retrievers, with her best attempt sailing over the post in the 62nd minute. The shot would be one of the last chances UMBC had to tie the game on the afternoon.

The win was Atherley’s 147th of his UMaine tenure, and overall the team now leads the series 12-3-1 against UMBC.

The Black Bears won’t return home until Oct. 19, when they take on Binghamton. Their next three games will feature America East opponents in University of New Hampshire on Oct. 5, Vermont on Oct. 8 and Albany on Oct. 15.