Honors graduate Sara Morris speaks of her journey after UMaine 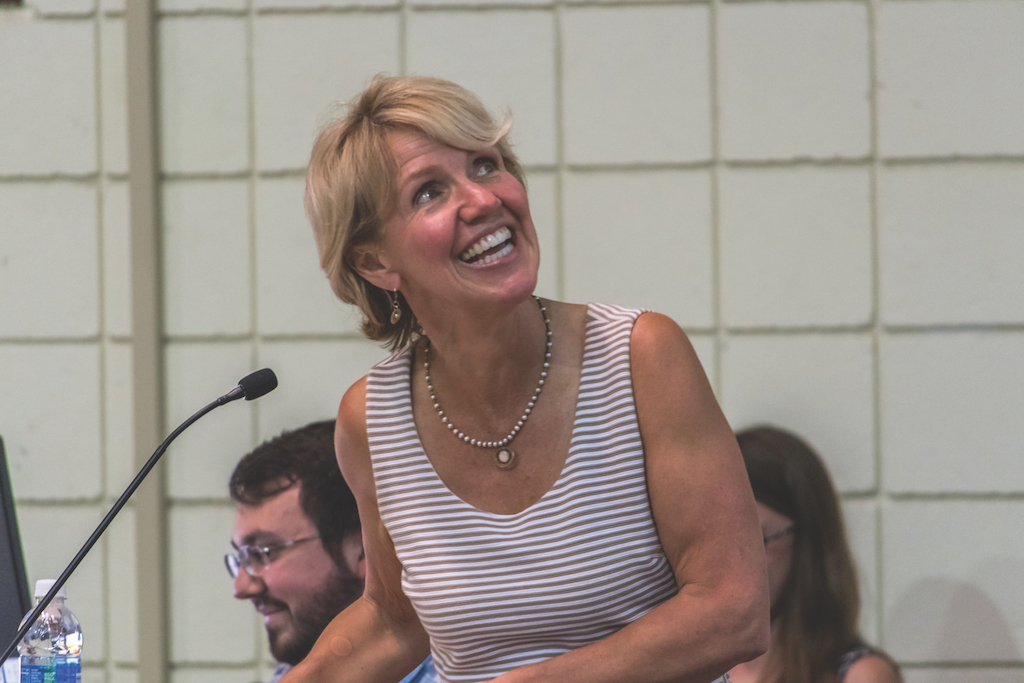 Born in England, Morris moved to Maine when she was 13. Her father, a marine biologist, was one of the founders of Bigelow Laboratory for Ocean Sciences in East Boothbay, Maine. In 1986, Morris earned her bachelor’s degree in accounting from the University of Maine.

“It was a good school then, and it’s a an outstanding school now,” Morris said.

Morris held several jobs to put herself through school, one of them being a typist for the Maine Campus newspaper. Upon graduating with highest honors and distinctions, Morris began her career as a Certified Public Accountant (CPA) in Boston with Deloitte & Touche. She has held senior leadership positions with high-growth financial services companies ever since.

Provost Jeffrey Hecker and Dean of the Honors College Francois Amar introduced the speaker to an audience of nearly 150 people.

“One of the really great things about my job is meeting people who graduated from UMaine,” Provost Hecker, also a UMaine alum, said. Past speakers include Pulitzer Prize-winning Los Angeles Times reporter Bettina Boxall ‘77, and Nobel Peace Prize recipient Dr. Bernard Lown ‘42.
“I love to ask them about their journeys, where they are, and how UMaine played into that. These journeys are interesting, you meet different people and you find something in common with them,” Hecker said.

Morris is a managing director of Portland-based Stone Coast Fund Services. Stone Coast is an award-winning hedge fund administration company servicing more than $53 billion in assets and 80 hedge fund managers across the country as well as investors around the world.

“That song is necessary for all kinds of reasons, because you are here on probably one of the hottest days of the year,” Morris addressed the audience. “Being a speaker today is an honor that I don’t even think I have the words for. When I walked around the campus at night, I still couldn’t believe that 31 years have passed, but perhaps it’s a reminder of how quickly time goes by.”

Morris remained cheerful, humorous and confident as she gave the overview of the industry which she worked in for over 23 years.
“Here I am, fervently hoping to empower something, anything of value, and I figured it’s best to talk about areas I have expertise in. There are two things where people have good area of expertise in, that is talking about themselves and talking about their work.”

After graduating from high school, Morris worked at Cole Haan. She started in processing, after a while she moved on to customer service, then she volunteered to cover for someone at the reception desk, and after a few months, Morris built up the courage to ask the chief financial manager, her boss’s boss, to meet with her. Morris was in the midst of deciding her career path, contemplating being a doctor or an actress.

“He recommended accounting as a major,” Morris said. “I didn’t have the money to be a doctor, nor the talent to be an actress. The world has a way to tell what you want, but only you can determine who you are, so I made the practical choice of being an accountant because I needed to pay the bills.”

Her freshman year, Morris found the Honors building while walking around campus. When she entered the building, it felt like a sanctuary for her.

Small classrooms, cozy chairs, the classes, books and other students gave me the outlet on the world around me,” Morris said. “Do not underestimate the importance of power of being able to read, speak and write about a subject that’s new to you. Thirty-one years into my career, I use that skill every single week.”

Prior to giving her talk, Morris sat in on the Honors class that was discussing the importance of science, philosophy and technology.

“I was humbled by the intellectual curiosity of this room,” Morris said. “You are the books you read, the films you watch, the music you listen, the people you surround yourself with.”

Throughout her talk that was accompanied by musical pauses, Morris emphasized the value of kindness, and the importance of working with and for kind people.

“They will always try to do the right thing for the people who work there,” Morris said. “Because kind people will not tolerate unkind people. Being a kind person, is the cost of entry at my firm.”

Morris believes that success in her field of work can be attained by lack of politics, by integrity and ultimately, by joy.

“It is possible, indeed probable, to find happiness, no matter the job. Because the choices you make will influence the satisfaction. You certainly choose your work ethic, your attitude, you choose to be curious or not.”

The day following the lecture, the Honors College hosted a breakfast with Sara Morris on the fourth floor of Colvin Hall. The breakfast was well attended, with 15 people around the table, eager to get straight into questions. The topics that came up from the engaged discussion were the state of the current politics, feminism and gender roles in her field of work.

“When women get in the positions of power, they usually get put there, they have to be put there by men,” Morris said, as she gave an example taken from her life. “I’ve been advanced by the men I’ve worked for. The vast majority of people I meet are men. Maybe that’s because women are not drawn to that, or maybe it’s not just that.”

Morris also asked the students questions she was curious about. She shared her hesitations toward having required college classes on microaggressions, which one of the students suggested as a means to challenge the the casual degradation of minorities.

“Permitting it to be said, and having a dialogue about it, first of all, is a lot more of a real world,” Morris said. “Choosing to confront it, is about picking your battles.”

The Distinguished Honors Graduate Lecture series is a collaboration between Teachers Insurance and Annuity Association (TIAA) and the Honors College. This year’s lecture was co-sponsored by the Maine Business School.

Pool, Pints and Pedigree
“Cholo in Peru, Latino in the United States,” a lecture by Marco Aviles