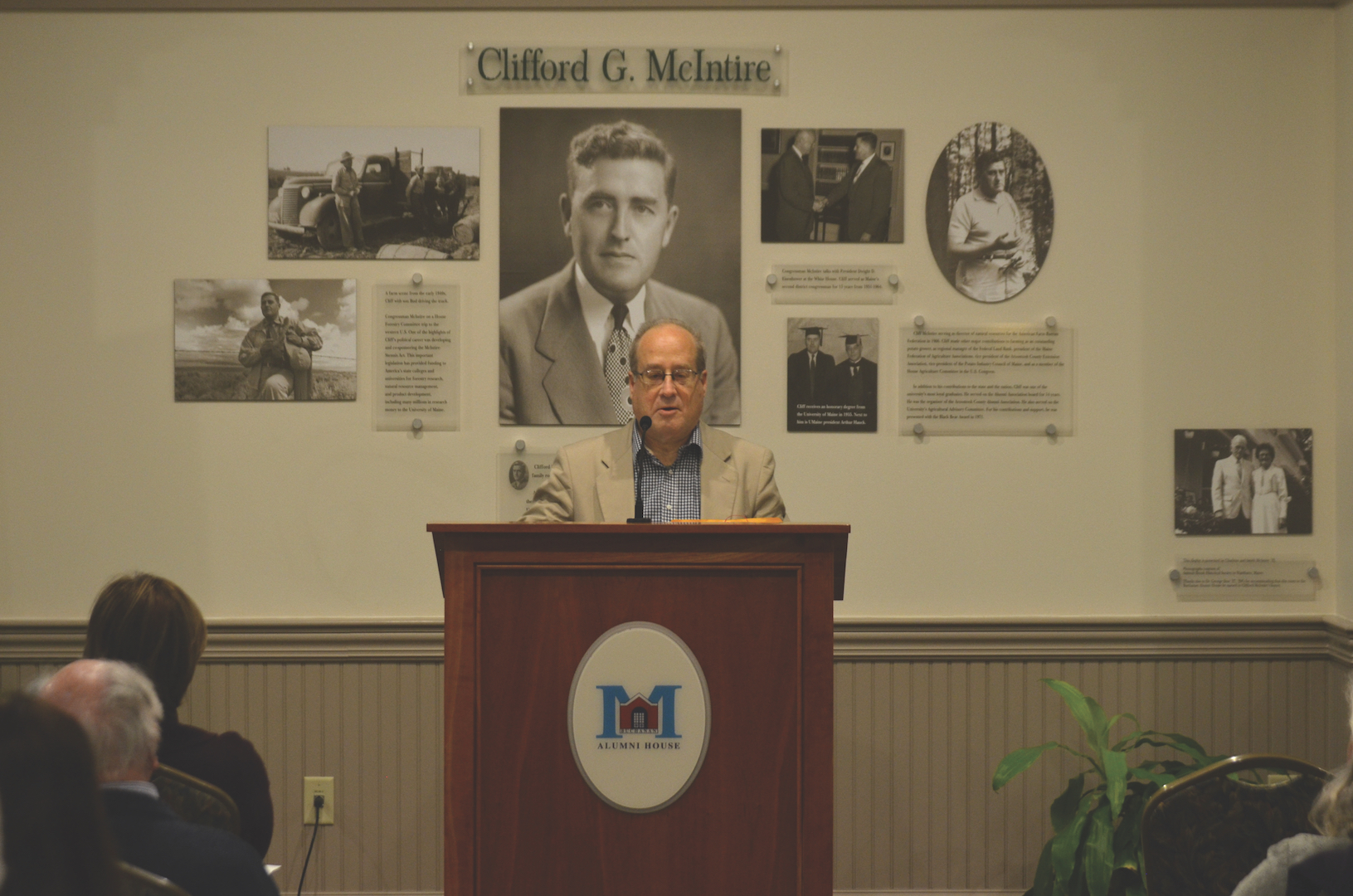 University of Maine professor of history Dr. Howard Segal presents his lecture, “Becoming Modern: The Transformation of the University of Maine, 1965-2015” at the Buchanan Alumni House on October 23rd. Photo by Ian Ligget, Staff

The Annual Maine Heritage Lecture was held on Monday, Oct 23. The lecturer, chosen by the Maine Heritage Committee, was Howard Segal, a University of Maine history professor who specializes in the history of technology and science.

Segal’s lecture was titled “Becoming Modern: The Transformation of the University of Maine, 1965-2015.” The lecture was focused on Segal’s recent article, “Re-Engineering the Land Grant University: the Kellogg Commission in Historical Context.”

According to the Association of Public and Land-Grant Universities, the Kellogg Commission was comprised of public and land-grant university presidents and chancellors. Twenty-five members of the Kellogg Commission, including UMaine’s President Peter Hoff, wrote six reports encouraging land-grant and public education universities to “return to the educational values and dedication of the past.”

According to Segal, the Kellogg Commission idealized the 1862 Morrill Act, which donated public lands to the states to be used as assets for the establishment of agricultural and mechanical professions. However, the history of the land-grant institutions is “not as simple or romantic as the Kellogg Commission made it sound,” Segal said.

According to Segal, faculty members were criticized for not being close enough to the student body. The Kellogg Commission encouraged deeper interaction between students and faculty members but left themselves out of this proposed interaction.

Segal also claimed that the Kellogg commission saw the Morrill Act as an “unprecedented wave of democracy in the United States,” but explained how Vermont Senator Justin Morrill, the bill’s sponsor, saw no role for women at land-grant universities.

Segal also mentioned the second Morrill act’s attempts to update the universities in the formerly Confederate states. According to “Colleges of Agriculture at the Land-Grant Institutions,” a report by the National Research Council, the second Morrill Act aimed to make sure potential students could not be rejected based on race. However, states had the option of maintaining segregated land-grant institutions. According to Segal, the non-white universities did not get the same federal funding as the white schools.

The lecture focused not just on the establishment of the land-grant universities. Segal also covered UMaine’s establishment as a land-grant institution and the struggles it had with other universities. According to Segal, influential Bowdoin Alumnus attempted to establish land-grant professorships at Bowdoin instead of UMaine. He also brought up an incidence in 1907 when UMaine sought permission to hand out unlimited bachelor’s degrees, and Bowdoin, Colby and Bates tried to block the effort. In the end, UMaine students lobbied the lawmakers in favor of UMaine’s proposal.

Segal then moved on to the establishment of the University of Maine System in 1968. Segal claimed that the president at the time feared that UMaine would lose autonomy and be marginalized in its role as the flagship university.

These fears may have been valid, according to Segal. He explained why having UMainee as a more elite campus is “not a crime.”

“Why is it ok to have different divisions of college athletes?” Segal asked while explaining the perceived hypocrisy in eliminating elitism from education.

Segal also mentioned that UMaine did not always follow the “returning to our roots” rhetoric of the Kellogg Commision. He cited Presidents Robert A. Kennedy and Susan Hunter’s focus on futuristic technology research and development such as the Advanced Structures and Composite Center and the Climate Change Institute. Segal sees these investments as a departure from the ideals of the Kellogg Commision.

Segal finished up with four principal challenges that UMaine faces: rejecting the idea that land-grant universities’ only purpose is to teach agricultural and mechanical professions, recognizing that there is no clear path to a successful land-grant institution and resisting the current “one-university” initiative which might lead to UMaine’s further loss of autonomy and elite status.

“We have nothing to apologize for and much to brag about,” Segal said.

After the lecture, Segal was presented with a framed copy of the invitation to the Maine Heritage Lecture. A second copy will remain in the Buchanan Alumni House.