Maine comes up short against UMD 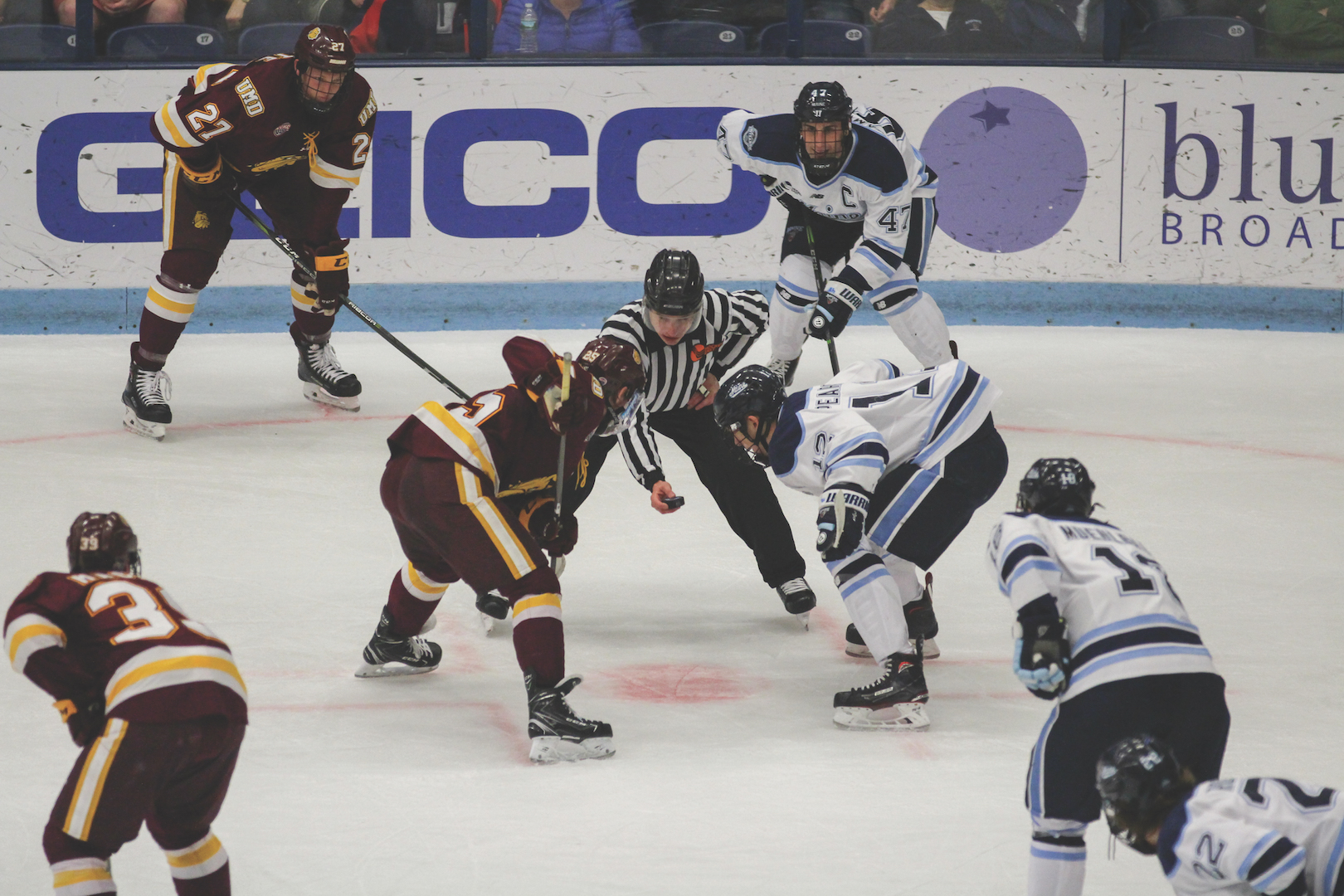 After an hour and 27 minute delay due to a power outage at the Alfond (and greater Orono area), puck drop finally happened just before 8:30 p.m. The Bulldogs got on the board quick with a goal 46 seconds into the opening frame. After forcing a turnover, fourth-year right winger Karson Kuhlman sent a pass to second-year forward Riley Tufte who was able to net his fourth goal of the year.

From there good goaltending would take over much of the game. Both the Black Bears and Bulldogs found themselves in an evenly matched game with a lot of back and forth play. Maine had plenty of chances to even the game up and finally did almost halfway through the final period.

The tie wouldn’t last long for the Black Bears though, less than two minutes later the Bulldogs answered. After a scramble at center ice, second-year forward Jade Miller corralled the puck and made his way towards the net. He sent a pass to third-year forward Billy Exel who then passed it right back where he then was able to beat third-year goalie Rob McGovern on a backhander. It was his second goal of the season and proved to be the game winner.

Despite the loss, McGovern played well, collecting 27 saves in net, including an incredible on a breakaway in the second period, keeping the deficit to one.

“I thought he played very well,” Head Coach Red Gendron said. “He was real sharp tonight and that was important. He gave us chances in the game.”

Unfortunately, the Black Bears were unable to take full advantage of those chances. But despite the loss, the team held their own after a shaky first period.

“It was a little bit of a slow start, but we got better and better as the game went on,” Gendron said. “We had lots of chances to score more goals and their goalie made some great saves, it is what it is.”

Not to be outdone, was Shepard, who played exceptionally in goal as well, stopping 26 shots, including a couple that came on breakaways.

“He played good, it’s what I expect, I knew it was going to be a tight low scoring game,” Minnesota Head Coach and former professional hockey player Scott Sandelin said. “He made a big break away save too,” Sandelin said, referring to what he thought was one of the momentum changers in the third period.

“They found a way to stick with it and gut it out,” Sandelin said of his teams gritty performance. “It was one of those games where you find a way to win. At the end of it, it’s a good road win. Maybe it wasn’t the prettiest game, but you take it and move on to tomorrow.”

The game was the first out of state game for the team this year. It’s also the first time the Bulldogs have played in Maine in 30 years.

Some of Maine’s best opportunities came on their final power play late in the third. They created many set ups, but could never finish. They generated two shots on goal, and had one bounce back on the ice, but never capitalized on it.

“We were pretty good on the power play. We had some looks but we could never finish off the plays,” Gendron said.

In the final minute in a half Maine pulled McGovern for the extra attacker. The team had more chances to try and knot the game up, but again struggled to finish off their plays.

For the game, Minnesota outshot Maine 29-27.

These two teams will square off on Saturday, Oct. 28, with puck drop set for 7:30 pm

“It was a hard fought hockey game, they obviously built a two- nothing lead. We played our best period in the third period, but the bottom line was we couldn’t find a way to bury our chances, we had several good ones that would have gotten us back into the game and maybe even won it for us,” Gendron said.

“They’re very structured, especially in the D-zone, they block a lot of shots. So getting pucks through was definitely difficult, so generating offense was bit of a challenge but as the game progressed we really turned up the dial and made a conscious effort to throw pucks on net to really test their young goalie,” Maine third-year defenseman Rob Michel said.

After a 15 minute intermission, the Black Bears were back on the ice for a tough second period. Despite coming out strong, UMD was able to squeeze the puck past Maine’s first-year goalie Jeremy Swayman. With only two minutes left in the period, Tufte, fed by third-year forward Peter Krieger, found the net, bringing the score to 2-0.

“They play hard. We knew they were going to be a hard hitting team. After they gave up a bunch of goals to Miami, they’d be a much better team defensively,” Sandelin said.

With how tough Maine played, Sandelin was pleased with the effort his team put forward.

“I can’t say enough about our effort by our guys. It was a good character win for our team, we deserved it,” Sandelin said.

It was in the third period the Black Bears truly showed up to play, attempting an all period record of 28 shots, 11 of which were on target. Also aiding Maine were UMD’s seven penalty minutes, giving Maine three different power plays. Unfortunately, the Black Bears were unable to convert any of those for points.

“That was definitely a turning point, they really came up with some big saves at the right time and they capitalized on the two mistakes we gave them and that’s what good teams do, they make you pay for those mistakes,” Michel said.

Michel had nothing but praise for Swayman, who played his tail off with little help from the offense.

“Jeremy’s confidence in the game gave us the chance to win and that’s all you can really ask for. We wouldn’t be remotely close to being on those situations in those close games if it weren’t for him,” he added.

“At the end of the day, full marks to their goalie and they’re team for sifting a couple by Jeremy Swayman who played very, very well for us,” Gendon said.

Swayman, a first year from Anchorage, Alaska, is the No. 12 goalie in the North American division. Earlier in the year, Swayman was drafted by the Boston Bruins in the fourth round of the 2017 NHL draft. At 6 feet 2 inches tall and 187 pounds, he is a force to be reckoned with. After the game, Swayman was honored as player of the game.

Although it was a rough weekend for the University of Maine Black Bears, the games will go on. Catch the Black Bears back in action Friday and Saturday, Nov. 3 and 4, as they battle against the University of Massachusetts Lowell. Puck drop is scheduled for 7:15 p.m. on Friday. Minnesota-Duluth heads to St. Cloud, Minn. to take on the St. Cloud State Huskies for a weekend series on Nov. 3 and 4. Puck drop is scheduled for 7:37 p.m.