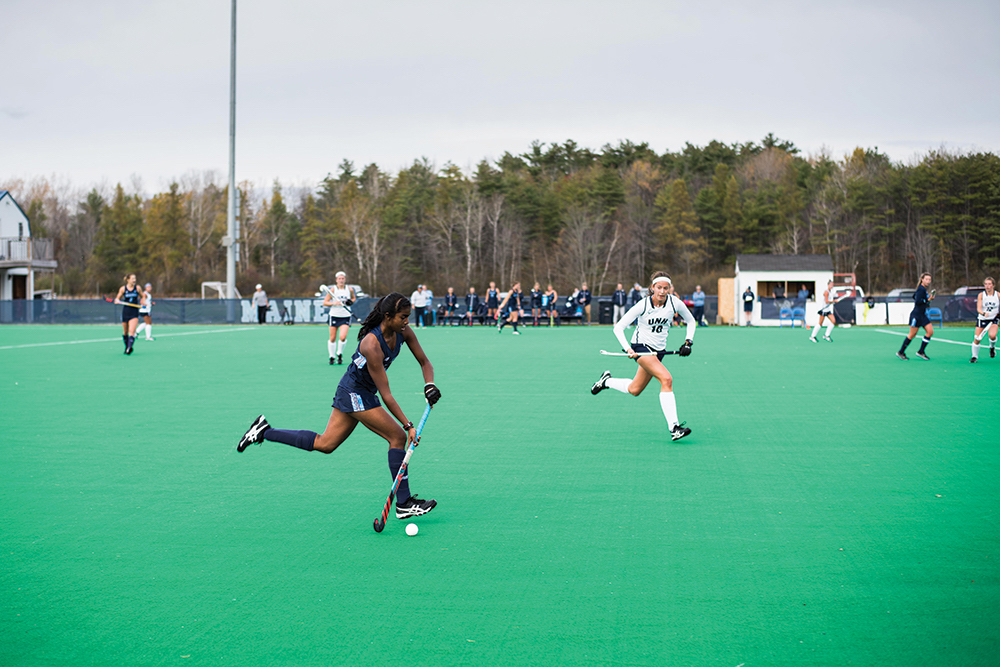 The No. 25 University of Maine field hockey team (12-5) traveled to Burlington, VT. on Friday, Oct. 27 to take on the University of Vermont Catamounts (5-11) in their last game of the regular season. The Black Bears defeated the Catamounts 1-0. The last time these two teams met was on Oct. 8 when the Black Bears hosted the Catamounts and beat them 4-0. Maine has topped Vermont in the last 12 times they’ve played each other since 1991. Third-year Libby Riedl is ranked 16th in assists per game (.67).

Starting in goal for the Black Bears was redshirt fourth-year Emma Cochran. Cochran was recently named America East Defensive Player of the Week after getting a shutout against the University of Albany on Oct. 22.

Starting in goal for the Catamounts was fourth-year Lena Benwood from North Vancouver, British Columbia. This season, Benwood has played in 11 games, making 85 saves and allowing an average of 2.29 goals per game. Cochran is also ranked 10th in goalkeeper win-loss percentage (.733).

In the first half, Maine put on the pressure but couldn’t capitalize on their chances. After 35 minutes of play, the game remained scoreless. The Black Bears led the Catamounts in shots on goal, 5-0. Maine also had two penalty corners but couldn’t convert.

Early in the second half, Cochran came up big when she made a diving stop on a dangerous Vermont attack, keeping the shutout alive. The Catamounts fed off of that opportunity and started to gain some attacking ground.

Third-year Casey Crowley made a run down the field with the ball and made a shot on goal but Benwood made a sprawling save. However, Benwood let out a rebound that second-year Brittany Smith pounced on and fired it top shelf over the shoulder of Benwood for her third goal of the season, making it 1-0 in the 59th minute of play. The Black Bears would go onto win, increasing their winning streak to five games. Maine led Vermont in shots on goal, 8-4.

Next up for the Black Bears will be their Senior Day matchup against the University of New Hampshire on Sunday.

Maine field hockey falls to the University of New Hampshire

It was senior day at the field hockey complex and the Black Bears were honoring Cochran, Madison Cummings and Emily Corbett. These seniors have led the Black Bears to a 53-25 record over the last four years.

Starting in goal for the Black Bears was Cochran who has had back to back shutouts prior to this weekend’s game and has held teams scoreless for the last 194 minutes. This scoreless streak has been the longest one in three years.

Starting in goal for the Wildcats was third-year North Grafton, Mass. native, Kelsey Rudert. Rudert has played in all 16 games this season, with a save percentage of .613 and a goals against average of 2.91.

In the first half, Maine had a few chances early but couldn’t capitalize. The game quickly became a back and forth battle when the Wildcats started to generate some offence of their own. Maine came very close to scoring when Riedl made a swift pass to Cummings but Rudert came up big with the save.

With 11:47 into the half, Maine received a good opportunity when they earned their first penalty corner of the game. Unfortunately, the Black Bears couldn’t execute which resulted in a loss of possession. The Wildcats were starting to press Maine in their own half, which caused a few turnovers.

Because of their pressing, New Hampshire earned three penalty corners in a row, but didn’t capitalize on any of them. However, the play remained in Maine’s half for the majority of the end of the half, which resulted in offensive opportunities for the Wildcats, but Cochran stood her ground to keep the game scoreless.

With seven minutes to go in the half, Maine capitalized on an offensive rush but it was deemed no goal by the officials. However, Maine fed off of that momentum when Riedl assisted on a Cummings goal with five minutes to go before half time. It was Cummings’ seventh goal of the season and Riedl’s 14th assist of the season.

The Wildcats then had their last chance before the end of the half when they earned a penalty corner with one minute left on the clock, but they couldn’t finish. After 35 minutes of play, Maine led in shots on goal, 9-5.

In the second half, New Hampshire came out buzzing when they started to generate a lot of offense early in the half. There was a scramble in Maine’s circle, causing Cochran to have to dive out of position, leaving the net wide open. The Wildcats tried to take advantage of the empty net but they couldn’t get a shot off.

The Wildcat pressure continued and resulted in a goal when third-year Katie Audino put the ball passed a sprawling Cochran, making it 1-1 in the 50th minute.

“Because it was senior day, I’m still very proud of our season and to be able to finish co-champions of our conference and win a conference championship, it’s only been our third year and this is the second time for the senior class. We now have to shift over to playoff mode,” Maine Head Coach Josette Babineau said.

The back and forth action continued for a big portion of the half, resulting in lots of chances for both teams. New Hampshire then converted on a penalty corner after a Maine foul. The goal was scored by first-year forward Bloem van den Brekel and assisted by Audino in the 64th minute, changing the score to 2-1.

“I was pretty proud of our performance. Maine is obviously a very strong team, they beat us in Durham. We were hoping we could generate a little bit more of an attack this game and I was really pleased with how we came out in the second half,” New Hampshire Head Coach Robin Balducci said.

The Wildcats kept their foot on the gas, creating several chances that made Maine’s defense work. Towards the end of the game, Maine decided to pull their goalie to try and even the score. With one minute left in the game, the Black Bears earned a penalty corner. There was a scramble right in front of the net but Maine couldn’t get it passed Rudert, resulting in a 2-1 loss.

“It was a really tough loss but we’re still conference champions so we’re just trying to go out with a positive. We’re playing the west teams now so we’re just going to watch a lot of film and get ready for the tournament,” Cummings said.

The Black Bears and the Wildcats return to the field when they travel to the University of Massachusetts Lowell for the America East Conference Championships. The first-round of the tournament will be played on Thursday, Nov. 2 and Friday, Nov. 3.