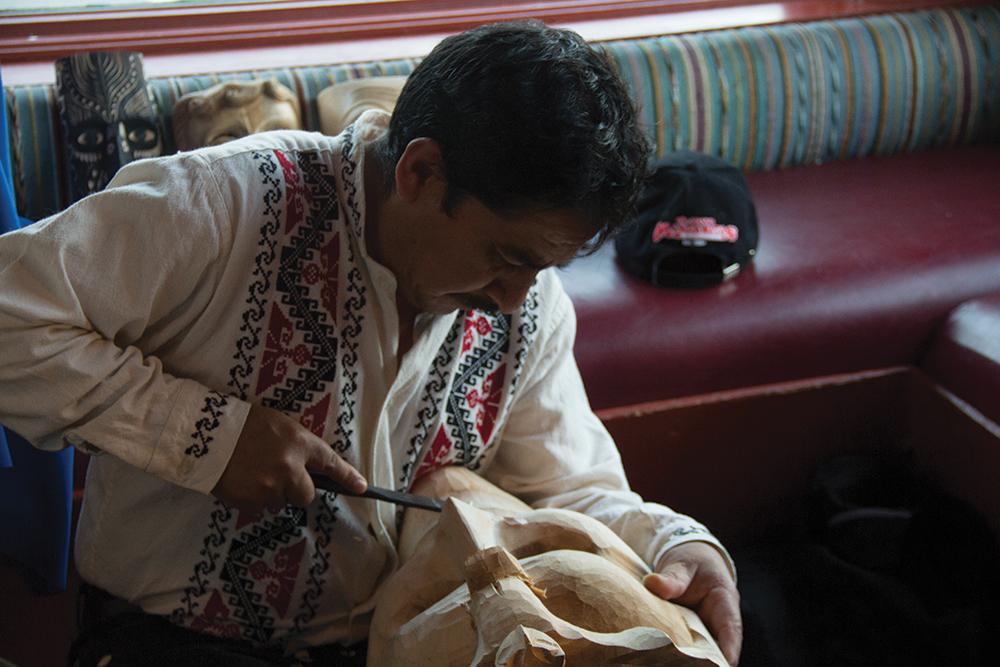 On Thursday, Oct. 19, Manuel Abeiro and Modesto Horta visited Margaritas restaurant in Orono to demonstrate their process of making traditional Mexican masks. The visit was a stop on part of the artists’ New England Tour which stops at museums and public schools.

Abeiro and Modesto have been making masks since they were children, and now both have over two decades of experience. Abeiro and Modesto were first taught the art of mask making in Tócuaro, a village in Michoacán, Mexico. The village sits on Lago de Pátzcuaro, or Lake Pátzcuaro, which is surrounded by other similar craft villages. They were originally taught the skill by Modesto’s father, Juan Modesto.

“Last year, we got to meet one of the professors over there [UMaine] at the Anthropology department and we went down to the vault and actually saw one of their father’s masks down there,” Modesto said.

The artists carved, chiseled and sanded away at the masks, which had been mere hunks of wood six hours earlier. Some masks can take anywhere from three days to a month, according to Abeiro and Modesto’s Translator, Pat Piccano.

The artists begin with a pick axe-like tool with a flat curved point. As the wood block shrinks, so do the tools. Most of the beginning work was done prior to the demonstration, which was held in a small corner of the restaurant to allow the use of the larger tools.

Smaller blades make more precise carvings, and facial expressions begin to appear. Abeiro and Modesto’s knife strokes are meticulous and decisive as they switched between a chipping tool, a sharp blade and a sanding tool.

Different masks have different meanings depending on the symbols on them. Influences from ancient indigenous cultures in South America, as well as Spain and other countries have led to new symbols being incorporated into the masks.

“Like the devil came from Europe,” Piccano said, pointing to a formidable demon like mask, “But then the Mexicans put the snake on. The snake is an indigenous symbol for good luck.”

Next to the demonstration was a table where the artists were selling full-sized and miniature masks, as well as jewelry. The finished carvings were painted with vibrant colors and intricate designs.

Piccano explained that for Abiero and Modesto, the New England tour is both a means to making money, and a way of sharing their heritage.

“In a practical sense it’s a way for them to open up more market for them to sell their work, but also so that the new generations don’t lose this. If they didn’t come up here, we wouldn’t know about it. So it can continue,” Piccano said.