Men’s hockey falls to Miami University (Ohio) in game one 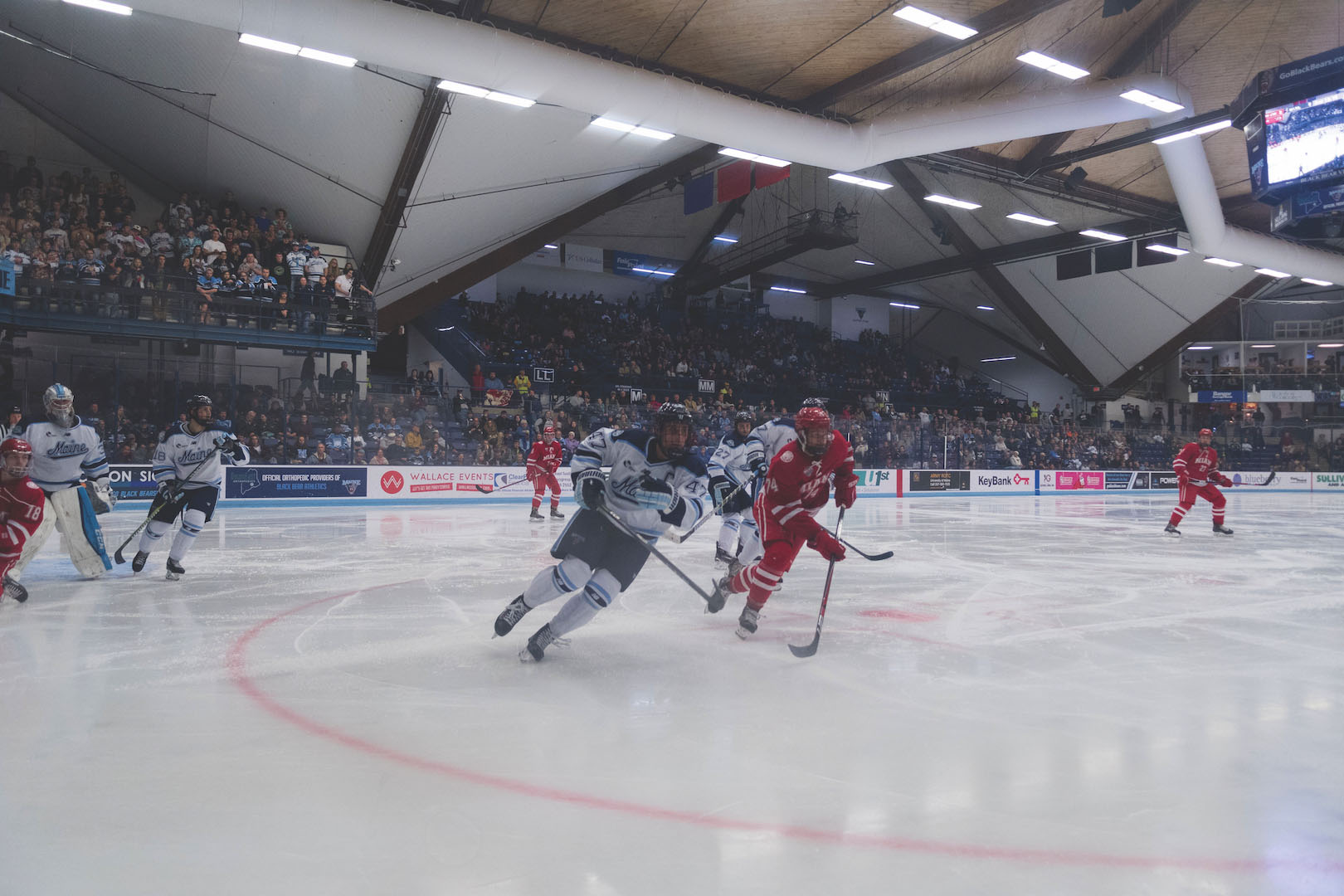 The University of Maine men’s hockey team (2-2-0) hosted two games against the Miami Univeristy (Ohio) Redhawks (1-3-0) on Friday, Oct. 20. The Black Bears fell to the Redhawks 7-5. The Black Bears and Redhawks met eight times prior to this weekend, with the Black Bears leading the series of 5-2-1.

On Friday, starting between the pipes for the Black Bears was third-year Weymouth, Mass. native, Rob McGovern. McGovern played in 29 games last year, starting in 28 of them and earning a .912 save percentage. He also earned the first shutout of his college career against the University of Connecticut. The net minder recently attended the 2017 Boston Bruins NHL Development Camp.

In net for the Redhawks was second-year Clarkson, Mich. native, Ryan Larkin. Larkin started 33 of 36 games last season and went 8-16-7 with 2.77 goals against average and a .910 save percentage.

With 3:02 remaining in the period, Maine had a two-man advantage when Miami took cross-checking and hooking penalties. However, the Black Bears couldn’t capitalize on the five on three. After 20 minutes of play, Maine trailed Miami 2-0. They also trailed in shots on goal, 19-7 and face-offs won, 16-11.

In the second period, Miami struck early again, having only played two minutes, when third-year defenseman Grant Hutton blasted a shot over the shoulder of McGovern for his second goal of the season, making it 3-0.

The Black Bears had another power play when Miami took a two-minute penalty for slashing. Maine finally capitalized when Tiuraniemi put it past a sprawling Larkin, scoring his first goal in a Black Bear uniform. The goal was assisted by first-year defenseman Alexis Binner and fourth-year forward Canon Pieper.

The Black Bears were just getting started. They ran the score to 3-2 when Robbins converted on an assist by Michel, completely shifting the energy in the Alfond.

The Redhawks put their foot back on the gas when Hutton scored his second goal of the night and his third of the season, making it 4-2 with 12:33 remaining in the second period.

Maine kept coming when Fossier jumped on an open puck in the crease, just slipping the puck over the goal line and past Larkin. The goal was assisted by second-year forward Patrick Shea  and Pieper.

The game was quickly turning into a back and forth battle when Miami’s third-year forward  Kiefer Sherwood scored with less than three minutes to go in the period. Miami felt the momentum when fourth-year defenseman Louie Belpedio converted on the power play for his first goal of the season, making it 7-3 to end the second period.

To start off the third period, Maine made a goalie change, putting first-year Anchorage, Alaska native Jeremy Swayman in for McGovern, who faced 26 shots. However, just eight seconds into the period, Green had a breakaway and made no mistake putting it five-hole on Swayman, making it 7-4.

Maine then went on the powerplay early when Miami went off for a hooking penalty. The Black Bears capitalized on the advantage when first-year Eduards Tralmaks put a clapper right by Larkin, scoring his first goal of his collegiate campaign, making it 7-4.

Michel then made it 7-5 when his wrist shot from the point went right over the Larkin’s glove. The goal was his second of the season.

“We took some unnecessary penalties that caused us some problems and we didn’t manage the puck the way we needed to and that also caused us some problems,” Maine Head Coach Red Gendron said. “It really just comes down to that, consistency of getting over top of the puck, as opposed to reaching in with your stick. We need to make some adjustments for tomorrow night’s game for sure.”

Unfortunately, Maine could not fill the two-goal deficit as they would go on to lose 7-5 in game one of the two game series.

The two teams will square off again Saturday night.

Maine played their second game against the Miami University (Ohio) on Saturday, defeating the Redhawks 6-3 to tie the series.

Getting the start between the pipes for the Black Bears was Swayman, who replaced McGovern for the third period in Friday’s loss, finishing with two saves.

Larkin was back between the pipes for the Redhawks. He finished Friday night’s game with 20 saves while allowing five goals.

“We knew we needed to start big and play Maine hockey. I got the puck and I put it in the net and got the boys going. Tonight, the team played really good hockey,” Tralmaks said.

Maine scored again when Keeper ripped a one-timer from the top of the left circle, making it 3-0 8:07 into the first period. The goal was assisted by Tralmaks.

The Black Bears then made it 4-0 when Holway made a slick pass to Shea.

Maine then converted on the power play when Fossier hit a one-timer right over the shoulder of Larkin to make it 5-0. The goal was assisted by Keeper and Holway.

“Friday night we didn’t do the little things right but tonight we did. It was nice having Patrick Holway back, he’s one of our top defensemen, you guys saw it tonight. He made some unbelievable plays and he’s just solid back there defensively,” Fossier stated.

Miami finally got on the board when first-year forward Phil Knies put it past a sprawling Swayman, making it 5-1 to end the period.

In the second period, Maine made it 6-1 when second-year forward Tim Doherty patiently wrapped around the goalie and tucked it in an open net.

Miami then had a 5 on 3, which resulted in a power play goal by Hutton, making it 6-2. It was Hutton’s fourth goal of the season.

The Redhawks pulled their goalie with 5:16 left in the game, hoping to fill the four-goal deficit. They then converted on a Black Bear penalty when Hutton put a wrist shot over the shoulder of Swayman, making it 6-3. The final horn blared with that score standing.

“It was a good response from the team, everyone responded well, I’m very pleased. The penalty kill was much better,” Gendron said.