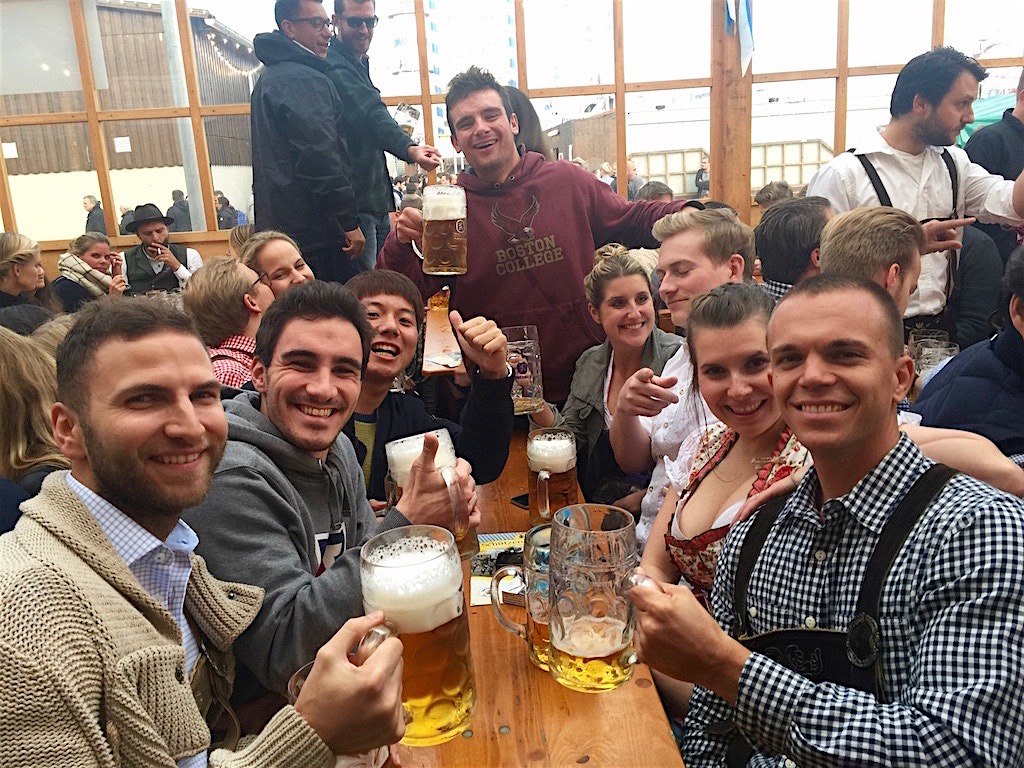 Griffin Stockford celebrating Oktobefest in Munich, Germany on Oct. 1. Courtesy of the writer.

When I woke up on the morning of Monday Oct. 2 shivering under the cold, wet Bavarian dawn, with no money in my wallet or recollection of returning to my tent, and minimal time to get to the airport, I knew Oktoberfest had gotten the best of me. But I also knew that I had gotten the most out of Oktoberfest.

Throughout the month of September and into October, there are Oktoberfests held all over the world. The foremost of these celebrations is in Munich, Germany. Naturally, my buddy Lex and I had to make our pilgrimage to the Oktoberfest mecca of Munich. And maybe have a few steins along the way. Our hajj for hops, if you will.

I met up with Lex, a Frenchman I met working at a dude ranch two summers ago, at the Stoke Travel location where we would be staying. My dad found the company online and forwarded me their info, saying it might be a good option. The prices were extremely cheap (we would be staying in a tent), they were a short bus ride away from the festival and they sent me emails starting with “Hey there Legend” and “Are you ready for the hedonistic mayhem that is Oktoberfest?” I put on my Hunter S. Thompson hat and prepped my pen for battle.

The Stoke Travel tent compound was the closest thing I’ve ever seen to what I picture a 1960’s hippie festival would be like. The employees drank beer on the job and some of them seemed pretty out of it. There was a distinct lack of clothing, spanning across all genders and ages. The men’s bathroom had one communal roll of toilet paper for eight stalls, so you had to make sure you knew how much you needed before going in. And surrounding the bar area was a sea of small tents, which were big enough to fit two small air mattresses and protective enough that you woke up with clothes that were just damp, not wet, after a rainy night.

After spending the first night taking advantage of the unlimited drinks package and making acquaintances with people from Austria to Australia, we got up on Sunday, Oct. 1 and headed to the mothership. The surrounding area in Munich was surprisingly quiet, but once we entered the actual festival, we realized why we had come so far. There was traditional music, fine German cuisine and giant beer tents all around. And rides, I suppose for the kiddos. Send them off with Heike the nanny while you drink enough Lowenbrau to get you to the new year.

Lex and I sauntered up to our first beer tent, jittering with excitement, until the security guard saw our Stoke Travel bracelets and said “no Stokes!” Apparently our accommodations had built up quite a reputation. I can’t imagine why they would want to discriminate against those staying at a campsite with unlimited beer and sangria. Surely over-inebriation can’t be a concern!

We spent the rest of the day hopping from tent to tent, listening to live bands, sometimes making it inside a tent to sing and party. The insides of the tent are where it’s popping, but it’s incredibly hard to get a seat. Everybody is up on tables belting out classic tunes and dancing their hearts out while waiters and waitresses scurry around and yell at the people in their way.

It was at the Lowenbrau tent that Lex and I got our true Oktoberfest experience. The tables are big, and since there were just two of us, we were seated with eight other people. With steins flowing, we laughed and joked all night with a Korean guy, some Germans and a couple Brits. It was everything I had hoped Oktoberfest would be. People that would probably never see each other again were just having a good time, enjoying the spectacle of it all and reveling in celebration.

The seasonal cold beckons, and so does some Nyquil — and with it some Nyquil-induced dreams of Oktoberfest (I know Heike the nanny is going to appear in some regard and I’m terrified). Until next time, Black Bears.