‘Only the Brave’ pays tribute to the fallen firefighters 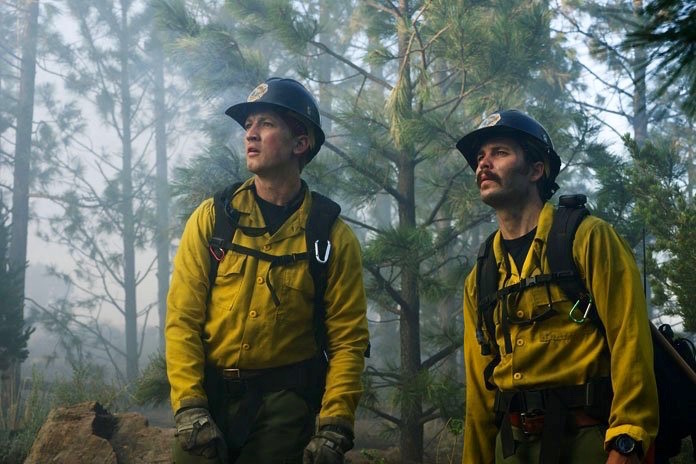 Based on the true story of the Granite Mountain Hotshots, 'Only the Brave' hit the theaters on Oct. 20. Photo courtesy of Sony Pictures.

‘Only the Brave’ starring Josh Brolin, Jeff Bridges and Miles Teller, tells the story of Arizona’s Granite Mountain Hotshots and the June 28, 2013 fire in Yarnell, Ariz. This wildfire killed 19 firefighters, making it the greatest loss of firefighters in the United States since the Sept. 11 attacks.

The main storyline in ‘Only the Brave’ is centered on Eric Marsh (Josh Brolin) and his role in creating and training the City of Prescott’s only municipal Type 1 handcrew of 20 firefighters who are the first responders to the wildfires. Hence the name “hotshots,” referring to those brave few who get to engage with the fire directly. Through friendship, teamwork and immense discipline, the Granite Mountain Hotshots become one of the nation’s most elite firefighting units.

Miles Teller plays Brendan McDonough, the sole survivor from the 20-man crew. After becoming a father, 21-year-old McDonough came to Eric Marsh looking to turn his life around from being an addict to becoming a hotshot.

For this movie, the actors met the family members of firefighters. As the filming went on, the family members visited the movie set, including Eric Marsh’s wife Amanda Marsh, who pointed out to Brolin the things he would and wouldn’t say. The movie followed Eric Marsh’s relationship with his wife, the arguments they had, the happy moments they shared and the jokes they made. This portrayal of a marriage made the movie more relatable. Jennifer Connelly plays the role of the wife for whom it gets harder and harder to “share her husband with the fire.” In addition to honoring the firefighters, this movie sheds light on the families of these men, and the immense strength and endurance they must posses to be able to support their loved ones in this dangerous profession.

In addition to capturing human dramatic emotions, there were several comedic scenes where one could not help but laugh out loud at the inappropriate jokes that the firefighters made. These jokes and stories come from McDonough’s recollections of his fellow hotshots whom he calls brothers. It is quite clear that Director Joseph Kosinski could not have written something so genuine even if he tried to.

Throughout the movie, I could not help but wonder how the director achieved such realism that could only be attained through making a real fire. The visuals of the wildfires were truly spectacular, making the landscape shots one of the highlights of the movie. They were pristine, breathtaking even. There are numerous scenes of stoic, still mountains calmly presiding over the flaming fire that raged upon the trees with centuries’ worth of history in them.

It was felt throughout the movie — the director’s careful attempt to do the movie justice. This is a story of heroism and heartbreak, hope and determination, courage and sacrifice, a story that has to be told. Before the credits rolled through, one by one there came pictures of every firefighter who lost his life to the Yarnell Hill Fire. This was a touching gesture and a necessary ending which completed the movie.