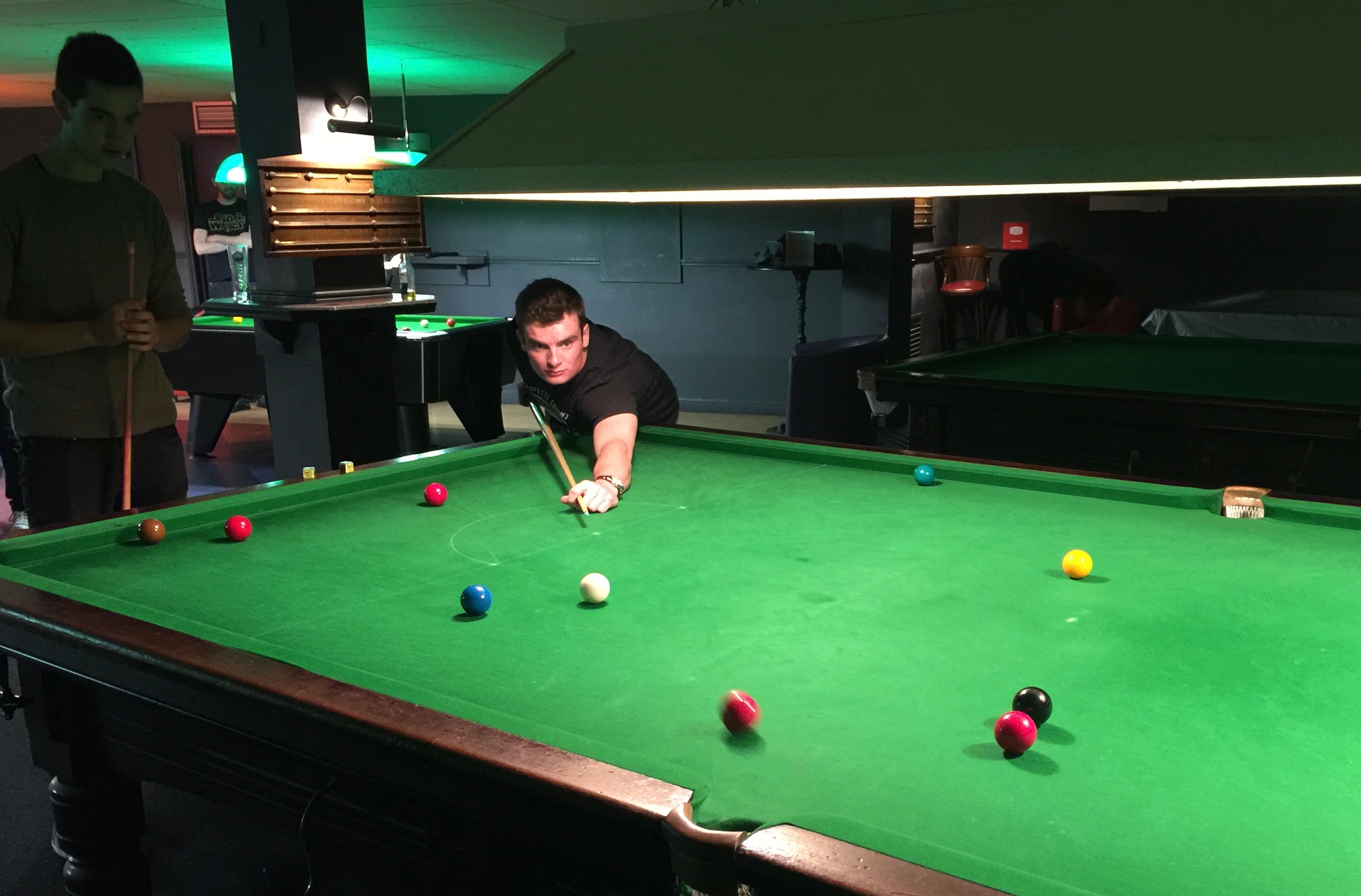 Photo courtesy of the author.

In most pubs in Aberdeen, Scotland, there is a dartboard, a pool table or both. Though I haven’t played much darts, I did grow up playing pool at the daycare my friends and I went to until the end of fifth grade. Our daycare provider had a slightly smaller-than-regulation table in her basement, so we would go down there and make bets on pool games involving the loser eating a pre-established number of pieces of the daycare provider’s dog food (intended, of course, for her two Rhodesian Ridgebacks). Gross, I know, but it was the only accessible and acceptable form of punishment we could scrounge up and, in retrospect, it surely put hair on our chests. Thus we quickly discovered a love for Pedigree (an acquired taste we told ourselves, though I don’t think any of us ever acquired it), gambling and, most importantly, pool (between episodes of Saved By the Bell, of course).  After rekindling the fire with a decent amount of time chalking up the cue in bars and saloons in Wyoming this past summer, I was pleased to discover that the University of Aberdeen had a pool society.

It seems almost too good to be true: $10 at the start of the semester and from then on, unlimited pool on Wednesdays and Sundays. The meetings take place at one of two pool halls. The larger one, called Riley’s, is in the center of the city and probably has upwards of 30 pool tables, as well as multiple snooker tables. A game invented by British Army officers stationed in India in the 19th century, snooker is similar to pool but it is played on a much larger table, involves many more balls, and involves a significant amount of strategy. I haven’t been able to play snooker all that often, as it also takes a bit longer than pool, but I look forward to discovering its nuances during meetings to come.

Pool might be the perfect game for a male in his early 20s whose dreams of playing in the NBA fell through but who enjoys competition, a few pints and some good conversation. And by conversation I mean about 75 percent trash talk. It seems every week there’s a president’s game to determine who truly is the president between the two lads who founded the group, and it’s always entertaining and funny. It really is a great time as there are a lot of people from a lot of different countries in the society and it’s really more about hanging out and having a good time than it is about the pool itself. The leaders of the society have done a great job and it’s definitely something I look forward to every week. The game of pool certainly lends itself to the Scottish tendency toward conversation. A game can go as fast or as slow as the two people at the table want it to go. And yes, Mom, there are women there too. Yes, they usually beat me. No, they haven’t shoved dog food down my throat; that was daycare only.

On a different note, I feel as though I’ve encountered noticeably fewer shy people here, which I don’t think is coincidental but rather the product of a culture of people who have both a knack for conversation and a love for it. Even the reserved folks in Scotland have something to say. Small talk is abundant and not seen as a chore. It seems people are more open to sharing their opinions with people they might not know very well, whether it be politics, pop culture or, God forbid, football.

On a rare sunny day, a walk through Seaton Park beckons, and so does a wee dram of Famous Grouse. Until next time, Black Bears.