Take Back the Night Offers Solace to Survivors

Home /Culture/Features/Take Back the Night Offers Solace to Survivors 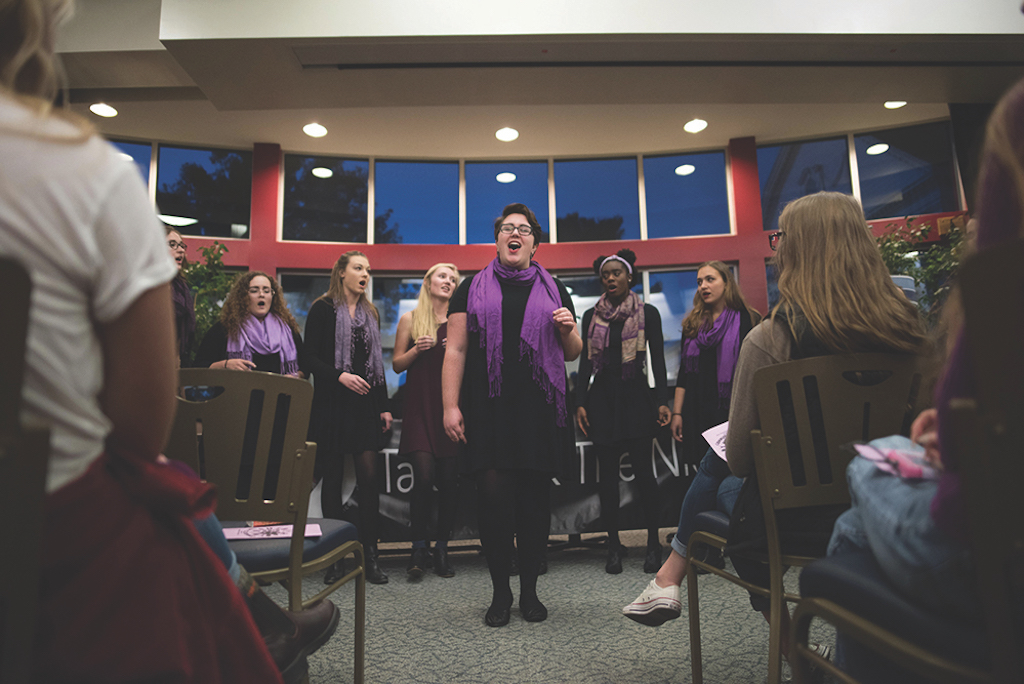 UMaine’s all female identifying a cappella choir, Renaissance, opens Take Back The Night hosted by The Feminist Collective on Oct. 17. Photo by Maggie Gautrau, Photo Editor.

Last week, a story broke across the United States that shocked many, but not all. The sexual assault allegations against Hollywood mogul Harvey Weinstein have racked up since the story first emerged, and although the scope and details of the allegations have come as a surprise to some, for many others this is just another sad reminder of an epidemic problem in this country. To express this, many women (and some men) have taken to social media to post the hashtag #metoo to show solidarity and prove the magnitude of cases of sexual abuse, assault, and violence that happen in the world every day. This has prompted a national discussion about sexual violence in this country and the roles we all play in it.

Last Tuesday, Oct. 17, the University of Maine community came together to show support of this issue in their own way, the annual Communities Unite: Take Back the Night event. Hosted by the Feminist Collective (formerly known as the Student Women’s Association), the event took place in the North Pod of the Student Union and is explained on the provided pamphlets as “an opportunity for survivors of sexual assault and domestic violence to share their experiences in a supportive environment.”

The pamphlet went on to explain, “We acknowledge that the discussion of sexual assault and domestic violence can cause extremely emotional responses in other survivors of these traumas.”

oduced the event and prefaced it with a trigger warning and a clear message that those who are not ready to share their stories are in no way obliged to. They spoke about the importance of giving platforms to survivors to use in their healing processes, as long as they are in confidential and supportive environments.

UMaine Renaissance, the all-female a capella group on campus, began the event with a performance of three emotional acapella covers. The group dressed and accessorized in purple to show solidarity with domestic abuse and violence survivors.

Following Renaissance’s performance were guest speakers representing a variety of resources on hand at the event, starting with Sam Saucier from the Women’s Resource Center. The Rainbow Resource Center, Mabel Wadsworth Health Center, Rape Response Services, Maine Family Planning, Partners for Peace and the UMaine Counseling Center also had representatives speaking at the event. Dean of Students Robert Dana was not scheduled to speak but spoke anyway about how sexual assault affects college campuses, and how his heart goes out to those who have been affected on the UMaine campus.

Following the appointed speakers was a designated survivor speak out, an opportunity for anyone to stand up and share their stories. All of what was said is confidential, and the environment of the room was respectful and supportive. Some survivors shed tears as they opened up their hearts and pasts to the audience, and many viewers felt compelled to cry as well. The stories all revolved around surviving incidents of sexual assault, stalking, date rape, domestic abuse and sexual harassment. The mood was tense, and many shared stories still ripe with raw emotion. Several survivors expressed gratitude at being given the opportunity to speak, and credited speaking out about their experiences as crucial to their healing processes. The outlet proved helpful to many, and the speak out lasted almost two hours.

When events like this occur, they not only offer support and resources to those still struggling to come to terms with their experiences, but they also serve as a call to action.

According to the Rape, Abuse & Incest National Network (RAINN), “every 98 seconds, an American is sexually assaulted.” This adds up to 321,500 victims (age 12 or older) of sexual assault and violence each year in the U.S. There are countless contributing factors aggravating the issue, and too often these incidents go unreported. Events like Take Back the Night raise awareness to prevent such statistics from happening.

There are organizations working to replace rape culture with something called consent culture. In their mission statement, an organization called Only With Consent states their, “need to encourage dialogue about asking for consent because it will promote an understanding that each person knows what is best for themselves. This will empower children and adults alike to respect one another even if the end result is not what they had hoped.”

All of the stories shared at Take Back the Night were raw, heartbreaking and completely preventable. They all had something in common; there was a lack of consent. The underlying message of the event was that sexual assault is preventable and there needs to be a shift of blame from the victims to the people who broke their trust through a lack of consent.

After the survivor speak out there was a short intermission for people to collect themselves and reach out to the resources present. While many people filtered out, a sizable group remained and progressed outside to begin the candlelit march portion of the event. Jackets were zipped up and candles were lit, and the group began marching across campus reciting catchy and empowering chants. Some examples of chants included, “We have the power, we have the right, the streets are ours, take back the night;” “Join together, free our lives, we will not be victimized;” “Assault strikes 1 in 4, we won’t take it anymore” and “We are bold, we are strong, we have suffered far too long.” These chants were created to encourage survivors to band together and reclaim the night, empowering themselves and each other.

The night culminated in a moment of silence to commemorate those lives lost to domestic and sexual violence, and to support those still suffering. Participants exchanged hugs, tissues and phone numbers, and Loftin alerted the crowd that a decompression space would be available the following day in the Women’s Resource Center.

If you or someone you know has been affected by sexual assault or domestic violence, know there are resources on campus and in this community to help. Some of the resources include the Counseling Center (207-581-1392), Rape Response Services (1-800-310-0000) and Partners for Peace (1-800-863-9909). For more resources on campus, reach out to the Women’s Resource Center, Rainbow Resource Center and the Office of Sexual Assault and Violence Prevention. If you are interested in learning more about the Feminist Collective, they hold their on Mondays at 6 p.m. in the Walker Room of the Student Union.