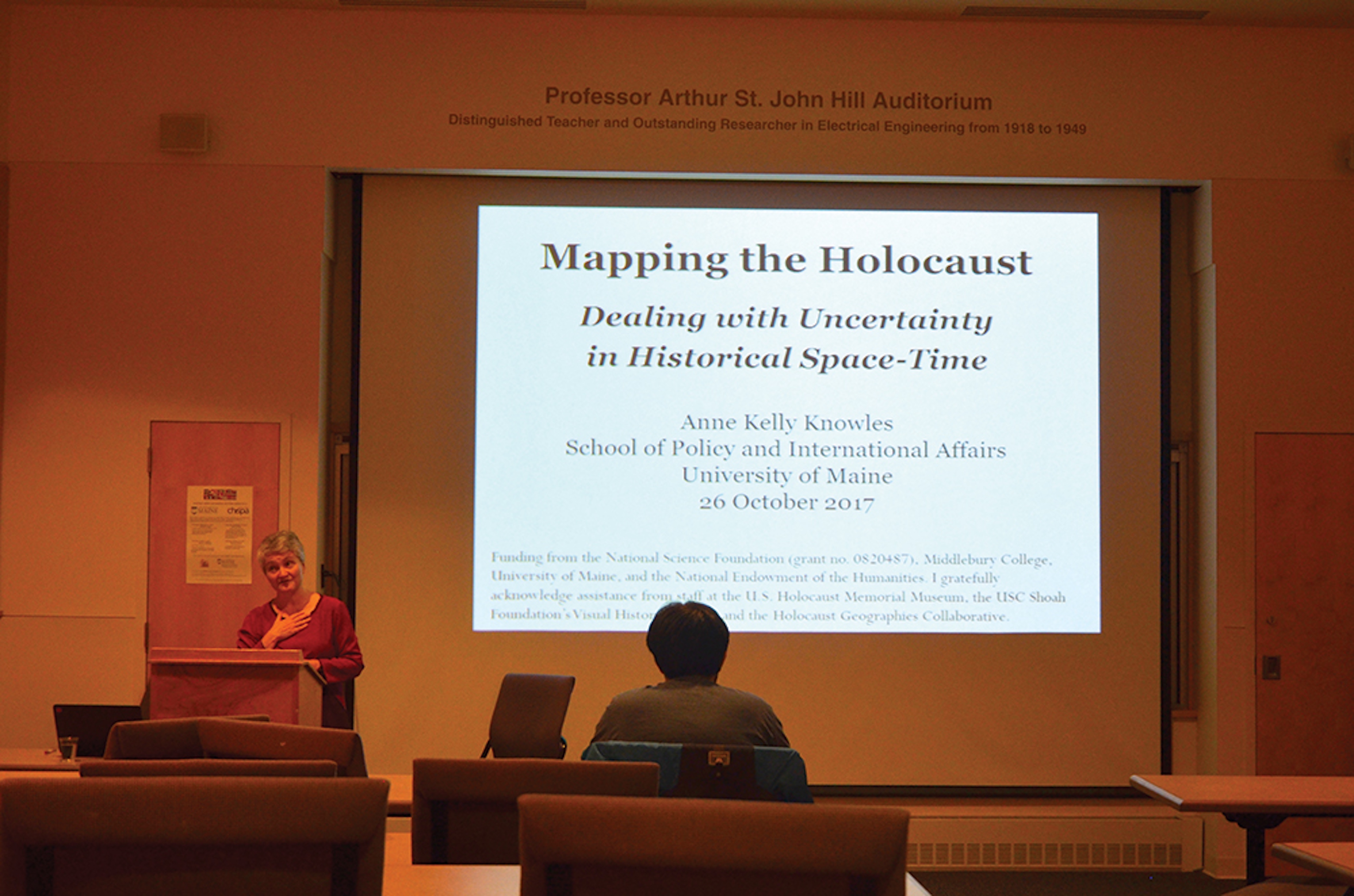 Dr. Anne Kelly Knowles, in association with the School of Policy and International Affairs, presented her lecture “Mapping the Holocaust: Dealing with Uncertainty in Historical Space-Time” at the Hill Auditorium in Barrows Hall on Thursday, Oct. 26 from 5 to 6 p.m.

Dr. Knowles is the co-founder of the Holocaust Geographies Collaborative, a multi-institutional research group of 15 geographers, cartographers and historians, and hundreds of undergraduate and graduate students who have volunteered since its formation in 2007. Their goal is to “develop new methods to fill interstices about what we think we know about the Holocaust, but may not know nearly as well as we believe.”

The key to the group’s projects lies in the development of Geographic Information Systems (GIS), filling databases with historical and textual information about the Holocaust, and displaying that information geo-visually, to allow further analysis and understanding.

“It’s a whole class of software…that basically enable you to map information, if it has location attached. And it turns out that about 95 percent of the information that humans have ever created has location associated with it in some way or another… almost any field of inquiry is open to geographic exploration,” Knowles said.

Databases provide context for case studies of any kind, and the Holocaust is no exception. Any large phenomenon contains variation at the national, regional and local scale. Digital desegregation helps highlight these variations, compare populations and effect, and connect information to draw new conclusions. Data maps of cumulative territory changes from 1938-1945 were used to examine datasets of both SS camps and over 1,300 eastern European ghettos, filling in the gaps in the traumatic memories of survivors recorded several decades after the events.

Perpetrator records, survivor testimony and documents provide information that, when cross-referenced and displayed together, create new ways to examine the scope of the the Holocaust.

“Since the publication of our first book, ‘Geographies of the Holocaust’ in 2014 [and the now-thriving and exploding status of digital humanities] …We now clearly see a digital and spatial turn in Holocaust studies,” Knowles noted. New digital approaches have created projects that are “pushing the boundaries of Holocaust scholarship,” she said.

Such projects from associated scholarship groups include Dr. Caroline Sturdy Colls’ forensic archaeological findings at the site of the Bergen-Belsen POW and concentration camp. These are combined with original photographs and documents to create a 3D reconstruction of the camp before it was burned down by the British 11th Armoured Division. Also included is the USC Shoah Foundation’s “New Dimensions of Testimony,” where Holocaust survivors answer thousands of questions over five days of recording with 3D cameras, to create voice-activated holographic displays that can hold conversations with classrooms, so they can share their traumatic experiences long after they’ve passed on.

“I think of it as an act of translation, how to translate textual history into this radically different format of a database. It requires interpretation, it requires scholarship, and it’s a marvelous teaching tool…It’s the historian’s craft. So, as you see, I’m an advocate for this approach, but I never want to make it sound easy,” Knowles said, before concluding.“I hope to bring more and more to this University, because I think it benefits everyone.”

Funding for the project is provided by the National Science Foundation, Middlebury College, the University of Maine and the National Endowment for the Humanities, with assistance from staff at the U.S. Holocaust Memorial Museum, the USC Shoah Foundation’s Visual History Archive and the Holocaust Geographies Collaborative.