Tuesdays at the IMRC hosted Luciano Chessa for the visiting artist series on Oct. 17. Photo by Evan Loignon, Staff.

For the third installment of the Tuesdays at the IMRC series, the University of Maine’s Innovative Media Research and Commercialization Center (IMRC) hosted a performance by visiting artist Luciano Chessa on Oct. 17.

In a small performance space, under hazy purple and green lights, 24 seats were intimately woven around an odd collection of instruments and objects. Images were projected onto the black curtain background and inadvertently many of the instruments were as well. Through the fumblings of a last-minute sound check, the audience took their seats. Due to the closeness of the seating, a person’s choice of chair dictated their perception of the performance.

The lights dimmed as the first performance began, and Chessa casually approached a large bass drum. A static-like noise filled the air. During his unamplified performance he utilized many unexpected objects such as a kitchen sink, electric toothbrushes, a leaf, a zither and a canvas. The proximity of the artist to the audience made the usual veil of privacy nonexistent, exposing the artist’s method and emotions.

Luciano Chessa is a composer, performer, conductor and musicologist from Sardinia, Italy. He teaches music history and literature classes at the San Francisco Conservatory of Music. In his work as a musicologist, he has conducted extensive research and written many articles discussing the relationship between the musical machines of Leonardo da Vinci and the intonarumori, a group of experimental musical instruments built by Luigi Russolo. 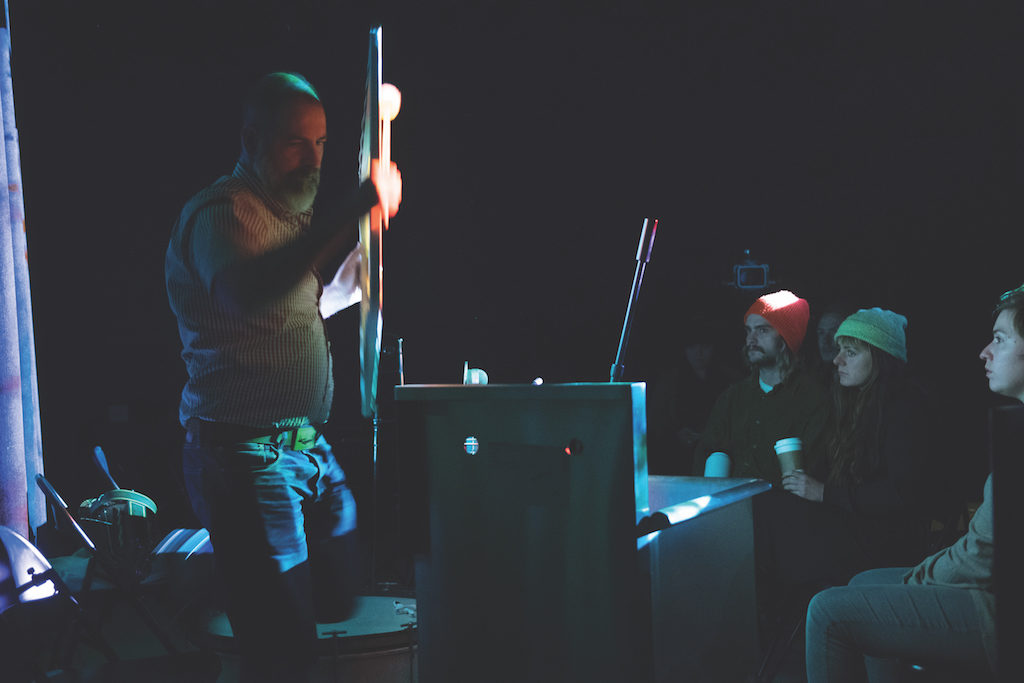 The evening’s performance was not exclusively musical. The images projected were all made or taken by Chessa, and the blank canvas that had previously been used to create vibrations at one point became a visual prop. As he moved the canvas around the space, elements of the projected images and the music were transformed and highlighted in new ways.

After his solo performance, Chessa invited Steve Norton and James Winters to join him on stage. As Chessa returned to his drum, Norton stood behind a celesta, which looks similar to an upright piano, and Winters sat with a hurdy gurdy, a type of a stringed instrument, in his arms. Led by the rattling of a set of keys, the second act was complete improvisation.

Winters, a third-year graduate student pursuing his master’s in fine arts in visual and audio work, arrived at the performance unaware of what exactly would be created that evening.

“I had never met him and he insisted on no rehearsal. I was asked to play the day before. We had no score. We did sound check but that’s all. We walked together and talked. That was the way we ‘rehearsed,’” Winters said.

This did not, however, stop the trio from showing the audience why improvisational work is important.

“As artists, we know the rules, and then the composition suggests breaking or bending a rule. That is the magic of it,” Winters said. “We veer off on an accepted way, so I suppose this presumes that we start with ordinary training in music until something affects our entire approach to music. To approach the stage as a ‘bench for experiment’ is quite a radical idea.”

After their performance, the artists embraced while the audience clapped. The evening ended with a Q&A, where audience members asked Chessa about his work and instruments. There was much discussion regarding a small leaf which had been on Chessa’s drum. The artists expressed his desire to include something from his day into the show. When discussing the format and environmental choices, Chessa claimed no desire to affect or control the audience’s interpretation of his art. He merely stated, “As you get closer to the source, you are able to see in greater detail.”

For their next event, the IMRC will be hosting a faculty lecture with Jon Ippolito and Joline Blais on Nov. 7 from 7-9 p.m. The events are free and open to the public.