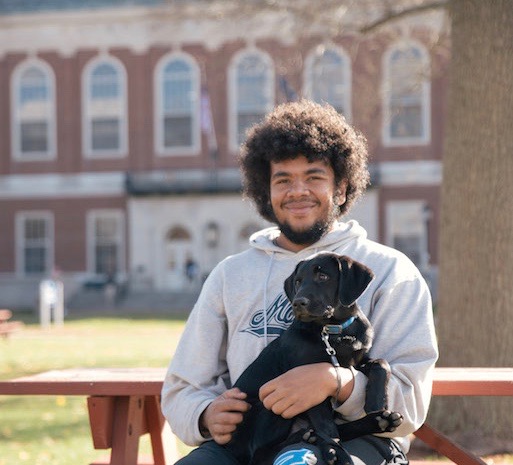 On a sunny Friday afternoon, third-year student Kaleb Traverso-Penn was sitting on the mall, with a chocolate lab by his side. The first thing he said on being approached was, “It’s not my dog, but you can pet it.”

This is not a rarity for Traverso-Penn. He has built a relationship with professors and staff on campus where when they bring their dogs to work, he takes them for a few hours and will take them for walks and play with them before bringing them back to their owners.

When asked about it, he said, “Walking dogs is more of a hobby. I don’t charge anyone.”

It all started out about a year ago when Traverso-Penn befriended a professor and offered to walk her dogs.

“I just randomly walked into her office and we started talking. We sort of developed a friendship and then I was like, ‘If you want, I can just walk your dogs for you while you work.’”

Now it has become a regular occurrence. Traverso-Penn currently walks six dogs and whenever professors have them on campus, they call or text him to see if he’s not busy to take the dogs and play with them.

“As long as the dogs are tired by the end of it, then I did a good job,” he said.

This isn’t just a nice weather hobby either. He does it year round, no matter what the weather is.

Since he lives on campus, he can’t have a dog, but if he could, he would get one in a heartbeat. “I kinda want a husky lab mix,” he said.

When asked about horror stories, he said he didn’t really have one, but he did have a funny story.

“One of the other dogs I watch loves puddles. We were out by the field hockey field, in the back where it’s all grassy. And we were playing frisbee and he brought it back to me and then he went over to the side. And I’m like, ‘Please don’t let there be a puddle there.’ And he looks at it, then he looks at me, I was like, ‘Don’t you even think about it.’ All you heard was ‘splash.’ I brought him back all wet and she’s [the professor] like, ‘What happened?’”

It’s not just the dogs he walks that he loves. It’s all dogs in general.

“I love dogs so I’ll just walk up to any dog and play with it. Most dogs I’ve seen I just go up to their face and if they growl, well I’ll fight them.”

In addition to his dog-walking hobby, Traverso-Penn is also studying new media with a graphic design minor. He describes it as being similar to computer science, but with many different directions that he could explore.

“I’ve done graphic arts for like six years now. So I might as well do graphic design. I’ve always been interested in the new media aspect of it because our technology is constantly changing.”

When he graduates, he hopes to do work in web design or advertising, as he enjoys learning how to program.

Coming from Sanford, Maine, Traverso-Penn chose the University of Maine because of the low in-state cost of tuition and the campus.

“I love the campus. I like nature in general and this is a very open campus, so I get to go explore trails and do all that type of fun stuff.”

Lucky for him, the trails are the perfect place to walk dogs too. Since he lets them off the leash when they go on the trails, he only brings the dogs that he knows will listen to him.

“Next week I have the older labs with me and I’m going to take them out to the trails.”

China Garden — delicious as always
10 Things to Remember on Halloween