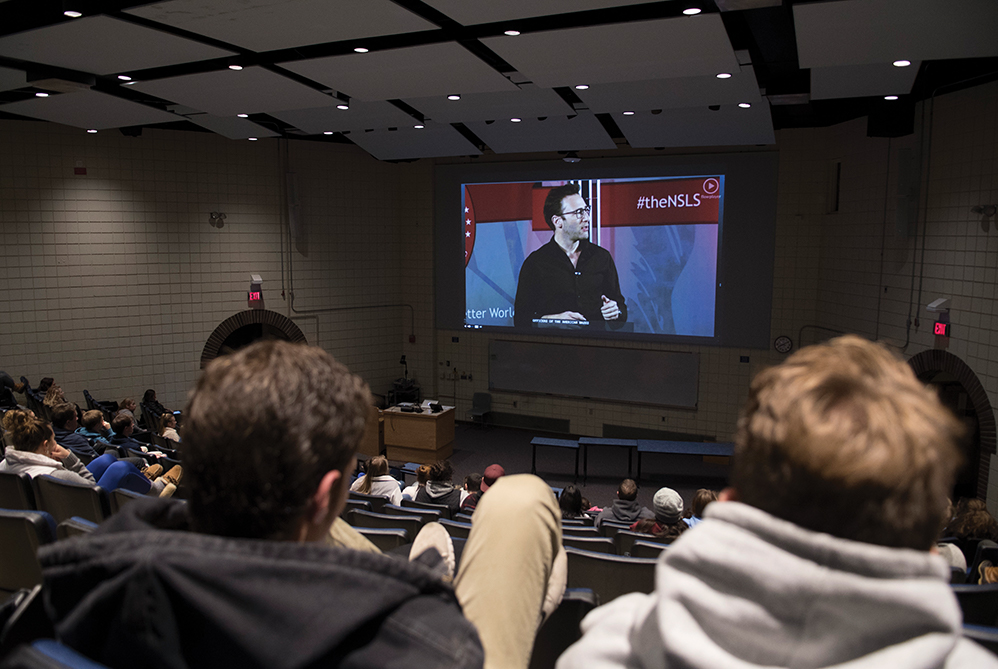 Simon Sinek, New York Times best-selling author, motivational speaker and marketing consultant, broadcasted a talk to the University of Maine on the evening of Wednesday, Nov. 8 in Neville Hall through the UMaine chapter of The National Society of Leadership and Success. Approximately 50 students were in attendance for the broadcast showing Sinek speaking about leadership, inspiration and organizational culture. The event was livestreamed from John Jay College in New York City.

According to the UMaine webpage for the event, “Sinek is fascinated by the leaders and companies that have the capacity to inspire, and has discovered remarkable patterns about how they think, act and communicate. He is best known for popularizing these ideas in his first Ted Talk, which is the third most watched talk of all time on TED.com. Sinek has had the honor of sharing his ideas at the United Nations, the United States Congress and with an array of leaders and organizations, including: Disney, JetBlue, MARS, SAP, Pfizer, NBC and with the senior leadership of the United States Air Force, Marine Corps, Army and Navy, as well as Special Forces agencies.”

The talk began with Sinek discussing the idea of “beating your competition” and why the theory doesn’t work. He elaborated by explaining that competition in the business world is out there to inspire and motivate you to be better — not for you to beat them or “win.” He touched on the Dow Index and how most of the companies on the spectrum now are new, asking,“Where are all the old companies? They fell out of the game.” He explained that this is because “you can win every battle and still lose the war.”

To avoid this, he touched on a checklist to success for a company — mentioning that order was important because you can have the last three components, but still be unsuccessful in the field. Items on the checklist include having a just cause, courageous leadership, a vulnerable team, a worthy adversary and an open playbook. He added that having a team that works well together is crucial. “If the team loves each other, they will take care of each other and take care of the company because they believe in it.”

Sinek also discussed the importance of making an impact on other people’s lives with your contributions to the world.

“If you choose to live life by finite rules, that means you wake up every single day to be number one, to beat your competition, to make more money and accumulate more power than anybody else and here’s what happens… the day you die, richer than anybody else, you’ve put all your competitors to shame, with more power than anyone you’ve ever known, you don’t win life. You just die. What do you want in your tombstone? Nobody wants the last balance in their bank on their tombstone. We want to be remembered for our contribution to the lives of other people. Devoted mother, loving father … that’s what it means to live an infinite life.”

Sinek added that to live an infinite life, it is important to have people follow your just cause or your contributions to the world so that they can say, “I am who I am because of you.”

Sinek ended his broadcast by answering questions from Twitter and the audience.