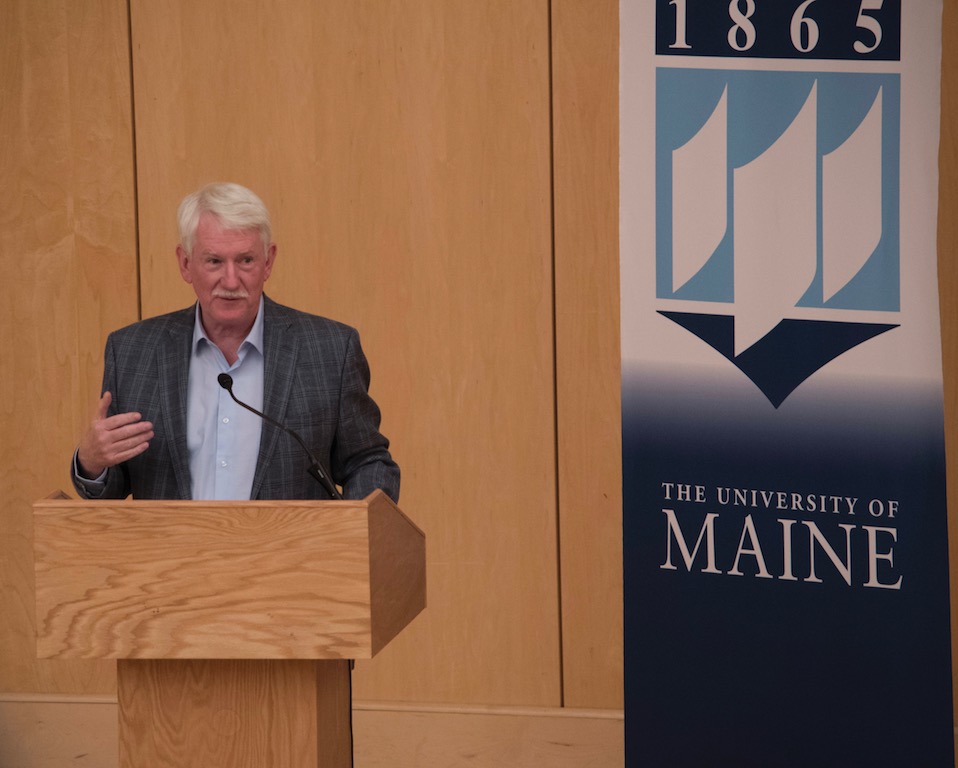 We live in a place called Maine, “where the coast melts into the sea, where mountains merge with the sky… a place where nature welcomes all to share its beauty and its space, to touch its heartbeat, to thrive, to breathe, to live, at one.” This excerpt from Lynn Plourde’s book “At One In a Place Called Maine” captures the true essence of the pine tree state.

On Thursday, Nov. 9, well-known Maine native Bill Green paid a visit to the University of Maine to remind us of how lucky we are to be living in Maine. This was the inaugural event of Framing Maine, a series that celebrates the “way life should be.” The purpose of Framing Maine is to bring to campus notable writers, artists, journalists and others who tell stories of Maine.

“It’s such a wonderful way to celebrate our state,” Provost Jeffrey Hecker said during the opening remarks for Bill Green’s conversation with Brian Naylor at Minsky Hall. Green graduated from the University of Maine in 1976. He put himself through school by working as a cameraman at WLBZ2 in Bangor. That job started his 45-year-long career in television, from anchoring weekend sports to ultimately launching the most-watched show in its time slot, “Bill Green’s Maine.”

“Bill, you’ve become a brand,” Naylor said as he introduced Green. “You tell stories with warmth, wit, charm and empathy.”

Naylor is a Washington Desk correspondent at the National Public Radio (NPR). Also a UMaine alumnus, Naylor has worked for NPR for over 30 years, covering a wide array of stories from Obama’s White House to the Olympics.

Prior to Green’s conversation with Naylor, the UMaine alumni spoke to a small group of students at a one-on-one informal meeting. Students studying parks and recreation, new media and business had the opportunity to ask Green and Naylor about their careers.

“My advice is to find a good mentor who you trust,” Green said. He and Naylor also shared what factors make up a good story in each of their professions. For Naylor, a good story includes an interviewee who can speak concisely and factually about the matters of their expertise. For Green, a good story might be something with emotion, something that hooks the audience.

“I am still trying to inform you, but I am more of a storyteller,” Green said. “As a storyteller, you gotta give the story a voice and you need to have a confidence that your story is good enough.”

“With social media, start building your brand right now, the more people you have at your thumb, the bigger impact you can make. You all are TV stations,” Green said. “I don’t know if my TV station will be there in 20 years. So be your own, be able to develop your own stories, it’s in your hands.”

At the 6.30 p.m. presentation Green showed some excerpts from his TV show, featuring a Maine lobsterman, a group of mountain skiers dressed as Santas and a team of sled racers at Hogback mountain. The audience of more than 100 people shared laughs as they watched the epitome of Maine on screen: homemade, simple and joyful in every sense.

The evening concluded with John Diamond, president of the UMaine Alumni Association, presenting Green with a Black Bear Award. The next installment of the Framing Maine series will be on April 5, 2018, featuring David Mallett, a Maine-born American folk singer and a UMaine graduate.