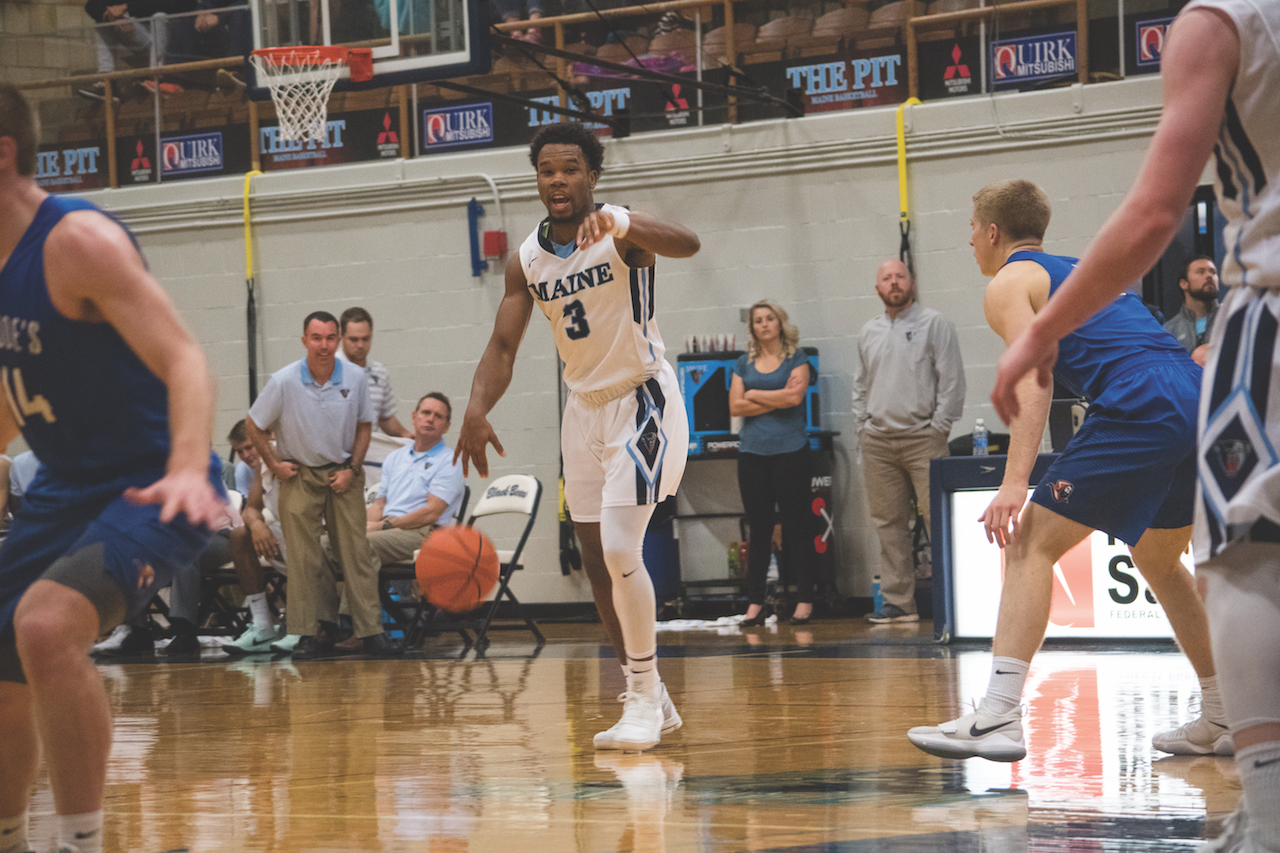 The Black Bears men’s basketball team returned to action this weekend in the Memorial Gym against in-state opponent St. Joseph’s College of Maine Monks. In the final preseason game of the year UMaine took care of business, winning 66-54. It was Maine’s second straight victory after an 84-63 win over Husson University last Saturday and the Black Bears finish the preseason 2-0. Sunday’s action saw Maine struggle to find a rhythm early, but once it was found they never looked back and physically dominated St. Joe’s, who shot the ball well in the first half, but proved to be no match down the stretch for the Black Bears.

The Black Bears were able to fight their way back into the lead before halftime thanks to second-year forward Andrew Fleming and third-year guard Vernon Lowndes Jr. in the first half as they combined for 19 of the Black Bears’ 35. Lowndes Jr. was 3-3 for the period, making both shots from behind the arc for 100 percent from three. Fleming bullied his way to 11 points and five boards shooting 5-7, making the most of his time in the paint finishing strong at the rim, not phased by Monk defenders. Maine entered halftime up by 2 points 35-33.

St. Joe’s came out firing scoring a quick three points, but Maine followed that up with a run of their own, led once again by Fleming in the first five minutes of the second half. Fleming was able to score and also pass the rock, finding fourth-year guard Ilker Er cutting to the basket for the first few of Maine’s points on the run. Maine found themselves in a rhythm extending the lead on third-year Trae Bryant’s three pointer to go up 49-38 lead.

The Black Bears opened things up with 12:32 left after first-year forward Miks Antoms put his big man moves to work in the post, finishing with a soft jump hook that only found the bottom of the net. Maine would force the turnover on defense and get out on the fast break where third-year guard Dusan Majstorovic finished the easy transition lay-up to extend the Maine lead 56-39. Maine wouldn’t look back as they dominated the second half with strong defense and tough rebounding in the post to help cap the preseason.

“We settled down in the second half, we became more of who we are offensively and defensively and we found away to win, and it wasn’t pretty,” Maine Head Coach Bob Walsh said.

“I like playing really well coached good programs like Husson and St. Joe’s. They’re going to expose you. They won’t let you do what you want to do. The preseason is over, and we’ll learn a lot about our guys and what we need to do to get better,” Walsh said.

Fleming, who had an impressive preseason putting up a line of 13 points, 4-5 FG, 4-4 FT, five boards and four assists in the win over Husson, continued his success against St. Joe’s scoring 17 points on 7-12 shooting. He added 11 rebounds and five assists on his stat line.

“He’s been rock solid, we’re still trying to get him to the point where he’s comfortable being our go to guy and you know he’s still just a sophomore, he’s got a really really high ceiling,” Walsh said of Fleming.

Lowndes Jr. also had an impressive final preseason game, adding 12 points on 5-6 shooting 2-3 from beyond the arc and five boards on the day.

Maine will travel to ACC-foe Boston College on Friday, Nov. 10 to open the regular season. The Black Bears face the Eagles in Chestnut Hill, Mass. St. Joe’s will travel Nov. 15 against Maine Maritime starting at 7:30 p.m.