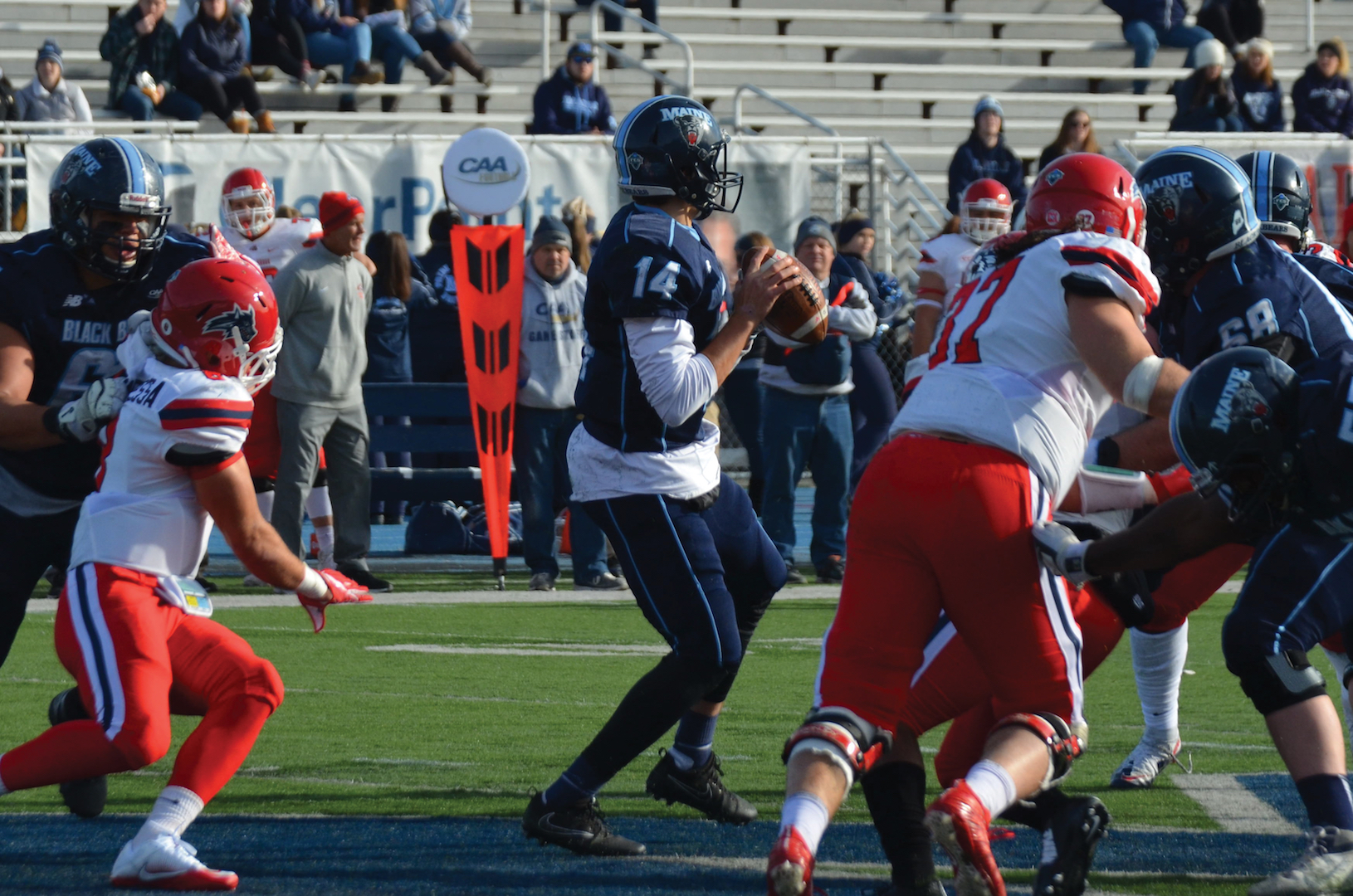 The University of Maine football team (4-6, 3-5) closed out their season by hosting the Stony Brook University Seawolves (9-2, 7-1) on Saturday, Nov. 18 for Senior Day. The Black Bears honored 24 seniors for their hard work and dedication over the past four years. The Black Bears lost a close one, 20-19. The Black Bears and Seawolves have met seven times prior to this game, with Maine holding a 4-2 advantage. Maine had won two games in a row versus the Seawolves prior to Saturday’s action.

Starting at quarterback for the Black Bears was redshirt first-year Chris Ferguson. Ferguson has played in nine games and has passed 1,808 yards thus far in his career. Last season, Ferguson was on the CAA All-Academic Team and was a Maine Scholar-Athlete Rising Star

Starting at quarterback for the Seawolves was third-year Joe Carbone. Last season, Carbone played in and started nine games at quarterback. He finished the season with 1,017 yards passing and three touchdowns.

In the first quarter, Ferguson made a 40-yard pass to second-year Ernest Edwards for the first touchdown of the game, making the score 6-0 with 7:03 left in the first. Maine then went for the two-point conversion but it was no good.

Ferguson then made a 25-yard gain for first in goal for the Black Bears, which then led to a Black Bear touchdown by second-year running back Josh Mack from three yards out, increasing the score to 12-0. The Black Bears then went for the two-point conversion but it was incomplete.

Late in the second quarter, Stony Brook got on the board when third-year running back Donald Liotine made a rush for 10 yards, resulting a touchdown. Third-year Nick Courtney then kicked for the extra point conversion, increasing the score to 12-7 in favour of the Black Bears.

Maine then responded with 59-yard pass from Ferguson to fourth-year receiver Jared Osumah. Third-year Brandon Briggs then completed the extra point to increase Maine’s lead to 12 with 2:25 remaining the second quarter.

After 30 minutes of play, the score was 19-7. The Black Bears continued to lead the Seawolves in total yards, rush yards and pass yards. Ferguson had a total of 202 yards with two touchdown passes. Seawolves’ Carbone had a total of 18 yards for a rating of 39.4.

“We played hard but we just have to finish. They did some things but it was nothing special that we haven’t seen all year. We just have to execute,” fourth-year offensive lineman Jamil Demby said.

“I thought Maine played terrific defensively the entire game, they had us off balance. We ended up making plays offensively when the day was over. I thought offensively they have two big plays on us but other than that, our defense was terrific. We kept them pretty bottled up most of the game,” Stony Brook’s Head Coach Chuck Priore, stated.

In the fourth quarter, Stony Brook made a 65-yard gain when Carbone completed a pass to graduate student Harrison Miller. Carbone then found third-year Donavin Washington for a touchdown. Courtney then went for the extra point conversion and it was good. The Seawolves decreased their deficit to five with 10:46 remaining in the game.

With 31 seconds on the clock, Carbone found Jackson for a 35-yard touchdown to give the Seawolves the win, 20-19.

“It was crucial first down and Carbone found me in the end zone. You just have to trust the process and trust your teammates. My teammates trust me and my coaches’ trust me. I just jumped up and caught the ball,” Jackson expressed.

“It was just another extremely disappointing loss for us. We played well for a lot of the game and it got away from us at the end. We didn’t make enough plays in the fourth quarter and it was a tough way to lose it,” Maine Head Coach Joe Harasymiak said.