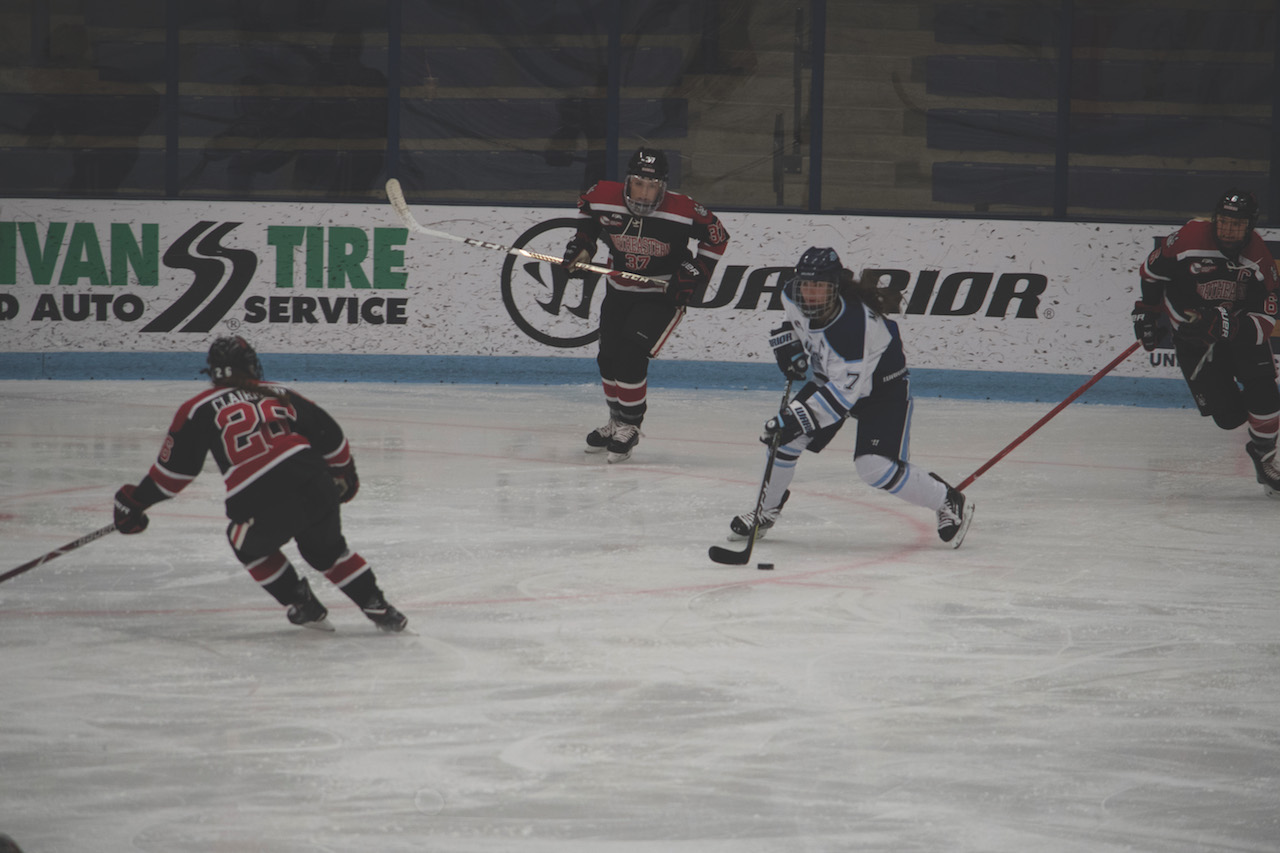 The UMaine Women’s Hockey team returned home after a two-week road trip to face off against the Northeastern Huskies. The Black Bears (8-5-1, 4-3-1) defeated Northeastern (5-6-1) 4-2 after a second-period explosion that saw five goals scored in total. Fourth-year forward Catherine Tufts scored two goals, one to open up the scoring in the second period and the other to secure the Maine victory in their return to Orono.

The Black Bears returned to the friendly confines of Alfond Arena Tuesday, Nov. 7, coming off a 7-2 win over Dartmouth University that saw second-year forward Tereza Vanisova tally three assists and one goal. The win snapped a three-game skid, as Maine suffered losses at the University of New Hampshire, Boston College and Dartmouth University before the win Sunday over Big Green. Tuesday night the Black Bears were happy to be home against a conference foe they had success against last season. Maine was victorious in two of the three contests last season.

Northeastern showed signs of rust in the first period after coming off a week’s worth of rest. The Black Bears, however, carried over their momentum from their Nov. 5 win, showing no signs of fatigue early. Vanisova led the way, taking a hard shot at 16:30 of the first after taking on the Northeastern defense. The shot was turned away by third-year goaltender Brittany Bugalski, who finished the first with 11 saves. Northeastern showed some fight, but Black Bear second-year goaltender Carly Jackson held her own between the pipes, making a couple key saves and finishing the period with eight saves to keep the game 0-0.

The Black Bears were able to draw an interference penalty on Northeastern with under two minutes left in the first period and started the second on the power play, but were unable to convert on the man-up opportunity.

Just seconds later the Black Bears found themselves back on the attack and after a rebound was kicked out by Huskies goaltender Bugalski. It landed on the stick of Tufts, who buried her third goal of the season to give Maine a 1-0 lead 32 seconds into the second period.

Just past six minutes into the second and not long after Maine gave themselves the lead, first-year defender Lauren MacInnis knotted things up after a hard shot from the point  found its way through the crowd and into the net. Maine wouldn’t be denied and continued its strong second period attack when first-year forward Michelle Weis found herself streaking down the middle of the ice. Maine was short handed when fourth-year forward Stacey Brook found Weis who finished fantastically, ringing the post for her second goal on the season and giving Maine the lead at 10:25.

Minutes later Vanisova recorded another assist when she found captain and third-year defender Alyson Matteau for her third goal on the season that extended Maine’s lead at 12:42 of the second.

The Huskies wouldn’t roll over, eventually finding a rhythm and holding possession in the Maine end that led to a goal from first-year forward Veronika Pettey, cutting the Maine lead to 3-2. The assist came from fourth-year right winger McKenna Brand. The Black Bears finished the period on their heels, forcing Jackson to play bigger than her 5 feet 5 inches between the pipes and she did just that, making timely saves to keep the Black Bears ahead going into the third period.

Northeastern battled hard, but Maine proved to be too much with a second goal from Tufts 9:19 into the third. Vanisova and first-year defender Anna Zikova each tallied assists; Vanisova had two in the victory.

Northeastern played hard throughout; shots finished 24-22 in favor of Maine, but the Black Bears made the best of a power play and capitalized short handed to edge the Huskies.

The Black Bears are back in action Friday, Nov. 10 against No. 9 Providence College where they will look to win their third straight game.

With three power play goals, the Friars and Black Bears end the night in a tie

On Friday, Nov. 10, the No. 9 Providence Friars (6-3-3, 3-1-1) paid a visit to the University of Maine Black Bears at the Alfond Arena. Despite the five minutes of overtime, the contest ended in a 2-2 tie, with neither team able to score that third goal to push ahead. Both teams notched their first tie in conference play.

Jackson was back in net for the Black Bears after picking up the win on Tuesday, Nov. 7, collecting 20 saves. For the Friars, third-year goaltender Madison Myers got the nod between the pipes.

Both teams netted their two goals in the same period, one in the first and one in the third, but the lack of scoring wasn’t due to lack of effort.

“I think they are just really aggressive and they will put two people on the puck and I think it was hard to play our game and make the passes that we wanted to throughout the entire game,” Maine Head Coach Richard Reichenbach said.

The first goal of the game came 14 minutes into the contest when Maine was on the power play. Weis found the back of the net off a pass from Stacey and Vanisova.

“I think my line is working really good right now and I’m very happy to be in my line and I think that’s why it is going so good for me right now,” Weis said.

Providence did not let that goal end the first period. With one minute remaining, first-year right wing Maureen Murphy netted her fourth goal of the season off a pass from third-year center Cassidy MacPherson to second-year defender Rachel Rockwell to Murphy. Murphy was able to hit the frame and get the puck past Jackson.

“I just have to credit my team for back-checking and being able to get the puck to me. And then I just skated up the ice but I couldn’t have done it without them,” Murphy said of her goal.

The second period saw no scoring action, but it wasn’t for lack of trying. Providence logged 17 shots on goal, while Maine logged four. During the second period, there were two instances where the clock was not started with play and the Black Bears were threatened with a penalty if it happened again.

Seven minutes and 42 seconds into the third period Providence found the back of the net once again. Providence was on the power play and Murphy just barely got the puck into the goal. Assisting with this goal was fourth-year center Brooke Boquist and second-year defender Avery Fransoo. This was Murphy’s sixth goal of her collegiate career.

Maine quickly retaliated with a goal of their own when Providence got a penalty just a few minutes later. Weis scored again bringing the puck around Myers off of an assist from Vanisova and Alyson Matteau. This game gave Weis four games on her freshman campaign.

“She is a very consistent player and she is very smart defensively and I think she views herself as a playmaker,” Reichenbach said of Weis.

The game saw no more scoring after this goal. In overtime Providence received a penalty for tripping that saw some near goals from Maine, but neither team was able to successfully find the back of the net.

Jackson logged 36 saves on the night while Myers logged 19. Providence accumulated seven penalties during play, while Maine had three.

The Black Bears finished their three-game homestand against a different pack of Huskies, as they took on the University of Connecticut (4-4-3, 0-3-2) Sunday afternoon from Alfond Arena.

As was the case in the previous two games, Jackson was back between the pipes for the Black Bears. She is coming off a 36-save performance Friday against Providence College.

For UConn, fourth-year Annie Belanger got the nod in net. Belanger recorded 43 saves in the Huskies’ 2-2 draw against Boston University on Friday, Nov. 10.

The Black Bears got things started on offense, when Tufts took a pass from second-year forward Lydia Murray and beat a sprawling Belanger for her third goal of the homestand to put Maine up 1-0 with 12:49 left in the first period. The goal was the fourth of the season for Tufts.

UConn dominated the shot count in the first period, but the Black Bears stood tall defensively and made the necessary pushes into the Huskies’ defensive zone. Bad passing put a damper on otherwise golden scoring opportunities.

Maine would strike again 5:03 into the second period when Matteau found second-year forward Vendula Pribylova, who would backhand a wrist shot over Belanger’s glove shoulder to go up 2-0.

A minute later, UConn would get on the board when first-year forward Emily Snodgrass sniped one past Jackson, cutting the Black Bear lead to 2-1 with 13:46 left in the period.

The Huskies struck again as first-year forward Savannah Bouzide was fed by fourth-year forward Justine Fredette off a steal. With a scrum in front of the net, Bouzide backhanded it past Jackson to knot the game at 2-2 with 10:29 to go in the second.

Maine retook the lead 5:20 into the third period when Vanisova weaved through traffic and lifted one past Belanger for her fifth goal of the season.

Maine was given a gift at the 6:22 point when fourth-year forward Theresa Knutson got called for body checking, then third-year forward Rebecca Lindblad was called for tripping. The Huskies would kill the 5-on-3.

UConn went on the power play at the 11:31 mark after Zikova was called for holding, and Snodgrass immediately made the Black Bears pay, putting one past Jackson to tie the game at 3-3.

The Huskies almost went right back on the power when Weis got called for tripping with 6:25 to go in regulation, but the Black Bears did what they needed to do to kill off the penalty.

First-year defender Carley Olivier went to the box for UConn in the final two minutes of regulation, giving the Black Bears arguably their best chance to put it away. Overtime was necessary as the Huskies killed off the penalty.

Not that it mattered, because with 4:25 left in overtime Weis nailed the game winner, slipping it right past Belanger.

Maine had lost three straight prior to their current run, but Tufts knew that getting at each other’s throats was not the answer.

“The most important thing after the BC game was sticking together and sticking to the game plan. We just kept playing our game and moving forward,” Tufts said.

The Black Bears will be back in action on Saturday, Nov. 18 and Sunday, Nov. 19, as they take on Northeastern in Boston. Puck drop for both games is slated for 2 p.m. UConn will have a home and home set up against No. 2 Boston College for Nov. 17 and 18.