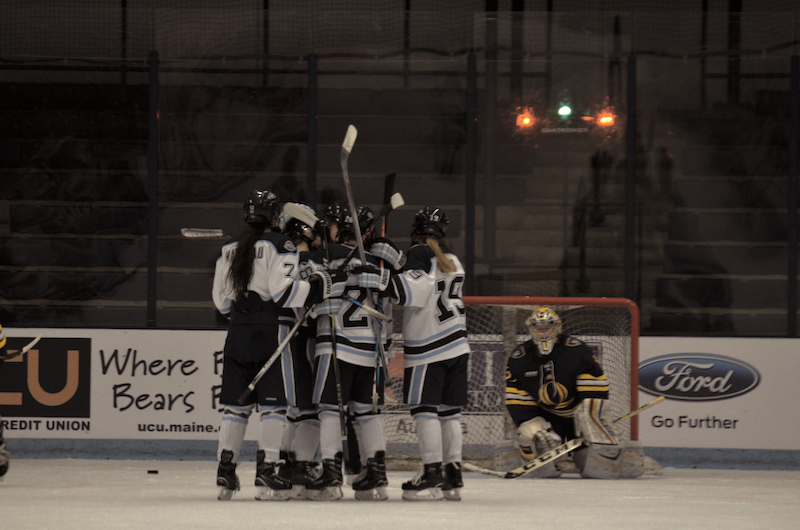 Women's hockey gets shut out, following it with a shut out of their own. File Photo

Northeastern started scoring in the first period when Maine’s second-year forward Tereza Vanisova was given a penalty for interference 12 minutes and 50 seconds into the first period. This gave first-year defender Skylar Fontaine the opportunity to score a power play goal, 14 minutes into the period. She was assisted by second-year defender Codie Cross. This was her second power play goal of the season and her third goal in her freshman campaign. Cross notched her fifth assist on the season.

Despite Maine’s inability to net a goal, the Black Bears and the Huskies both had 10 shots on net in the first period. In the second period, the Black Bear logged 12 shots on goal, while Northeastern only logged nine.

Just five minutes and 54 seconds into the third period, the Huskies found the back of the net once again, this time directly following a penalty kill. Fourth-year forward McKenna Brand was able to get the puck from third-year defender Allyson Matteau and was able to make it down the ice and made a wrist shot into the net, bringing the score to 2-0 for the Huskies. This was Brand’s seventh goal on the season. She has netted three power play goals on the season and has 10 points on the season.

Northeastern was able to net another goal with just 25 minutes remaining in the game. Redshirt third-year forward Taytum Clairmont was able to net an empty-net goal, shooting from center ice after the Black Bears pulled second-year goaltender Carly Jackson from the net. Third-year defender Maddie Hartman had the assist on the goal. This was Clairmont’s fourth goal of the season and her first empty net goal.

Despite the Huskies being the only one to score, the Black Bears led the period in shots on goal with 17 compared to the Huskies’ seven shots.

After being shut out by the Huskies the night before, the Black Bears turned the tables to earn a shutout of their own Sunday afternoon, winning 2-0.

Fourth-year forward Brooke Stacey scored both of the goals of the game: one in the first period and the other in the second.

Six minutes and five seconds into the game, first-year forward Michelle Weis got the puck from second-year defender Brittany Colton, taking the shot, which was blocked by Frankel. The rebound went into a cluster of players in front of the net, from where Stacey was able to get the puck into the net, giving the Black Bears a 1-0 lead.

The first period saw 10 shots on net from the Black Bears, while Northeastern logged six. The next period was when the Huskies really hammered Jackson with shots, logging 16 shots on net compared to the Black Bears’ nine. Lucky for the Black Bears Jackson stood strong, not letting any shots in, while Stacey was able to sneak one past Frankel.

The play started with first-year defender Maggie Blair passed the puck from behind the net to Vanisova who passed it to Stacey. Stacey was able to net it off the post with a one-timer. These two goals bring Stacey to eight goals on the season with this being the third multi-goal game.

Although the third period saw no scoring, Maine made nine shots on goal, while Northeastern had six, bringing both teams to 28 shots on the day.

Jackson picked up the win, getting her first shut-out of the season and the second of her career, her first being against the University of Connecticut last year. This was also her third highest number of shots saved this season.

Although Frankel took the loss, she still managed to save 26 shots, which is also her third highest on the season.

Northeastern will go on to to play No. 1 Wisconsin on Friday, Nov. 24 in Washington D.C. Puck-drop is scheduled for 4 p.m. The Black Bears will also play on Friday, Nov. 24 going to Schenectady, N.Y. to play Union College at 6 p.m.