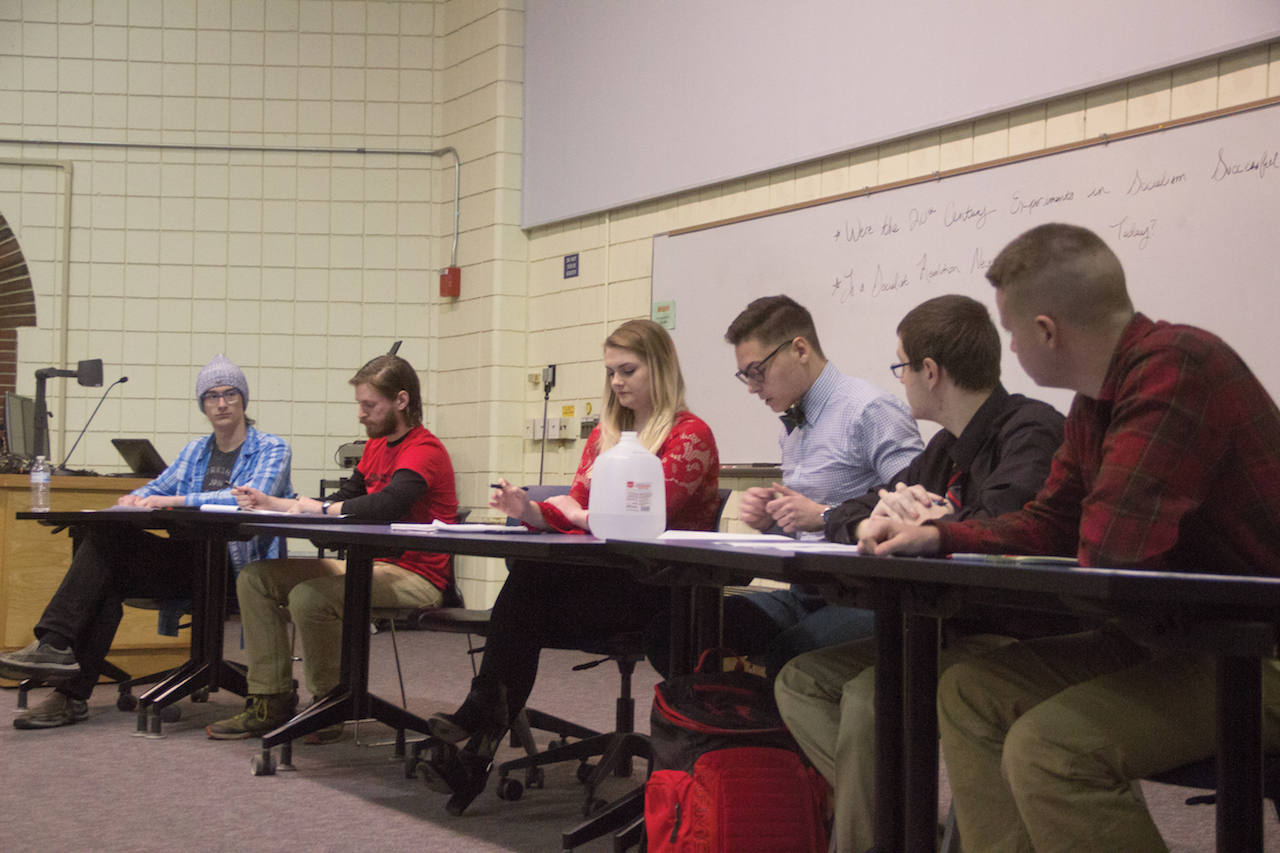 The debate focused on two questions: “Were the 20th century experiments in Socialism successful?” and “Is a Socialist revolution necessary or desirable today?” The format allowed each team a five minute openings, three three-minute rebuttals and five minute closers. Both teams also took questions at the end.

The U.S. government has admitted to investing money to undermine Allende’s campaigns, but it is uncertain whether they supported the coup that overthrew him. Dendinger said similar practices of interference in South America were common of the U.S. during the Cold War era.

Dendinger admitted that the estimates of people who died due to communism since 1917 are near 94 million, but that many have died from capitalism as well.

Dendinger also claimed that socialism in Cuba has helped further gender and racial equality. For these reasons, Dendinger said socialism has been both successful and unsuccessful, and today a socialist revolution is necessary.

“Socialism is the suicide of nations, history has shown,” Miller said.

Miller also claimed that the proletariat, who socialism claims to be a champion for, voted for President Donald Trump in the 2016 election.

In the Socialists’ first rebuttal Joe Perry, a physics student, responded to the notion of the Nazi party as a Socialist party with scepticism. Perry claimed that dictatorships, like that of the Nazi party, adopt the title “socialism” to persuade workers.

Dendinger used a portion of the rebuttal to claim that the Nazi party was bankrolled by U.S. business. Dendinger also stated that he believes wealthy people voted for Trump, but the proletariat supported Senator Bernie Sanders for President.

During the Republicans’ rebuttal Miller likened the politics of Sanders to those of Hitler, claiming that Hitler supported free education and healthcare.

“I think a Bernie Sanders supporter would get along with Adolf Hitler,” Miller said. “He was a big government guy.”

Sean Foley, a political science student for the College Republicans, focused on the Socialist team’s opener. Foley said Allende was a rare example of a democratically-elected socialist.

Foley and Miller called socialist literature outdated and unnecessary in today’s society and claimed that reading it has not led to successful socialism.

“Whenever anyone tells you not to read, that’s a red flag,” Dendinger responded.

Dendinger also addressed the “big government” parallel, which Miller drew between the Nazi party and socialism. Dendinger claimed that in real Socialism the workers have control, not the government.

The third rebuttals for both teams became partly repetitive, with both teams reinforcing points they made earlier in the debate. Miller and Connor Missett, a mechanical engineering student, described socialism as too rigid, relying on the same age-old texts, with less adaptability than capitalism. Dendinger and Perry cited Cuba’s high literacy and low homelessness and compared it to the U.S., where houses sit empty while people are homeless.

Foley focused on individual rights. He believes that Capitalism gives people control over which occupation they work, and allows social mobility.

“It [socialism] imposes itself in an imperialist way, which they try to push on us,” Foley said.

Foley went on to close for the group, stating that socialism has failed and why he believes so. Foley claimed that a class system and beneficial conditions for elites were present in socialist experiments of the 20th century.

Perry began the Socialists’ closer by listing off the republican team’s statements which he found detestable, including sympathizing with the ruling class during the Spanish Revolution, comparing Sanders to Hitler, and calling Trump a “great philosopher.”

After the debate, the crowd was invited to question both teams. Questions ranged from inquiries about the debater’s moral standings on wage inequality, to personal freedom concerns, to freedom of speech.

One spectator raised questions about Miller’s Claims that 20 million people were killed in Lenin’s “Gulag” or a system of forced labor camps. The spectator stated that only 14 million people lived in the Ukraine during this time, and that only one million were sentenced to death, claiming that he was citing “Official Sources.”

“I had 20 million in my head before I started researching for the debate,” Miller said, explaining that 20 million was a figure he had heard his whole life.

Miller said he would check the man’s source and reject the 20 million figure as anti-socialist propaganda if the source seemed official.

A spectator asked the communist team how they would keep freedom of speech alive, when their favorite example of socialism, Cuba, restricts public debates. Dendinger claimed that it was “almost by necessity” that Cuba limited free speech, but overall supported free speech.

“If the approach is bottom up, free speech is part of it from the beginning,” Dendinger said.