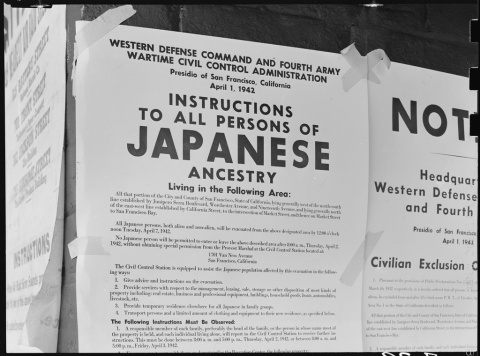 San Francisco, California. Exclusion Order posted at First and Front Streets directing removal of persons of Japanese ancestry from the first San Francisco section to be affected by the evacuation. Courtesy of the National Archives and Records Administration.

On Monday, Nov. 13, University of Maine welcomed Tom Ikeda for his talk titled “World War II Incarceration of Japanese Americans and Why It Matters Today.”

Shortly after the Dec. 7, 1941 Imperial Japan’s attack on Pearl Harbor, the Japanese Americans living on the West Coast were subjected to amplified hostility and distrust from their fellow Americans which lead to the targeting and imprisonment of Japanese Americans.

“All of a sudden my Japaneseness became very aware to me. And then that I was no longer, I no longer felt I’m an equal American,” Aki Kurose said about her reaction to the aftermath of the bombing of Pearl Harbor in a 1997 interview for Densho.

Tom Ikeda is the founding Executive Director of Densho, a nonprofit organization founded in 1996. In Japanese “densho” means “to pass on to the next generation,” and that is Densho’s goal — to preserve and share the stories of Japanese Americans who were incarcerated during World War II. The digital archives contain hundreds of photographs, documents, newspaper clippings and oral interviews that give first-person accounts of the incarceration.

This was Ikeda’s first time in Maine. He is a third generation Japanese American who was born and raised in Seattle. His parents and grandparents were incarcerated during World War II at a camp in Minidoka, Idaho.

“Part of doing this is the connection to the community,doing something you know really matters in terms of people’s hearts and spirits,” Ikeda said. “Not only am I honoring my elders but we are also standing up for the vulnerable communities today.”

Prior to working at Densho, Ikeda was a General Manager at Microsoft Corporation in the Multimedia Publishing Group. He also worked as a research engineer developing artificial kidneys and as a financial analyst.

“My training as an engineer and passion for oral history came together,” Ikeda said about his choice to start Densho. “It just seems so obvious to me that you would want to do this, stories are such a powerful way to understand and learn, and if you’re curious it is so much more interesting to learn this way.”

Seventy-five years ago, on Feb. 19, 1942, President Franklin D. Roosevelt signed the Executive Order 9066 which led to the imprisonment of 120,000 people of Japanese descent, most of whom were United States citizens who had citizenship rights and equal protection of the laws under the due process clause of the 14th Amendments. The decision came in the midst of war hysteria and the shift in the public opinion against Japanese Americans. Civilians and military officials voiced deep concerns about the loyalty of Japanese Americans to the Imperial Japan, accusing those who never stepped a foot in Japan of espionage. Early in 1941, Roosevelt commissioned Curtis Munson to conduct an investigation on Japanese Americans living on the West Coast and in Hawaii. After working with the FBI, the Office of Naval Intelligence, and interviewing Japanese Americans and those familiar with them, Munson submitted a report, just two months prior to the attack on Pearl Harbor, that stated the “Japanese problem” to be nonexistent. His final report concluded that there is a “remarkable, even extraordinary degree of loyalty among this generally suspect ethnic group.”

Nevertheless, the Executive Order 9066 was signed. The Census Bureau assisted the incarceration by providing confidential data on the neighborhoods with concentrated numbers of Japanese Americans, most of whom lived on the Pacific coast. People had a week to 10 days to pack basic necessities and remove themselves. The government did not, however, carry on mass scale internments of Americans of German and Italian descent, the countries that U.S. was also at war with.

“We were American. How come Tony, they were Italian, how come they weren’t evacuated?” Frank Yamasaki said in a 1997 video interview for Densho. Yamasaki, Ikeda’s late father-in-law was among those few who resisted the military draft that would “prove” their loyalty to America. “How come the German friends I had, they weren’t evacuated? And they had far more active political organization in America than the Japanese had. The Japanese, I don’t recall ever sounding, being subversive-minded. And I think, later on, it proved there was absolutely no subversive act.”

In 1937, 150,000 out of 400,000 people in Hawaii were of Japanese ancestry. Hawaii did not carry out internments because it was deemed damaging to the economy, since Japanese Americans heavily influenced the labor force of the militarily strategic island. Paradoxically, Japanese Americans posed a threat to the country, yet they were encouraged to enlist. There were many young Japanese American men who believed that by serving the U.S. Army, they could alleviate the hostility and distrust their government and fellow Americans had toward them. The 442nd Regimental Combat Team, an infantry regiment of the U.S. Army, was the most decorated unit for its size and length of service in the history of American warfare. It was a fighting unit composed almost entirely of American soldiers of Japanese ancestry who fought in World War II. With a motto “Go for Broke,” the soldiers were defending the ideals of democracy, fighting for a country that held their families in internment camps. Ikeda’s uncle Francis “Bako” Kinoshita was part of the 442nd infantry regiment and was killed in action. His parents attended his memorial service and received the U.S. flag inside the barbed wires of the Minidoka internment camp.

“For me, so much of what’s going on today, with a population that did nothing wrong, sounds like and looks like what happened to Japanese Americans 75 years ago,” Ikeda said, referencing President Trump’s executive Jan. 27, 2017 Executive Order barring immigrants from seven Muslim-majority countries from entering the U.S. “To quote Mark Twain, “History doesn’t repeat itself, but it often rhymes.”

Ikeda weaved stories of people in this insightful lecture to draw parallels between what happened and what could happen to ethnic minorities in the U.S. The lecture concluded with Ikeda taking some questions and comments from the audience.

“I couldn’t learn about this from a textbook in Japan,” Sayoko Mori, Japanese instructor in the UMaine Critical Languages program said.

“And you couldn’t learn it from an American textbook,” Ikeda replied.

Swimming and Diving competes at Anderson Invitational
Tanesha Sutton: On and off the court