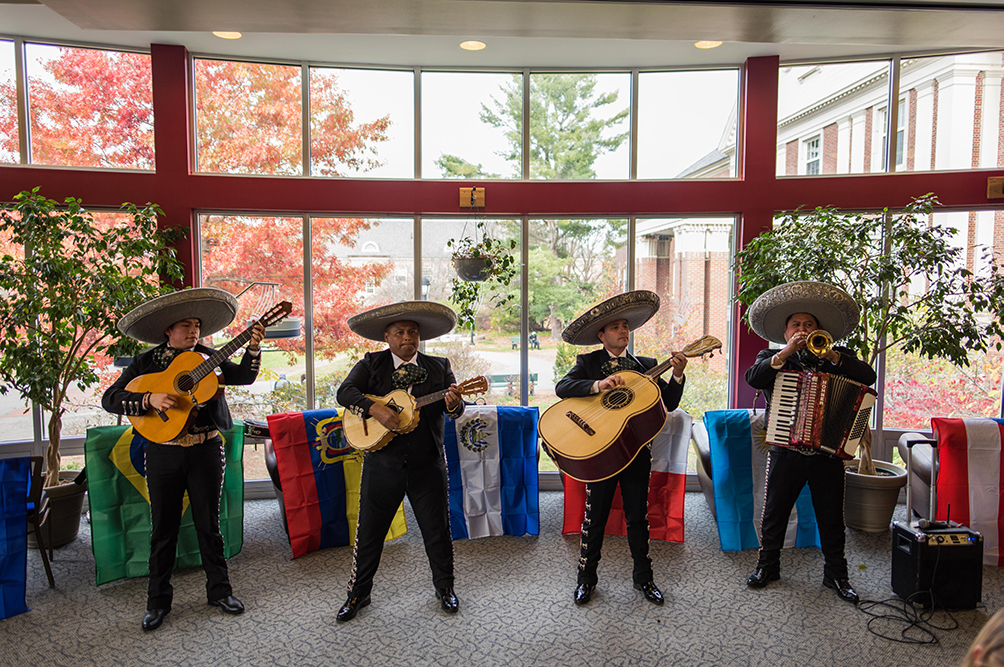 On Wednesday, Nov. 1, the Latin American Student Organization (LASO) hosted a Dia De Los Muertos celebration at the Memorial Union. Decorated with multicolored balloons, streamers and flags, the North Pod was transformed into a Day of the Dead festival and feast that brought Latin American culture to campus.

Students were invited to sit together and enjoy Mexican cuisine while listening to Latin pop music. At 12:30 p.m., the Union was filled with the sound of a four-piece mariachi band. Members of LASO helped set up and direct the serving of catered Las Palapas food during the event, as well as facilitating discussions of Hispanic culture with those in attendance. The event was hosted in hopes of raising awareness of Hispanic heritage and the Hispanic community on campus.

Third-year psychology student Isabel Paredes is the vice president of LASO. She joined the group at the end of her first-year at UMaine with the hopes of reconnecting with her culture.

“Our idea behind this event is to help make our campus more culturally aware,” Paredes said. “I come from a place with a large Hispanic population. While at home I had many friends who spoke Spanish, when I first got here I had to call my parents to speak Spanish. Being a part of this has made me a more open person. Through this organization, I get invited to other groups programs and get to learn about other cultures.”

Dia de los Muertos is celebration observed across Latin America dedicated to cherishing those who have died by keeping their memory alive. Combining Aztec ritual with Catholicism, it is believed that on the first of the month the spirits of deceased children are reunited with their families for 24 hours. Then on the following day, the spirits of the adults return and enjoy the festivities that are prepared for them by their families and friends.

In honor of their loved ones, families create altars decorated in brightly colored flowers, candles and the favorite food of those who have passed. Later in the afternoon, the celebration moves to the cemetery. Families go on picnics, play games, listen to music and frequently end up spending the night near their family member’s grave.

Despite its ancient roots, many Americans associate the holiday with nothing more than sugar candy skulls and fluorescent colors. While these spiritual and cultural elements have recently found their way into American pop culture, the effects of its popularization surpass merely evoking questions of cultural appropriation. The recent popularity of the holiday has shifted its perception in the hispanic community. It quickly transformed from a working class celebration, to the middle class’s remembrance of their roots.

LASO’s attempt to share their heritage overtook the North Pod, as students from all cultural backgrounds boisterously celebrated Hispanic culture. If you are interested in joining The Latin American Student Organization, their weekly meetings are held in the Multicultural Lounge on Tuesdays at 7 p.m.