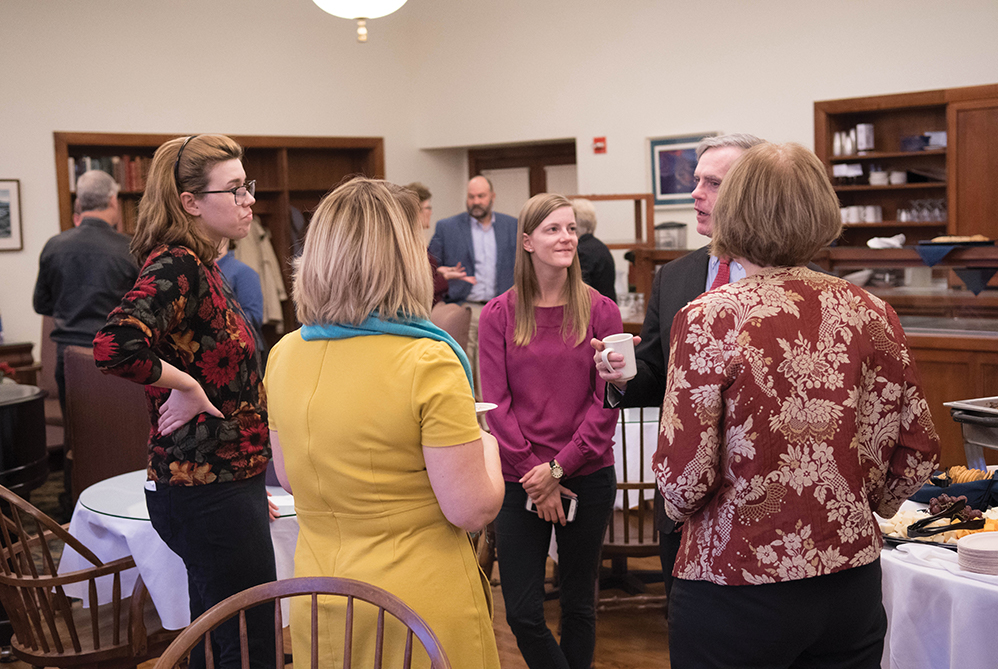 A reception for Michael Thibodeau, Maine Senate President as a Distinguished Maine Policy Fellow at UMaine on Thursday. Photo by Evan Loignon, Staff

On Thursday, Nov. 2, the University of Maine hosted Maine Senate President Michael Thibodeau as the 2017 Distinguished Maine Policy Fellow. The program is sponsored by the Margaret Chase Smith Policy Center, a research and public service center at UMaine.

Distinguished Maine Policy Fellows are, according to the Margaret Chase Smith Center’s website, “individuals with past or current careers as policy makers in Maine — people of distinguished status and extensive experience.” Fellows are brought to campus and spend a day meeting with undergraduate and graduate students as well as faculty members, giving lectures and discussing research and public policy.

Sen. Thibodeau began his day on campus with President Susan Hunter, who hopes every year that the chosen Distinguished Maine Policy Fellow will leave a positive impact on the school.

“People on campus get a chance to talk about what they do to someone with fresh eyes,” Hunter said.

The aspect of the university that piqued Thibodeau’s interest the most was the engineering department, specifically its recent work on biodegradable cups.

“The University is very proud of its program,” Thibodeau said.

UMaine has plans in the works to expand the engineering department, but funding is partially up in the air. The Senate is currently debating how much state funding the expansion should receive.

At his guest lecture, Thibodeau spoke with political science students about the function of the Maine state government. He served for four years in the Maine House of Representatives, beginning in 2006, and is now nearing eight years in the Senate after being elected President in 2014.

A reception for the day was held in the University Club in Fogler Library Thursday evening, where Thibodeau, Dill, Amy Blackstone from the Sociology department and the Margaret Chase Smith Center and President Hunter attended along with others.

“He’s very willing to talk and listen to both sides.” Dill said.

Thibodeau and Dill discussed the importance of working across the aisle, as Thibodeau is a Republican and Dill is a Democrat.

“It isn’t about whether or not we agree on the issue. Folks have strong opinions but you have to try to understand,” Dill said.

“Each and every member of the Senate loves our state,” Thibodeau said. “And sometimes it’s the debate that brings out the best in us.”

Also present at the reception was Mary Cathcart, who has been with the Margaret Chase Smith Center since 2004 and started the Distinguished Maine Policy Fellows program in 2006.

“Every time we have visitors to campus, I learn something new about what students are doing on campus, and what they’re doing benefits us and benefits Maine,” Cathcart said, before presenting Thibodeau with a plaque and a Margaret Chase Smith bobblehead.

“I am honored and privileged to see all the hard work that’s going on at Maine’s premiere University,” Thibodeau concluded, commending UMaine for its dedication to the next generation of Mainers and commitment to keeping young people in the state. “We need people to stay here and be Mainers for the rest of their lives.”