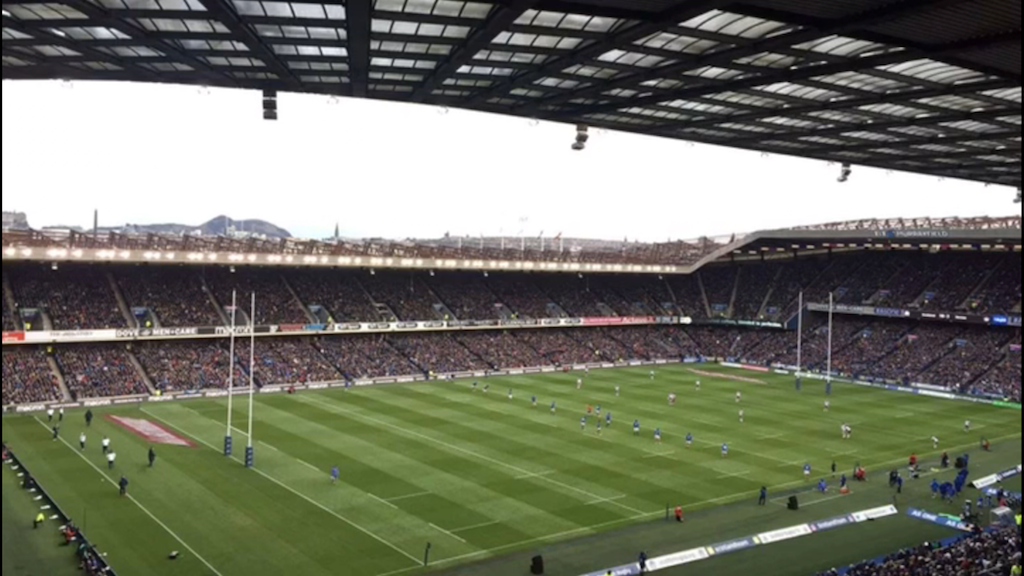 Last weekend I took a wee jaunt down to Edinburgh with my friends Matt and Ewan to see a rugby match in Ewan’s home city of Edinburgh. The game, Scotland vs. Samoa, was played at Murrayfield Stadium in front of a sold out crowd of over 67,000 people, with Scotland narrowly grabbing the victory (44-38).

The lads dubbed the drive from Aberdeen to Edinburgh “pretty boring” and “a bit shite” so my expectations were low. But as soon as we left the city, the fire of the country boy within me reignited. The view out the window was that of endless green grass, occasional grazing horses and the sun rising over the River Dee. After a couple months in the city, it was great to get a taste of the countryside.

The crowd at rugby matches is much tamer than the crowd at football (soccer) matches, an observation that was confirmed by my Scottish counterparts. However, the factors would seem to lend themselves to the opposite. They sell beer at rugby matches whereas they don’t at football matches, and in rugby, fans of both teams are lumped together whereas there are separate sections for home fans and away fans at football matches. The combination of drinks and fans mixed together would seemingly be a recipe for conflict, combined with the fact that rugby is a much more physical and violent game to watch, and yet the rugby fans have a level of class and a respect for competition that I had never seen before. In fact, the rugby fans go as far as to CLAP when the other team scores, regardless of the score of the game and the opponent! I tip my tam o’ shanter to ‘em, but at the same time, there’s no chance I’d clap for a touchdown by the lowly New York Jets.

If you’ve been to any professional sporting event, you’ve probably seen and done the wave. There’s usually a few guys down at the bottom of your section who are more than a few beers deep, throwing their arms up until people get so sick of them that they throw their arms up too. If it catches on, it will probably go around the stadium once or twice, three times max. Good fun, but certainly nothing to tell your grandkids about.

The Scottish wave was one of the highlights of my life. The Scots united in perfect harmony and waved in the name of their homeland. At the start it wasn’t easy. Perseverance and accountability was required all across the board, with no late-20’s drunkards leading the way. The wave started within one section, with neighbors recruiting neighbors. With each failed attempt, the crowd would boo whichever section killed it, shaming them into joining the movement. But once this wave caught steam, it traveled around the stadium 10 or 12 times, gaining speed and strength with every lap. The crowd cheered this wave, giving it life. The game became secondary as the crowd roared the wave on. Even after it died, having lived what I thought was a magnificent life; the crowd still mustered an enormous boo at the section that killed it. That’s just the Scottish way.

After the match we got some delicious Nando’s, which is a Portuguese restaurant/fast food hybrid that has few locations in the United States but none in the Northeast (if its path is anything like Chick-fil-A’s, we’ll get one in 10 to 15 years). Then we walked around the city a bit, hitting some of the historic landmarks and statues on our way back to the car.

While Aberdeen is the third largest city in Scotland, Edinburgh (the largest) certainly had much more of a big city feel. I equated Edinburgh to a supermodel: it’s great to look at, it’s famous and it’s energizing. But Aberdeen is that down to earth lass who just makes you happy. The lass you can have a few pints with and just relax and be yourself around.

The pub beckons, and so does a pint of McEwan’s. Until next time, Black Bears.

Kaur’s “the sun and her flowers” brings peace and joy
#YouMaine: Renaissance singers reflect on their a capella experiences