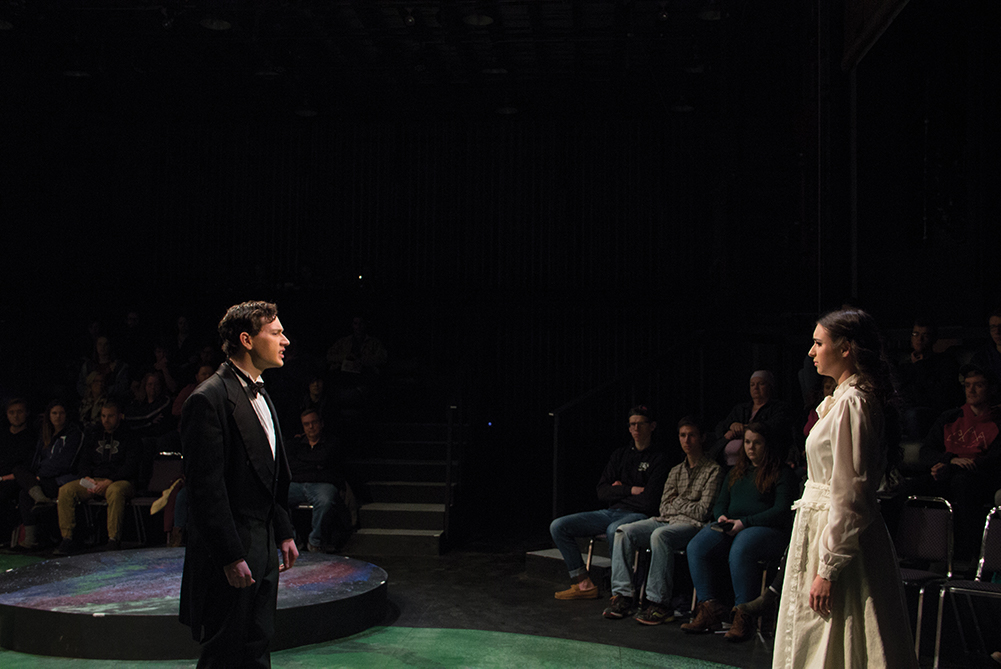 Classical Shakespearean plays are notoriously difficult to pull off, much less excel at. But a Friday, Nov. 10 opening show of William Shakespeare’s “A Midsummer Night’s Dream,” presented by the University of Maine School of Performing Arts, does just that. The show puts its own spin on a timeless love story, using a matchbox theatre style performance to engage more intimately with the audience.

The young lovers’ lusts are toyed with by a group of playful fairies controlling the woods outside of Athens, led by fairy king Oberon (Curran Grant, second-year theatre and secondary education student) and Queen Titania (Natalie Lisnet, first-year music education student), aided by their trusty fairy leader Puck (played by both fourth-year pre-medical biology student Liz Ayotte and theatre student Alan Liam Estes). Ayotte and Estes provide standout performances as a duo Puck, synchronizing their movements, dialogue and facial expressions. The band of mischievous fairies accompanying them provides comedic relief as well as an ethereal aspect to the show, with woodland costumes and glittery makeup to add effect.

And one cannot forget the group of six amateur actors that attempt throughout the duration of the play to put on their own short performance for the Athenian royals (a play inside a play). Led by Peter Quince (Owen Sinclair, a first-year student) and the fabulous Nick Bottom (Noah Lovejoy, a third-year theatre student), the group is comical and entertaining. Bottom often steals all the attention in his scenes with his boisterous and enthused performance as a donkey (transformed by the impish fairies). Perhaps the biggest laugh of the play came in one of the final scenes when Bottom is performing the aforementioned play inside a play, and delivers a line pronouncing the word blood as “blud.” One must appreciate such subtleties in Shakespeare’s work, as many of the performers impressively sped through their lines with passion and gusto.

The cast nailed the difficult test of reciting Shakespearean lines with ease and eloquence, especially considering the number of tongue-twisting monologues and quick-witted dialogue utilizing words not common in our modern vernacular.

The costumes, makeup and set design were unique and distinctive, but familiar enough to invoke classical Shakespeare.

One particular highlight of the show takes place right before intermission, when the young lovers’ troubles are climaxed in an all-out pillow fight. Etro and Dube perfected the balance of emitting girly shrieks while hurling witty insults at their childhood friend turned romantic rival. Their performances left the audience wanting more. The entire cast works effortlessly together, and the dialogue (however difficult) feels natural and impassioned. The beauty of Shakespeare is well preserved in this rendition of “A Midsummer Night’s Dream,” and viewing it feels like being transported to a time where you addressed people by “thou.” This splendid performance should not be missed, and it’s not every day that you get to experience a classical Shakespeare play performed with such excellence.

Third time is not a charm with “Thor: Ragnarok”
Sam Smith thrills us with a stunning comeback