Women cap week off with back to back victories 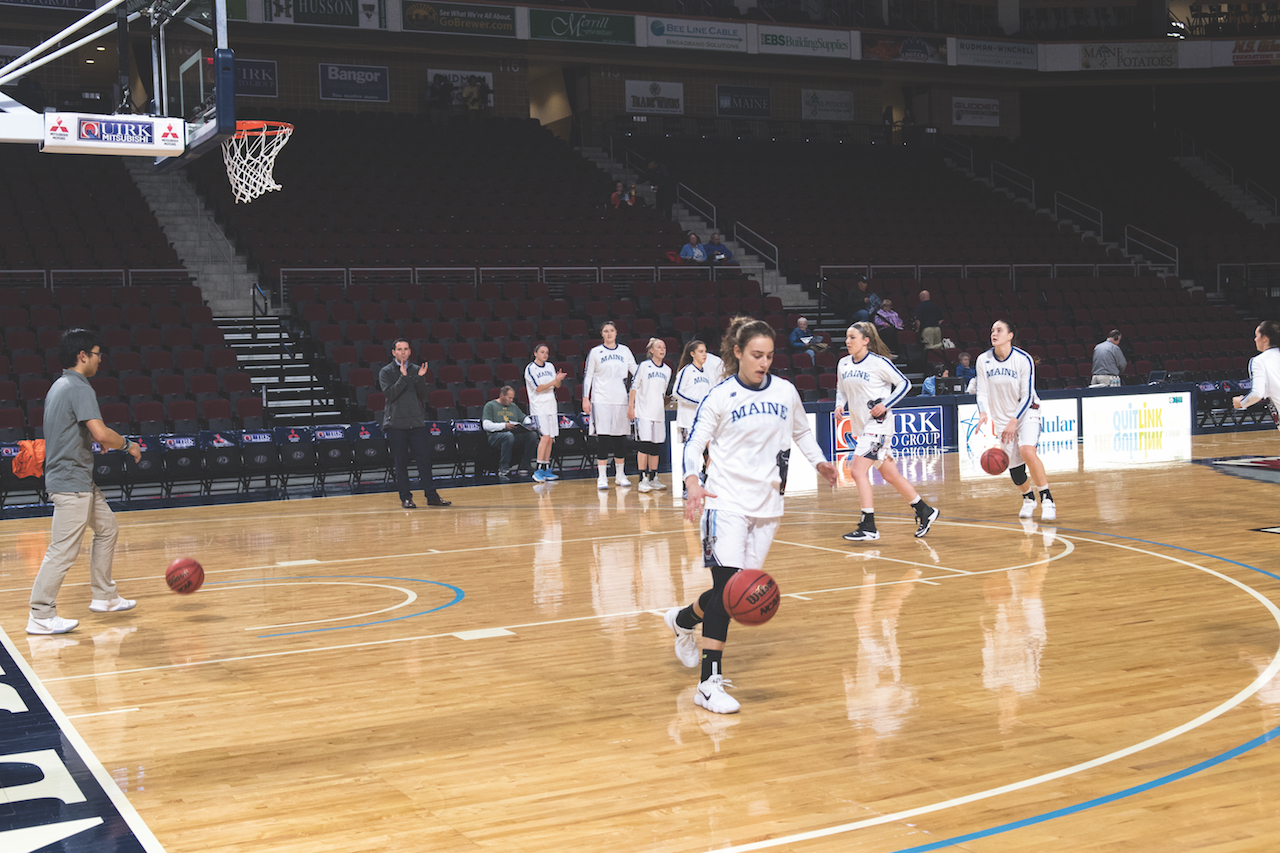 The Bryant University Bulldogs (0-3) have had bad luck this year against the University of Maine. That trend continued Tuesday night at the Cross Insurance Center where the Black Bears women’s basketball team (3-1)  grinded out a 70-68 victory. The Black Bears were led by second-year guard Blanca Millan from Santiago de Compostela, Spain, who recorded her first career double-double finishing with 26 points and 11 rebounds.

The Black Bears came out of the gate slow Tuesday night as the Bulldogs got off on a 10-4 run that featured a lot of second-year guard Sydney Holloway. Holloway scored six of the Bulldogs’ 10 during the run, while blocking two shots and pulling down three rebounds in a span of 3:49.

Maine would battle back after two baskets from Milan and first-year guard Dor Saar. The Black Bears would tie the game up at 16 on a jumper by first-year forward Maeve Carroll, and end the first quarter knotted up.

Maine would start the second quarter on a 7-2 run thanks to Millan and redshirt third-year Tanesha Sutton. Millan would score the first five thanks to rebounds and a great assist by Sutton and Millan returned the favor pulling in the rebound to find Sutton in the paint to put the Black Bears up 27-20. Bryant wouldn’t go down without a fight, clawing back into the game to tie it up 29-29 at the half.

Holloway did it all for Bryant, leading the way for the Bulldogs in the first-half, scoring 12 of her 19 points and hitting the glass hard for 11 rebounds. On the Maine side Millan finished with 10 points and four rebounds.

The second-half featured a power struggle that featured five lead changes between the two teams, but neither team could get the upper hand and the game was sent to overtime after regulation ended 63-63

Overtime featured a new hero for the Black Bears, Millan got it done for Maine all game but in clutch it was Saar. Saar came up huge for Maine scoring five of the seven points scored for Maine in the overtime. Bryant came up short and with one second left, when Carroll sealed the game with a steal of the defensive end.

“A lot of lessons learned, one of them was bring the energy from the top, the start, from the tip. I don’t think we did that. I think we had spurts of energy but it wasn’t consistent, and we were fortunate to come out with the win,” Interim Head Coach Amy Vachon said on the OT victory over the Bulldogs.

The Black Bears face off against University of Maine Fort Kent on Thursday evening at the Cross Insurance Center for the final game of the homestand.

This was a game that featured a team from the United States Collegiate Athletic Association, so many expected a Maine victory. The fashion game was won was a beautiful site for fans who attended. In the first half Maine got out on a 24-7 run which saw them open up the game and finish the first half 50-20.

The Black Bears also outscored the Bengals in the paint 40-6 in the first half and finished the game outscoring their opponents 64-14 under the hoop. Maines transition offense was stellar running the floor and turning the game into a track meet at times that UMFK couldn’t keep up with. Maine outscored UMFK 24-0 in fast break points forcing 25 turnovers on the defensive end.

“Doesn’t matter who you play you gotta bring that energy all the time. I was proud of our kids you know? They did right from the start and I think it continued throughout the whole game and I thought that was good,” Vachon said.

The third quarter was very kind to the Black Bears who shot 13-18 from the field for an incredible 72.2 percent. First-year guard Kelly Fogarty was a big part of that third-quarter hitting three from beyond the arc and getting to the rim for a couple baskets. She scored 13 of her 16 in the quarter as Maine outscored the Bengals 32-11 in Maine’s best offensive quarter of the game. Maine entered the final quarter leading 82-31.

“Kelly’s a shooter you know? The kid can can shoot,” Vachon said. “She can shoot from anywhere. I mean she was 4-10, 40 percent from three is very good, she can shoot better than that as well. She’s a fun one and I was happy to see those shots go for her tonight.”

Maine would finish strong after three straight from behind the arc for Carroll that would put Maine at the century mark for the first time since 1997, when they beat Drexel University 117-72. With the win Maine’s defensive numbers will improve, they already hold the No. 1 spot in America East for opponents PPG at 50.3 for the season.

The Black Bears will travel south to play The University of Miami on Nov. 24. Maine suffered a 76-51 loss last season, but is looking to get revenge next week and extend the win streak to four. Fort Kent returns home to take on the University of New Brunswick-St. John on Saturday. Tip off is set for 5 p.m.