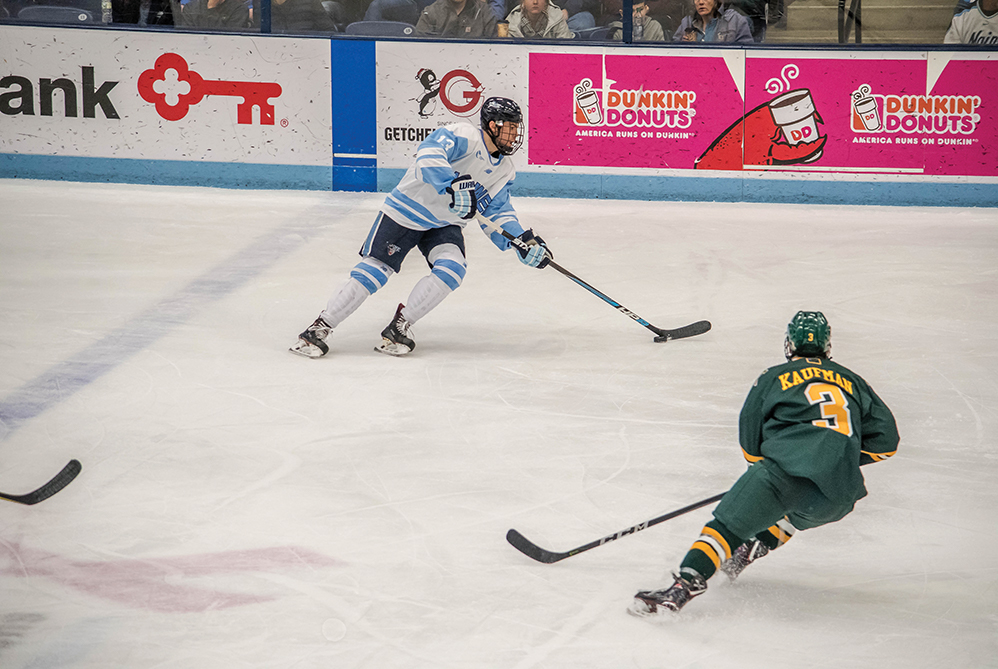 The men’s hockey team returned home after an abroad trip to Ireland that saw the team drop a tough one to Providence and bounce back the next day in a win over Rensselaer Polytechnic Institute. Their first weekend series back in the United States, the University of Maine Black Bears (6-7-1, 4-4-1) took on the University of Vermont (UVM) Catamounts (4-10-2, 1-6-2), tying in Friday’s game 2-2 after a third period collapse, but winning Saturday’s matchup with a convincing  6-2 score at home.

In the first game of the double header fourth-year forward Canon Pieper and second-year forward Peter Housakos netted third period goals for the University of Maine, but UVM second-year winger Ross Colton scored two of his own to spoil Maine’s return home. First-year goaltender Jeremy Swayman did amazing things in overtime to salvage a 2-2 Hockey East tie on Friday night at Alfond Arena. The Black Bears came out of the gate with a full head of steam, peppering UVM second-year goaltender Stefanos Lekkas, who stood on his head at times to keep the Catamounts within striking distance. One of his best moments came when second-year forward Chase Pearson for Maine sent a pass across the ice to first-year forward Eduards Tralmaks. Tralmaks fired a one timer at the right of the circle but Lekkas was there to slam the door shut. Swayman flashed his leather a few times too, making some great saves throughout.

Things didn’t pick up until the third after two scoreless periods. It was Housakos who got things started for the Black Bears, scoring his second goal of the season at 5:36 into the third to provide Maine with a 1-0 lead . The turnover in the neutral zone was picked up by fourth-year center Cedric Lacroix who carried into the Vermont end. Lacroix fired the puck on net and Housakos was in the right place at the right time to tip the puck out of the air and into the back of the net to light the lamp for the first time on the night. The goal ignited the crowd and gave Maine momentum.

Moments later (four minutes to be exact) Pieper joined the two-goal club, finding the back of the net for his second of the season to extend Maine’s lead to 2-0. First-year forward Tim Doherty battled on boards, gaining possession of the puck and finding Pieper, who had it on his stick at the right faceoff dot. Pieper put a nifty move on his defender walking in and sending a beautifully placed shot past Lekkas with 9:11 left in the game.

Unfortunately, Maine struggles to hold two goal leads late in games, and this one was no exception. Vermont’s Colton, who entered Friday’s action with five of his eight goals coming on the power plays, added to his resume 13:26 into the third. Third-year forward Craig Puffer sent a pass across ice to O’Donnell who found Colton at the top of the faceoff circle for a one-timer that found its way past a screened Swayman.

The Catamounts weren’t done and with 1:48 to play, they pulled Lekkas to add an extra attacker. The move paid off for Head Coach Kevin Sneddon as Colton tied the game on his 10th goal of the season. Third-year forward Brian Bowman won the faceoff to Swayman’s left. Second-year forward Derek Lodermeier sent a fancy backhanded pass to Colton, who lined up the puck to fire a one-timer from the top of the right faceoff circle, tying the game with 1:43 remaining.

The Black Bears and Catamounts showed their fatigue in the overtime, but managed to take a combined nine shots in the five minute overtime period. Neither team could get the game winner and the final horn sounded with a score of 2-2.

Maine outshot Vermont (43-24) but Vermont held a slight advantage in faceoffs (37-31). Swayman, a fourth round pick by the Boston Bruins in this year’s draft, finished with 22 saves while Lekkas, who played out of his mind all game, finished with 41.

Maine Bounces Back, down Catamounts 6-2

Second-year forward Mitchell Fossier had a career night, dishing out a career-high three assists, while fourth-year forward Nolan Vesey found the back of the net twice and second-year defenseman Patrick Holway notched three points on one goal and two assists in a dismantling of the Vermont Catamounts.

The Catamounts, who were looking to get a second within Hockey East conference play, took advantage of an early power play and found themselves with an early 1-0 lead on a Bowen goal at 4:19 of the first period. The Black Bears, who were looking to be over .500 in Hockey East, responded just three minutes later with a power play goal of their own. Fossier slid the puck to third-year defender Rob Michel, who sniped a shot that found its way inside the left post. Vermont found themselves back in the penalty box to give the Black Bears a power play that led to another goal for Maine thanks to Doherty grinding his way to a fourth goal of the season when he stuffed the puck past Lekkas. The first period would end 2-1 in favor of the Black Bears.

Three minutes into the second period, first-year defenseman Brady Keeper scored what would be the eventual game winner after he had his shot blocked, but second-year forward Brendan Robbins collected the puck and flicked a wrist shot in from the right circle.

Vermont wouldn’t go away and kept themselves alive when Puffer took advantage of the man-advantage. But the Black Bears defense led by Swayman made at least 10 saves in each period — 20 in the second period of action — to keep the Black Bears in the lead. It wasn’t just Swayman making the saves, unselfish play was key to the Black Bears’ success. The Black Bears finished with 16 blocked shots, including four from third-year defender Keith Muehlbauer who put his body on the line to help his star goaltender.

A good defense is one’s best offense, some say, and the Black Bears offense was far from finished with Vermont. Two minutes to go and Holloway had the puck on his stick coming out of the Maine zone and with great vision up ice found Fossier for a one-time shot at the right dot. Fossier waved on the shot, but was able to get just enough on it to find Vesey. Vesey circled around the zone toward the blue line, then turned and sent a firecracker of a wrist shot through traffic and found the top right corner of the net.

Vesey wasn’t finished either as he scored Maine’s next goal. Fossier dangled and dropped the puck back through his legs to Pearson at the bottom of the circle and Pearson passed the puck across the crease to to Vesey, who buried the puck top left.

Maine was whistled for a penalty with 2:10 to play and Lekkas made his way to the bench. The Black Bears were up against a 6-on-4 but withstood the UVM onslaught before the inevitable happened thanks to Holway’s empty-net finish with 21 seconds to play. Maine earned the victory 6-2.

Swayman finished with 39 saves to 28 for Lekkas while Vermont held the final edge in shots on goal (41-34). The Black Bears will close out the fall semester with some non-conference action when they travel south to take on the Quinnipiac Bobcats on Friday, Dec. 8 and Saturday, Dec. 9. The University of Vermont will return home to play Brown University on Saturday, Dec. 9. Puck-drop is scheduled for 7 p.m.