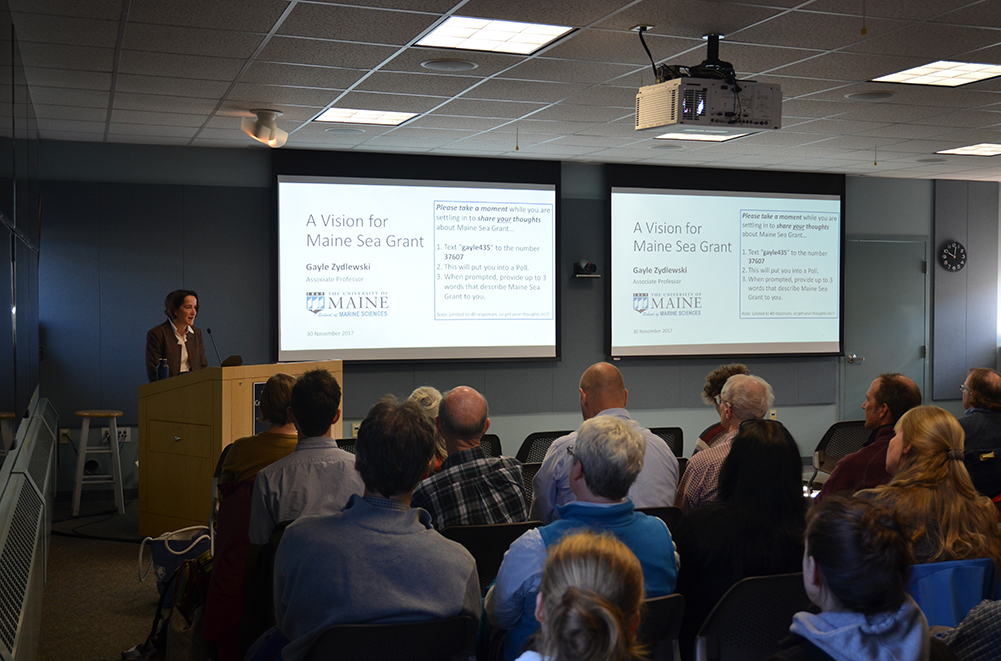 Dr. Gayle Zydlewski speaks in front of faculty and staff about running for the position of the director for the Maine Sea Grant program. The speech took place on November 30th in Norman Smith Hall. Photo by Ian Ligget, Staff.

The Maine Sea Grant, a National Oceanic and Atmospheric Administration (NOAA) grant program, has narrowed down applicants for Director of the Sea Grant to three finalists. NOAA awards roughly $1.2 million a year to the Sea Grant, according to the job description.

The chosen finalist will replace the former director, Paul Anderson, who has stepped down as director for a position at the Maine Center for Coastal Fisheries.

“Approximately 50% of the NOAA funds are distributed for research and education projects, awarded through a biennial peer-reviewed competition, with the remainder supporting management, outreach, and education programs,” according the the job description for the director position.

The position is on the seventh band of the salaried pay schedule and therefore pays between $61,535 and $102,560 a year.

Dr. Gayle Zydlewski, associate professor of marine science at the University of Maine; Dr. William G. Ambrose, Jr., professor of biology at Bates College; and Dr. Michael C. Rubino, director of the Office of Aquaculture at NOAA are the three finalists.

The finalists are required to give a presentation on their vision for the future of the Sea Grant. Zydlewski, whose research focuses on sea-run fish, presented her vision on Nov. 30. Ambrose, who has taught biology at University of Oslo, Norway; East Carolina University and Williams College presented on Dec. 1. Rubino, who has 25 years of experience in agriculture, aquaculture and Marine resources management, will present on Dec. 4.

Zydlewski worked at the University of Maine as a postdoctoral research associate from 1996 to 1997, according to her curriculum vitae. She returned to UMaine in 2012 after holding positions at UMass Amherst, the Conte Anadromous Fish Research Center and the Abernathy Fish Technology Center.

“I look at this as an opportunity to have an impact beyond the impact my science is making,” Zydlewski said at her presentation.

During her presentation, Zydlewski said expanding the scope of the Sea Grant and finding new sources of funding was one of the goals for Sea Grant projects.

“I know the funding atmosphere is really difficult,” Zydlewski said.

Zydlewski also said the Sea Grant should focus on the relationship between the land and the sea, such as the Penobscot watershed and dam removals. Zydlewski suggested hiring an extension agent for the Penobscot River estuary area.

In 2015, Ambrose was appointed to a one-year term as the program director for NOAA’s Arctic Observing Network (AON), where he managed over $12 million according to a Bates News article by Kent Fischer. The AON uses buoys and satellites to observe environmental change in the Arctic.

Rubino received his master’s degree in economics and his Ph.D in natural resources from the University of Michigan, Ann Arbor. Rubino’s current role at the NOAA aquaculture program requires him to manage a $9.3 million budget and coordinate the administration of at least $10 million a year in grants, according to his curriculum vitae.

Rubino has worked for the Carbon Finance Unit of the World Bank, the International Finance Corporation and the Palmetto Aquaculture Company. In 1987 he co-founded the aquaculture company Bluewaters, Inc.

#YouMaine: Isaiah Brooks wants to see Tie Tuesday become a campus-wide event
“Stuff You Should Know” but do they know?