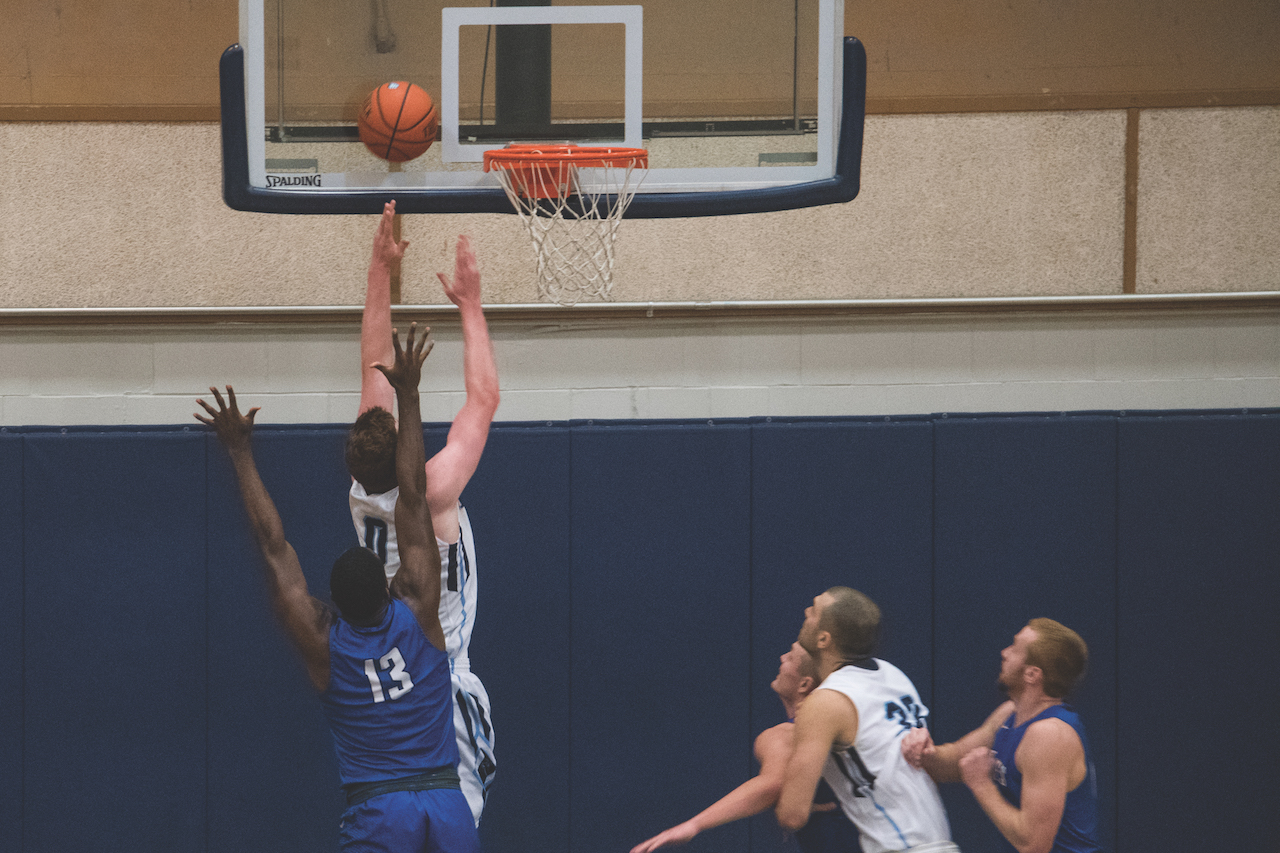 Big East rival Georgetown University (5-0) proved to be too much of a challenge for the University of Maine men’s basketball team (1-7) on Tuesday night at Capital One Arena in Washington, D.C. The Hoyas rode a dominant first half en route to a 76-55 victory in the first meeting between these two teams.

A fast start propelled Georgetown in the first 20 minutes. An 11-2 run out of gate forced Maine to call an early timeout. The Hoyas notched 40 points in the half, while holding the Black Bears to 24. Third-year forward Kaleb Johnson of Georgetown led all scorers with 18 points, and was one of five Hoyas to reach double figures on the night. Third-years Jessie Govan and Marcus Derrickson followed with 16 and 12 points to balance out the attack.

Redshirt third-year guard Aaron Calixte impressed with a team high 17 points for UMaine. He converted six of his nine shot attempts, and tallied five rebounds and a steal. Calixte was on the floor for a team-high 33 minutes.

Third-year Ilker Er turned in a solid performance off the bench, scoring 13 points and grabbing six rebounds. First-year Dennis Ashley chipped in 8 points of his own. Overall UMaine led in bench points (32-19).

Despite the 21-point loss, Maine’s play shined at times. They held Georgetown 9 points below their average on the season and to just under 23 percent shooting from beyond the arc.

Georgetown entered the game having made 47 percent of their three-pointers, which was good for fourth in the nation. The team also lead in offensive rebounds (14-13) and in blocks (5-4).

The deciding factor was turnovers. Maine committed 18, to the Hoyas’ 12.

On the game Georgetown led in total field goal percentage 46.3 to 36.7. Neither team shot well from three-point range, with the Hoyas shooting 22.2 percent, while Maine shot a dismal 17.4 percent from beyond the arc.

Despite the inconsistent play, the team showed strides in the second half. They cut the Hoya lead to 12 with under 10 minutes to play in the second half, but Georgetown used a 9-0 run to quash any hopes of a Maine comeback.

The Hoyas will return to the court on Sunday, Dec. 3 for a matchup against Coppin State. Tip-off is set for 6:30 p.m. at Capital One Arena. Maine returns to action Saturday, Dec. 2 when they travel to New York to take on Fordham, the final game of their three-game road trip. The game is set for a 2 p.m. tip-off at Rose Hill Gymnasium.

UMaine Men’s basketball lost an overtime thriller to Fordham University (3-4) 67-66 on the afternoon of Saturday Dec. 2 at Rose Hill Gymnasium down in the Bronx, NY.

Maine was less than four and a half minutes away from picking up their second win on the season when the Rams went on a 8-0 run to take a 60-57 lead with close to a minute to play. Er drained a three pointer with 42 seconds left in the contest, ultimately forcing the game into overtime. Er finished with 15 points off the bench for Maine.

Defense took over in extra time, with the score staying the same until Fordham scored a quick four points to take a 64-60 lead with under two minutes to go. The Black Bears answered back, converting on one of two attempts from the charity stripe, but Fordham answered with a made free throw attempt of their own, keeping their lead at four. The Black Bears made two more free throws to cut the Fordham lead to two once again, and had a chance to tie the game at 66 all. Unfortunately, they turned the ball over with just three seconds left. Maine fouled third-year guard Joseph Chartouny who was able to hit one of two shots. The Black Bears inbounded the ball and third-year guard Celio Araujo nailed a half court. Unfortunately the Brazil native’s incredible effort wasn’t enough, as time expired shortly after.

Araujo had a career mark of eight assists in 33 minutes played.

Maine’s offense was lead by Calixte who scored 20 points, and was a perfect 7 for 7 from the free throw line. He added four rebounds and two assists before eventually fouling out in overtime.

Second-year Andrew Fleming played a solid game of his own, notching a double double of 16 points and 13 rebounds in a team high 41 minutes of play.

Maine held the lead for 28 minutes of the 45 minute game. The game was tied for an eight minute stretch as well. Overall there were nine ties and nine lead changes throughout.

Chartouny lead all scorers in the game with 21. Fordham had help from third-year Prokop Slanina who chipped in 15 points and fourth-year Will Tavares who had 15 as well.

Maine held the edge rebounds 42-37 overall, including ten on the offensive side.

Fordham remains home to take on Harvard University on December 6. Tip off is set for 7:00 p.m.

Maine will come home to play the University of Maine at Presque Isle on Tuesday, Dec. 5 at the Cross Insurance Center in Bangor, following the women’s game. The game is set for a 7:30 p.m. start.