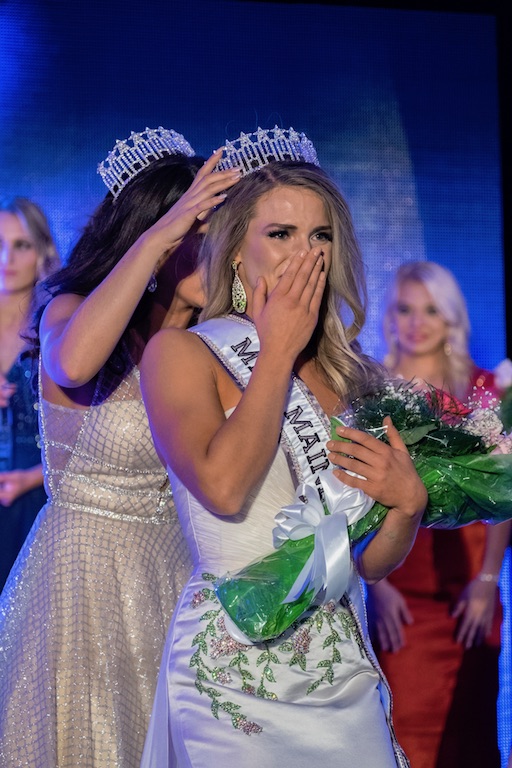 On Nov. 26, a Trenton native Marina Gray was crowned with the title of Miss Maine USA. Gray is a 2017 graduate of University of Maine with a degree in interpersonal communication and a minor in psychology.

This was Gray’s first time competing in a pageant. At the age of 16, Gray emancipated herself from her parents due to the adversities she faced growing up.

“Having to be an adult so quickly, I never focused on beauty in my life. I wanted to maximize that experience by doing the most extreme thing I thought was possible — competing in the super bowl on pageantry,” Gray said.

After graduating from high school a year early, Gray joined the United States Army National Guard where she currently holds the rank of a Sergeant. Gray received the 2015 Soldier of the Year and a 2017 Non-Commissioned Officer of the Year award in her unit.

“It is a sacrifice that I am committed to do and I have to stand by my commitment,” Gray said about her duty. “It is an honor to serve the military and represent the state of Maine and our country through pageantry.”

She believes that her military career played a key role in shaping her character.

“It wasn’t necessarily because of my beauty that I won the title, but because of the hard-working mentality that the military training gave me. Being a good soldier has nothing to do with my size, gender, or the way I look, and I learned that nothing can prevent you from being as strong as you feel.”

Gray prepared extensively for the pageant for over two months, and the most challenging part of the training was learning how to confidently walk in heels. Another obstacle she had to overcome was her doubt.

“Sometimes you don’t think you’re worthy of the good things in your life so it’s important to take everything as it comes,” Gray said. “I had to learn to truly believe in myself, and 100 percent feel that I was worthy of the title. Why would I compete if I wasn’t a good candidate? I tried to remind myself that I was a good candidate, and that’s not the easiest thing to do.”

An avid hiker and a skier, Gray seeks inspiration from nature and most importantly, from her younger self.

“I want to fulfill the dreams of my younger self and never look back to wish that I’d done anything differently.”

While competing for the Miss Maine title, Gray made an active effort to enjoy every moment of it, and make lasting connections with the people she met.

“Meeting amazing, strong people in the industry of pageantry was the most rewarding part of it,” Gray said. “It is an extremely supportive industry, which is important to me; I didn’t have a family system growing up. There are people who want the best for you and everyone works together to help out outside of the industry. I’ve found the most like-minded people in the universe and I know that they are the friends I will have for the rest of my life.”

Chair of the Communication and Journalism department Nathan Stormer is one of the people at UMaine who helped Gray grow as a student.

“He always had faith in my abilities as a communicator and I thank him for always seeing that in me,” Gray said.

“Marina [Gray] was an excellent contributor. She always had sharp comments and thought beyond what we were reading and discussing,” Stormer said about having Gray as a student. “ Marina [Gray] elevated the class with her participation. She has a very agile mind and thinks freely, making connections across different courses and material. She was always trying to learn fully, not just nail down what she needed to score well enough on assignments. That makes all the difference.​”

With her new title, Gray is eager to use her voice to shift people’s perception of pageantry.

“This wasn’t the path that I thought I would take, but this crown is an opportunity to spread a positive message and make a difference in the community, state and our country.”

“​I think she will be very successful in whatever she does,” Stormer said. “She works very hard, is disciplined, and has standards for herself. Those basic qualities are key ingredients to being successful. She is going to be great.​”

A week after winning the competition, Gray, still in shock, is gearing up to compete in the Miss USA pageant set to be held in late May of next year. Within three days of winning her title, Gray has gotten in contact with Deshauna Barber, a captain in the United States Army Reserve and Miss USA 2016. Both Gray and Barber share the experience of being in the military.

Her advice to current UMaine students would be to focus on the relationships they are building.

“College goes by super fast, and friendships you make there will be important to you in the future,” Gray said. “And never be afraid to go to York dining for buffalo chicken on Wednesdays, even if you’re a senior, because you will miss it.”