Brooke Stacey continues to be a force for women’s hockey 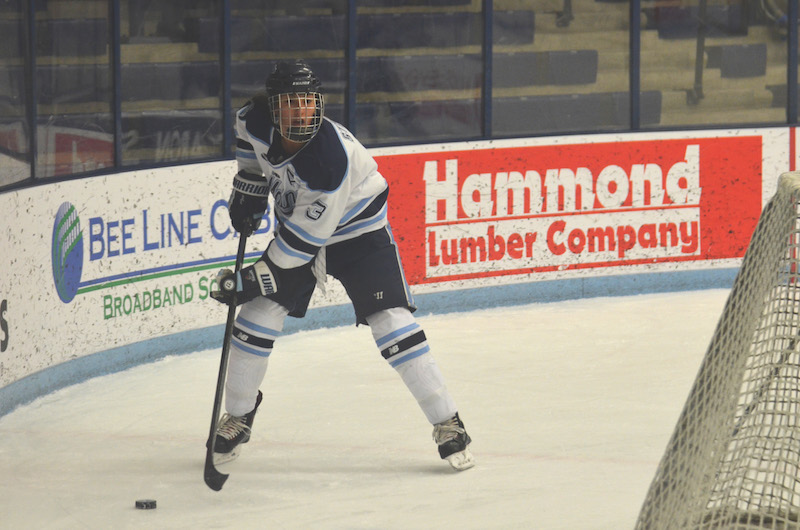 Brooke Stacey looks to make a pass from behind the net, file photo

The Black Bear women’s hockey team (16-7-3) has been having a successful season so far, ranking No. 10 in rating percentage index. Before losing to Merrimack College on Friday, Jan. 19 and Saturday, Jan. 20, the team went on a nine-game winning streak. However, one player for the Black Bears has been a consistent threat for the past three years.

Brooke Stacey, a fourth-year sociology student from Kahnawake, Quebec, Canada has really made an impact these past three seasons. In her first-year campaign, the 5-foot-10-inch forward finished with three goals and 11 points. In her second year, she finished second in points scored in the season with 18. Last season, Stacey again finished second in points in the season, this time with 15 goals and 13 assists for a career-high 28 points. She was also the runner-up for best defensive forward.

“Coming into this year, I wasn’t sure what to expect. Our seasons have been different every year so I didn’t have many expectations. I think the key coming in was to just keep building confidence in my play, every year,” Stacey said.

Not only is this Stacey’s final season, but she is also a part of the leadership group for the Black Bears, along with third-years Cailey Hutchison and Alyson Matteau.

“Becoming an assistant captain has helped me become more positive on and off the ice. I don’t think there is any pressure coming because of that, I didn’t want that to happen because I don’t think I’d perform my best if I did.”

Stacey has been rewarded for her hard work at the collegiate level. For the second year in a row, she was invited to play for Team Canada at the 2018 Nations Cup in Fussen, Germany in January. Last year, she won a silver medal with the team at the same tournament and prior to Maine, she won a gold medal with the U18 Canadian National Team at the World Hockey Championships in Budapest, Hungary.

“The experience was great. We didn’t get the end result that we wanted but I think each player benefited from the experience in some form. Being able to represent Canada definitely builds my confidence for when I come back to play for Maine.”

Off the ice, Stacey is just as successful. In the classroom, she is a three-time honoree for Hockey East All-Academic Team. In order to be recognized, a student-athlete must achieve a grade point average of 3.0 or higher in each of the two semesters during which they were competing.

“It is hard to balance athletics and academics but managing your time is definitely the key to being successful both in the classroom and on the ice.”

The Black Bears are currently sitting third in Hockey East standings, just behind Providence College and Boston College. Last year, the team finished last in conference play with a record of 6-17-1. With only six games remaining in the season, every little bit counts.

“Lately, we’ve been pretty confident in our play. We know what we have to do to win and that is helping us. We had such a big change from last year to this year. I think we have more depth in our team and we are confident in our potential going forward.”

Confidence naturally comes with winning and performing at a high level. But it is easy for teams to get too confident when things are going their way for a long period of time.

“We do think about the standings because they are important. That being said, we don’t let it change our performance or attitude. The main goal as a team is to win Hockey East and to ultimately make it to the Frozen Four.”

As her time putting on that blue and white jersey comes to an end, Stacey has set a new goal for herself after college.

“I am not too sure what I am going to do after this year. I am going to try to place in the CWHL (Canadian Women’s Hockey League) and see where I go from there.”

The CWHL is a professional hockey league in Canada that was established in 2007. The league includes seven teams located in Canada, the United States and China. The Black Bears return to the ice Friday, Feb. 2 and Saturday, Feb. 3 when they take part in the border battle against the University of New Hampshire Wildcats. Puck drop is scheduled for 2 p.m. at the Alfond.