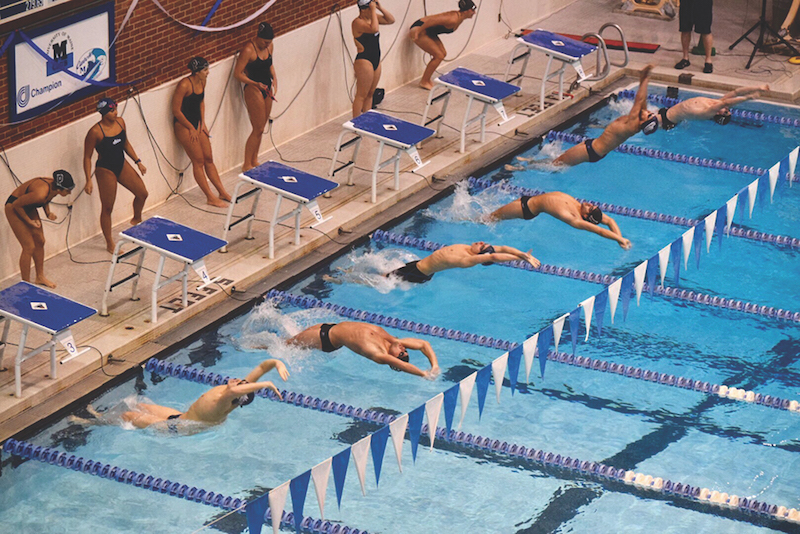 The Black Bears compete at the Wallace Pool, file photo

The UMaine men’s swimming and diving team finished off the regular season with a loss to the Providence Friars at Taylor Natatorium on Saturday, Jan. 28. The rival Friars topped the Black Bears by a score of 177-111.

Despite the loss, Maine’s A team shined in the opening event, winning the 200-meter medley relay. First-years Hayden Kasavicha, Jack McNamara, Jacob Ketch and fourth-year Kevin Clyne all contributed to the victory. The final time for the team was 1:48.09, which earned the squad 11 points.

Clyne and Ketch contributed in the 200-meter freestyle as well, helping the team take home second place with an end time of 1:39.09. They were also aided by teammates first-year Andy Sprague and second-year Coulter Morrill.

In the 100-meter freestyle, third-year Alexander Penn finished third with a time of 54.02. He finished a half second behind first-year Friar Sebastian Melendez and a tenth of a second behind second-year Patrick Brannigan

In the 100-meter breaststroke and 200-meter medley, Maine once again was helped by one of its newcomers. First-year Kazu Temple finished second in both the events, with times of 1:08.29 and 2:14.11 respectively. The Palo Alto, Calif. native also finished third in the 200-meter medley relay with a time of 1:51.11.

In the 800-meter freestyle, first-year Alexander Watson placed second with a time 9:09.70. Watson’s results would wrap up Maine’s top performers on the afternoon.

The UMaine women’s swimming and diving team lost 167-106 on the evening of Friday, Jan.  26, to the Wildcats of New Hampshire at Swasey Pool.

Maine took home first in three events of the night.

In the 500-yard freestyle it was redshirt second-year Gabrielle Murphy finishing with a time of 5:19.21. Her time was good for a first place finish.

In the 100-yard butterfly, fourth-year Victoria Kingston completed the event in 59.08., good for another first place finish.

In the 200-yard freestyle relay, the squad of fourth-year Emily Borger, second-year Emma Blair, third-year Julianna McDonald and second-year Sabrina Nuttall finished first with an end time of 1:38.69. For the bulk of the swimmers on this team, the action wasn’t over. Along with first-year Rita Chen, Blair, Nuttall and McDonald finished with a time of 1:50.00. Just behind them group of first-year Ines Khiyara, third-year Megan McGillivray, Kingston and Borger, who ended with a time of 1:51.84, which was good for third place.

McGillivray would also earn a second place finish in the 100-yard backstroke, earning a time of 1:00.21. First-year Caroline Strolic finished right behind her in third, registering a time of 1:01.73, and also found herself in second place in the 200-yard breaststroke with a time of 2:30.49.

The UMaine women’s swim team ended their regular season on a positive note on the afternoon Saturday, Jan. 27, by beating the Providence Friars 161.5 to 133.5 at Taylor Natatorium.

Both relays were won by Maine on the day. First, it was the A team of McGillivray, Borger, Chen and Nuttall taking home the 200-meter relay posting a time of 2:02.11. The victory earned the team 11 points. The B team consisting of Blair, Khiyara, McDonald and Kingston finished second with an end time of 2:03.67. The Providence A team of third-years Juliet McLaughlin and Abby Czerniecki and first-years Katie Thornton and Lauren Zawacki prevented a Maine sweep.

In the 200-meter freestyle relay, Blair, Chen, Borger and McDonald earned the team 11 more points finishing with a time of 1:49.95. Their performance was good for another first place finish.

The overall 161.5 points is the most the team has posted since they scored 172 against Rhode Island at the start of the season.

Both the women’s and men’s swimming and diving teams will travel to Worcester Polytechnic Institute on the weekend of Feb. 15, where they will compete in the America East Championships.

The No. 9 Black Bears drop their weekend series to UConn
Brooke Stacey continues to be a force for women’s hockey