True North Theater premieres “The Lion in Winter” in Orono 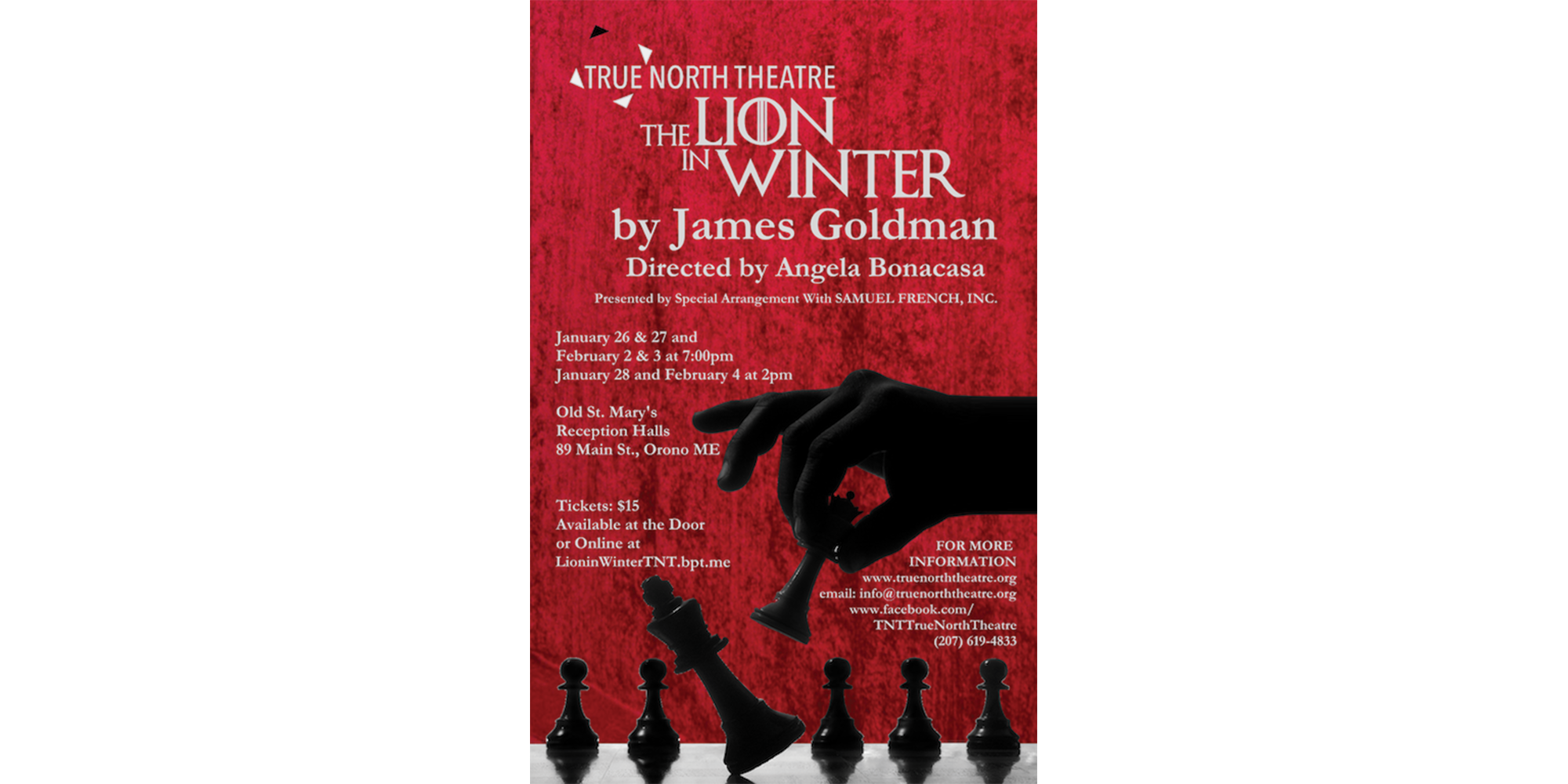 Written in 1966, “The Lion in Winter” is set during Christmas of 1183 in medieval France. At his chateau in Chinon, 50-year-old King Henry II of England is in the midst of deciding which of his three sons will inherit his kingdom. Richard the Lionheart, a celebrated soldier, is the oldest, toughest, and most suitable son for the throne. He is also his mother, Queen Eleanor’s, favorite (she tried to kill her husband Henry and therefore was imprisoned for the past 10 years). Geoffrey, the middle son, posses the most intellect and the least morals out of three. He is neither of his parents’ favorite, which drives him to scheme against both of them. The youngest son John, although Henry’s favorite, does not possess any qualities of a king. The trait that unites all three sons is the love of power and lack of actual ability to love their family. After finally realizing that, King Henry’s heart is broken as he decides to annul his marriage and have new sons with his mistress Alais, the Princess of France (who was engaged to Henry’s oldest son Richard since the age of 8).

The play was spectacular. Comprised of seven actors and two vocal performers, this play was one of the more word-heavy ones I’ve seen. The venue is in the former St. Mary’s Church which was recently turned into a reception hall. Sitting in the pews, the audience members were hit by the wind that remained as the princes stomped by.

The play demonstrates what a struggle it must have been to be a king during medieval times. Between ruling the kingdom, keeping track of his imprisoned wife, and his mistress, Henry has to deal with his power-hungry sons who lack what it takes to be a good king, and more importantly, a good person. The play is filled with sons plotting and scheming against each other and their father. Yet the most intricate and interesting of power struggles is between Henry and Eleanor. You can never tell whether these two hate each other or are just trying to hurt each other out of heartbreak. They are both witty and wise, which puts them two if not three steps ahead of their children. Actor, director and University of Maine faculty member Julie Lisnet does an outstanding job of portraying Queen Eleanor. Despite being on crutches, Lisnet played her character with such wit, spite and charm that it was impossible to picture anyone else as Queen Eleanor.

“This role was on my bucket list of roles to play,” Lisnet said, after wrapping up the play with standing ovations from the audience. The play had a lot of lines to memorize, and Lisnet shared that the key to executing them well is listening. “It’s an immensely wordy show so you have to actively listen.”

Lisnet and Aimee Gerow (Alais, a French Princess) worked together on several productions in the past, with Lisnet directing the plays, but this was the first time that the two actors got to share the stage together.

“This is such a fine play to work with, and it was truly an honor to work with all the actors,” Lisnet said.

A Bangor-based actor Connor Kenny, 20, portrayed one of his debut roles as Philip, King of France. He was recently accepted to the Young Americans College of the Performing Arts in California.

Angela Bonacasa is the artistic director of True North. She has directed for numerous Maine theaters for the past 10 years, including Penobscot Theatre Company, Orono Community Theatre and The Centre Theatre in Dover-Foxcroft. She chose this play because she is a big fan of the 1968 film of the same title starring Katharine Hepburn and Peter O’Toole.

“This play is based on historical characters but has nothing to do with history,” Bonacasa said. “The actors are really devoted and work so well together.”

Her favorite part of this process that started in October of 2017 was the first day that the actors got to read their lines to each other.

“When you read it out loud after reading it on paper, you suddenly see it come to life.”

Next in production for True North Theatre is “Table Manners” by Alan Ayckbourn, showing on June 8-10 and 15-17.

“The Lion in Winter” will be playing at Old St. Mary’s Reception Hall on 89 Main St. in Orono on Feb. 2 and 3 at 7 p.m. and Feb. 4 at 2 p.m. Tickets are $15 and are available at the door or online at lioninwintertnt.bpt.me. More information on the recently founded theatre is available at truenorththeatre.org.