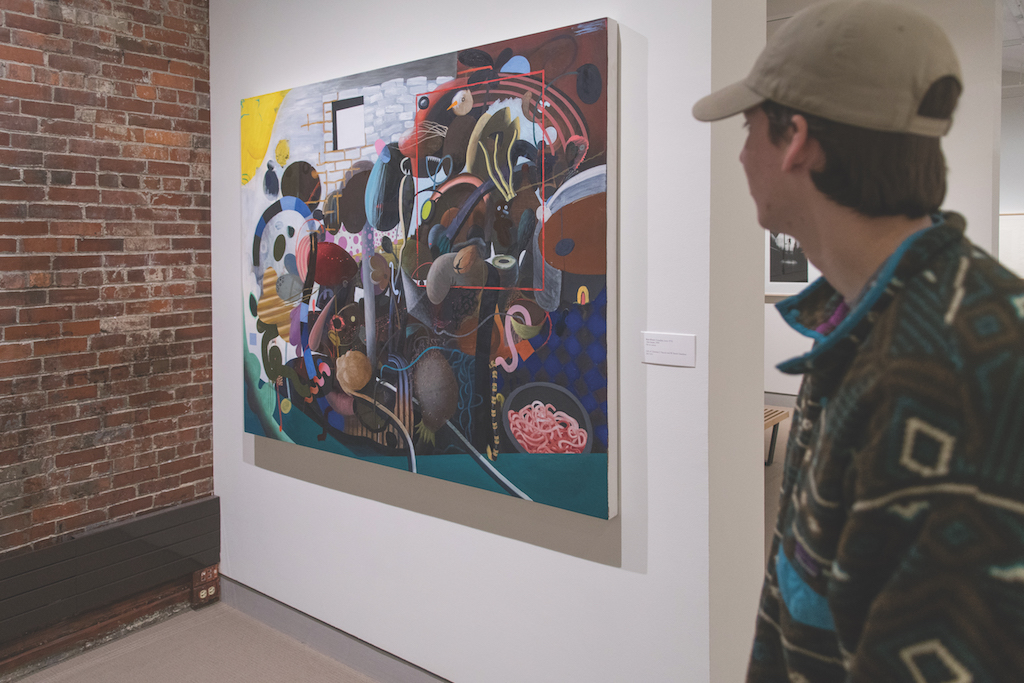 New exhibitions are on display at the University of Maine Museum of Art in Bangor. Photo by Evan Loignon, Staff.

For their winter exhibition, the University of Maine Museum of Art welcomes four new collections from artists Craig Taylor, Andrea Sulzer, Caleb Charland and Poogy Bjerklie. Playing with colors and textures through a wide range of mediums, these four installments show the potential of audience interpretation.

“The Elastic Cache,” a collection of 20 works by New York-based artist Craig Taylor, depicts abstract and enigmatic objects that leave room for analysis. In the collection, Taylor uses oil on canvas, acrylic on paper and aquatint etchings. In some pieces, he layers natural or monochromatic tones, while in others he combines primary colors. Juxtaposed, the difference in color allows the audience to see each work with fresh eyes.

The exhibit titled “Entangled Pairs” from Maine-based artist Andrea Sulzer contains sculptures as well as paintings. Sulzer’s 29 works use vibrant colors and bold imagery to depict natural scenes and create compelling sculptures. Sulzer’s style allows many of the forms within her pieces to seem hidden and revealed through exposure. Her method of creating a sculpture is to sew together long strips of tracing paper printed with original woodblocks, which create a spiral of texture.

In a reflection on the process to the museum, Sulzer states, “It’s a constant pull between building a foundation and dismantling it, always trying to get closer to the underlying rhythm of and motivation for making work.”

A possibly unintended effect of the exhibit is a reflection on gallery composition itself. Sulzer’s pieces are not accompanied by a plaque of explanation. There are maps available within the exhibit if desired by the audience, which divulge the works’ titles and materials. This removes a level of cognitive consumption and pushes the audience to view the works from a slightly different perspective.

Perspective is affected again when considering the 3-D pieces which hang on the walls of the gallery. The way the light hits these pieces changes the shadows and in turn the perception as a whole. The piece is constructed in two parts which sit on opposite sides of a wall. The audience may not realize this, which opens the door for interpretation as both secular parts and as a whole.

In an exhibition “Shadows of Earth,” Maine-based photographer Caleb Charland features a selection of his recent gelatin silver prints, cyanotypes and pigmented ink prints. Inspired by the medium of photography itself, many of Charland’s works are composed by manipulating the process.

In some pieces, he folds the photo and copies one half of the print onto the other in black and white. This process creates a hypnotic mirrored image. Inspired by the Maine landscape, in one series he uses this method to show Maine bodies of waters inverted to reflect as the sky.

“Having grown up in Maine, and it being so beautiful, I have always found myself retreating to nature to refill my creative bucket. So it was a natural subject,” Charland said. “I like the idea of using the body to push the camera through nature.”

Charland frequently plays with the movement of his body in the creation of the images. In a series of photos, he placed the camera lens on his chest and pointed it at the night sky set to a long exposure. The artist’s breathing is recorded as streaks of stars and planets.

In all of his photos, Charland shows the world from his perspective.

“There is a transfer of wonder through photos. I don’t really go into it hoping to affect people, but I hope that it will inspire the audience to look at the world in a fresh or new way,” Charland said.

In artist Poogy Bjerklie’s “Nowhere in Particular,” memories of growing up in Hallowell, Maine and summering on Richardson Lake translate into 11 oil landscapes painted on square wood panels. Her style portrays these scenes through a foggy and blurred lens. This romantic and nostalgic perspective acts as a gateway to her childhood. In her artist’s statement, Bjerklie says that her paintings “act as memories of a place to escape to.”

This year, Admission to the Museum of Art is free with the support of Deighan Wealth Advisors, an investment advisory firm located in Bangor. The winter exhibitions will be available for viewing through May 5 of this year.