A renaissance fair and chowder for folks from away 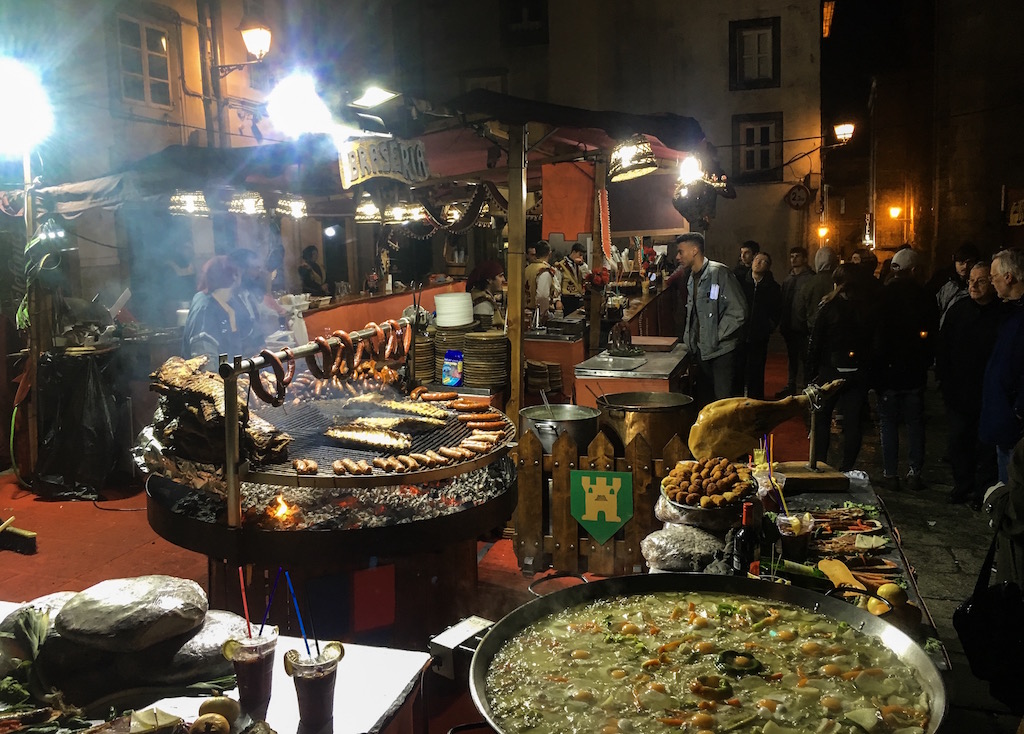 A vendor selling sausages, stew, and a pig’s leg in Santiago’s renaissance festival. Photo courtesy of the writer.

On Sunday it stopped raining for the first time since I arrived in Santiago. That sounds like an exaggeration but I truly hadn’t seen the sun in 10 days. With the walls of dreariness finally gone, I took to the hills surrounding the city for a day of mountain biking and exploring. After huffing and puffing my way to the top of the biggest hill I could see, I discovered a matrix of single-track bike trails spreading for miles from the summit. The sight of me on my pawnshop-bought, 70 euro mountain bike drew plenty of sideways glances from the more serious riders, who were riding top-of-the-line bikes and were decked out in full protective pads.

I thought the city was beautiful before, but I wasn’t prepared for the green, endlessly rolling hills speckled with orange terra-cotta rooftops that I could only see on a sunny day. After a stomach-turning streak down the mountain that turned my wrists to powder and tried to disassemble my bike, I decided that I would come back when I at least had a helmet.

Feeling refreshed after my morning of flirting with backcountry injury, I met my roommate, Lisandro, and hit the town. We discovered that the city was holding a renaissance festival, complete with period-appropriate food and costumes for the participating vendors. From my experiences with historically themed fairs in the United States (few and far between), I’ve come to expect a degree of kitsch and half-hearted ornateness. I was surprised by the effort put forward by the town. Tented booths covered sausage makers, bakers and jewelers crafting their wares. A trio of musicians: guitarist, bagpiper and drummer, strolled the narrow stone streets, walking the razor-thin line between entertaining and driving me to distraction. Appreciation of bagpipes is a skill I’ve been slow to pick up.

I’ve been in classes for three full weeks now, and I’m relieved to be breaking through the language barrier that has been such a stressor on my time here so far. My comprehension is still around 40 percent, but the professors and especially the other students now understand the true depth of my ignorance, and are gleefully attempting to simplify everything to a level that a 6-year-old could understand. I received applause for reciting three error-riddled sentences about Robert Mueller’s Russia investigation in Spanish.

Because I’m a glutton for embarrassment, I agreed to an invitation to play futsal, a variant of soccer played on a small concrete court, with a collection of international students, mostly from Central and South America. I showed up and proceeded to get scolded for an hour. To be honest, I think I impressed them just a little, as unwilling as they were to admit it.

In my quest to spread Maine’s culture, I’m cooking a huge pot of fish chowder for my roommates tonight. We decided to have dinner together on a weekly basis. Last week, Nicola, from Italy, made us pasta carbonara, impressing everyone, and right now the most prominent anxiety in my life is that the cream is on the verge of curdling. Our state’s reputation rests on my performance.

“Night Call” is a podcast for millennials
Ron Lisnet, the man behind the camera, has a big heart that believes in UMaine