Black Bear Baseball looks to pick up where they left off

Home /Men's Baseball, Sports, Spring/Black Bear Baseball looks to pick up where they left off 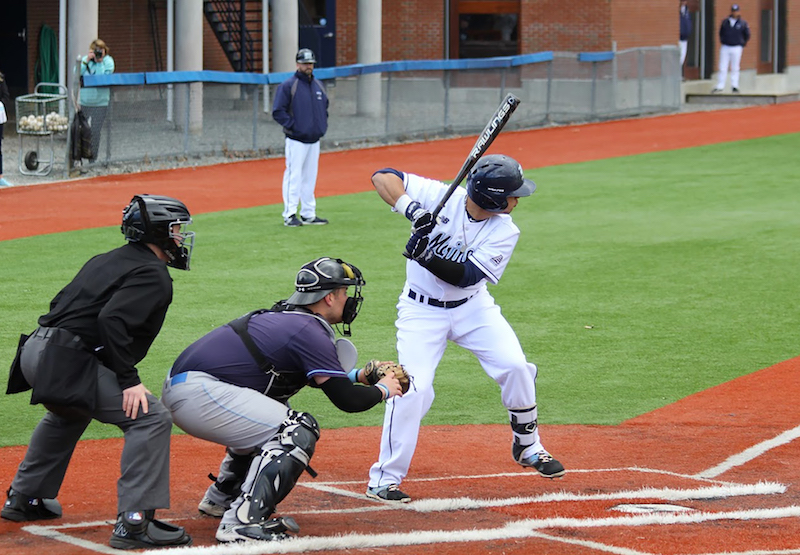 With spring looming ever closer, and the University of Maine baseball team starting its season with a weekend series against Texas Tech, the team comes in another year older, and with that, adds another year of experience.

Maine is coming off a 25-29 season that saw them lose the first three games to Winthrop University and go into a stretch between March 7 and April 1 that saw them lose 10 games out of 11 played, including a series cancellation against the University of Maryland Baltimore County. Playing away from Orono was a thorn in the Black Bears’ side, going an abysmal 1-18 on the road, compared to a more respectable 14-5 at Mahaney Diamond, and 10-6 at neutral site games.

For the Black Bears, it all comes down to having the right attitude and doing things the right way. And according to Head Coach Nick Derba, that starts at the top.

“Last season being a tale of two seasons starts with me. I didn’t have an identity as far as being a head coach goes, and there were things that I did that I didn’t believe in. The team followed suit. When you look out on the field and see something that you don’t like, the leadership is usually the problem. As the season moved on, I found my groove, and it trickled down once the guys saw what was expected,” Derba said.

There was speculation as to whether or not Maine would search further for a new head coach after Steve Trimper left to take the Stetson University job. But after Derba willed his team to their highest win total in four years, the interim tag was removed.

The Maine bats should be alive and roaring this spring, as the team’s batting leaders, fourth-year catcher Christopher Bec and third-year shortstop Jeremy Pena return. A healthy third-year third baseman Danny Casals and second-year first baseman Hernen Sardinas gaining more experience should help a deep lineup, one that finished with a team batting average of .285. The question now is who will be the run producer in the middle of the lineup, having lost right fielder and RBI leader Tyler Schwanz to graduation. Will any of the underclassmen step up and fill a big hole in the lineup? Is a rebound from third-year outfielder Colin Ridley, who hit .299 with six home runs and 42 RBI’s in his first season before slumping to a .215 in 21 games last year, in the making?

Pitching is another question mark for this team coming into the season. Black Bear pitching finished the season with a 4.73 ERA, which, while still better than six professional teams, is not quite going to get the job done. Fourth-year Justin Courtney paced the starting rotation with a 3.92. Third-year Nick Silva, while looking brilliant in four relief appearances, still finished with a 4.64. Third-year John Arel was hampered by injuries and will look to bounce back.The bullpen also had its fair share of issues, with fourth-year left-hander Connor Johnson sporting a 5.31. However, the wild card this season will be redshirt third-year right hander Chris Murphy.

Murphy struggled in 2017, pitching to an 8.04 ERA over seven appearances covering just 15.2 innings, while walking 20 and striking out 11. For a team that struggled with collecting big strikeouts when they needed it, Murphy will have to build on a 2016 that saw him punch out 54 hitters in 41 innings. Derba believes that Murphy is starting to figure out the learning curve.

“Murph has a plethora of talent, and he has the mental capacity to be successful. We just have to stay patient with him, because some players bloom a little later,” Derba said.

Murphy won’t be the only one one looking to turn the corner for the Black Bears this season. All of the returning players look to build on what they did last season. Silva believes that this year’s upperclassmen are hungry, knowing that the younger guys are waiting in the wings.

“The underclassmen bring a great attitude to the team, and really challenge us older guys. They want to to take our spots, so it’s great to have that competition,” Silva said.

There is not much that can be done on an individual level to help the team win, except of course, making the adjustments and bringing the competitive fire every single day.

“I just need to get ahead in counts, throw the pitches I want to be able to instead of getting into fastball counts. Everybody knows the fastball is coming in that spot, and it makes it easier to hit,” Johnson said.

The ceiling has been set high for the Black Bears in 2018. But projections really do not mean anything if they can’t execute the plays and play a clean game. And they have a daunting task at hand with a nationally ranked team as the first test. If they can stay competitive, maybe steal a game or two over the Red Raiders, there has to be reason to be optimistic.