Black Bears finish weekend with a tie and a win 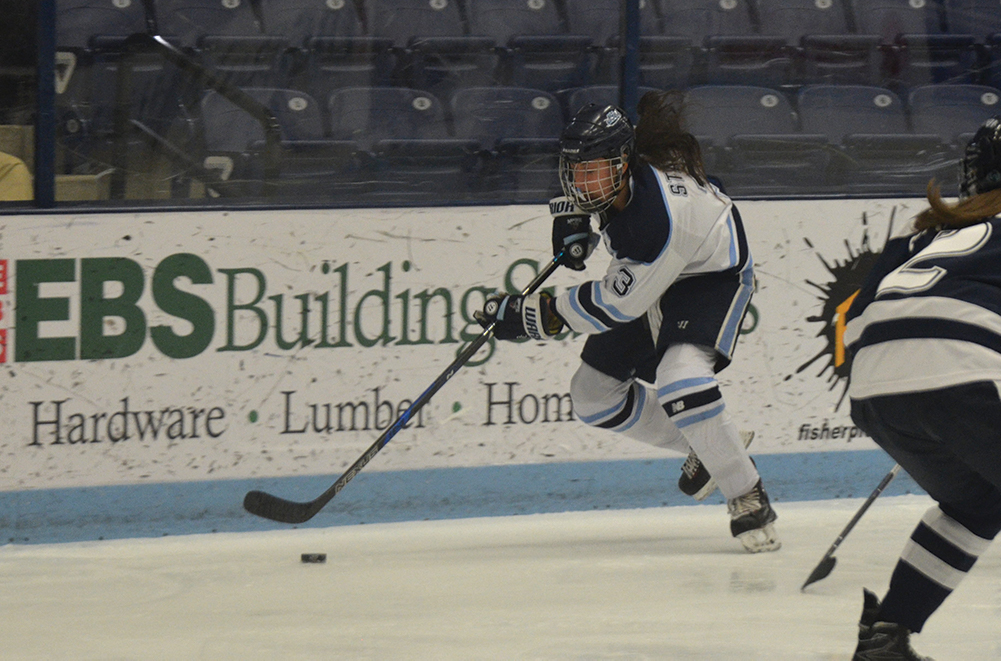 On Friday afternoon, the University of New Hampshire (UNH) Wildcats (13-11-7) visited the Alfond, ending the night in a 2-2 tie with the University of Maine Black Bears (16-9-4). This was the second time the two teams have faced each other this season, with the previous game resulting in a win for UNH. Despite this tied outcome, both teams spent significant time in the penalty box, resulting in three power-play goals.

UNH was the first to find the back of the net just 2:26 into the game after Maine’s third-year winger Cailey Hutchison was sent to the penalty box for hooking. With the man-advantage, fourth-year defender Julia Fedeski took the shot from the blue line and got it in, giving UNH the lead. Third-year defender Marie-Jo Pelletier and fourth-year winger Amy Schlagel were credited with assists.

Maine would knot the score at one with three minutes to go in the period. Fourth-year winger Carlee Toews was sent to the penalty box for checking, giving Maine the power play opportunity. First-year defender Josefine Engmann tried to get the puck in, but was blocked by a defender. Fourth-year forward Brooke Stacey was able to get the puck to second-year defender Ebba Strandberg, who got to net the puck for Maine. Engmann and Stacey got the assist. This was Strandberg’s second goal of the season, with her first being against Rensselaer in October.

Seconds later, third-year defender Alyson Matteau netted an unassisted goal for the Black Bears, bringing it all the way down the ice solo. This was Matteau’s fourth goal of the season.

UNH was finally able to tie the game in the third period when UNH had the 5-on-3 advantage after second-year winger Vendula Pribylova and second-year center Lydia Murray were sent to the penalty box for interference and boarding, respectively. Schlagel scored for the Wildcats, with an assist from Fedeski. This was Schlagel’s 11th goal of the season.

Although neither team was able to find the back of the net for the rest of the game, it wasn’t for lack of effort. The Black Bears ended the game with 25 shots on net, while UNH had 17. Fourth-year winger Catherine Tufts led the Black Bears in shots with five on the afternoon, followed by four from Standberg. Schlagel led for UNH with six on the night with Fedeski being the second highest with 3.

Second-year Carly Jackson was in the net for the Black Bears, while first-year Ava Boutilier netminded for the Wildcats. Neither goaltender got the win on the night.

The Black bears shut out the Wildcats in their second game of the series Saturday afternoon. Murray had one goal and two assists, helping the Black Bears in their 3-0 win.

The Black Bears started out strong with a goal less than two minutes into the game. Fourth-year defender Mikayla Rogers and Engmann were passing the puck back-and-forth between them, when they passed it to Murray, who was able to nudge it in past Boutilier and net the first goal of the game. This was Murray’s eighth goal of the season.

“It was the first shift and we just kept control in the zone, which we always work on, passed it out to the D, D-to-D and it was a nice shot and it just happened to hit my stick and went in. I give that to the defense and their shot,” Murray said of her goal.

Seven minutes into the second period, the Black Bears were able to score again when Pribylova netted a goal, sliding the puck in behind the goaltender. Tufts and Murray got the assist on the goal. This was Pribylova’s sixth goal of the season.

In the last period, UNH pulled their goaltender with just two minutes remaining. The Black Bears were able to break the puck away from their zone and Murray and Tufts brought the puck down the ice to Matteau, who was able to score an empty net goal.

“I think we played much better than yesterday. We worked for the entire 60 minutes, we moved the puck much better. I’m pretty happy,” UMaine Head Coach Richard Reichenbach said.

Similar to the night before, both teams spent some time in the penalty box, but this time there were no power play goals, as both teams were able to kill all their penalties. The Black Bears saw five penalties, while UNH tallied up seven. Second-year center Tereza Vanisova got two for roughing in the third period when her and UNH first-year center Ellie Sasaki got a little too physical.

“I think the biggest thing was we took less penalties. Outside of that I think yesterday when we gave up the power play goals, we were in the right position, we just weren’t doing a good job checking them,” Reichenbach said.

Second-year wing Meghara McManus led the Wildcats in shots on net with five, closely followed by Fedeski with four. For the Black Bears, Pribylova led with four, while Tufts logged three.

“We’ve kinda been in a slump the last couple weeks, so it was good to get on the top on the last game this weekend, but we had a good week of practice and I’m really happy with the team,” Murray said following the game.

UNH coaches were not available for comment following the game.