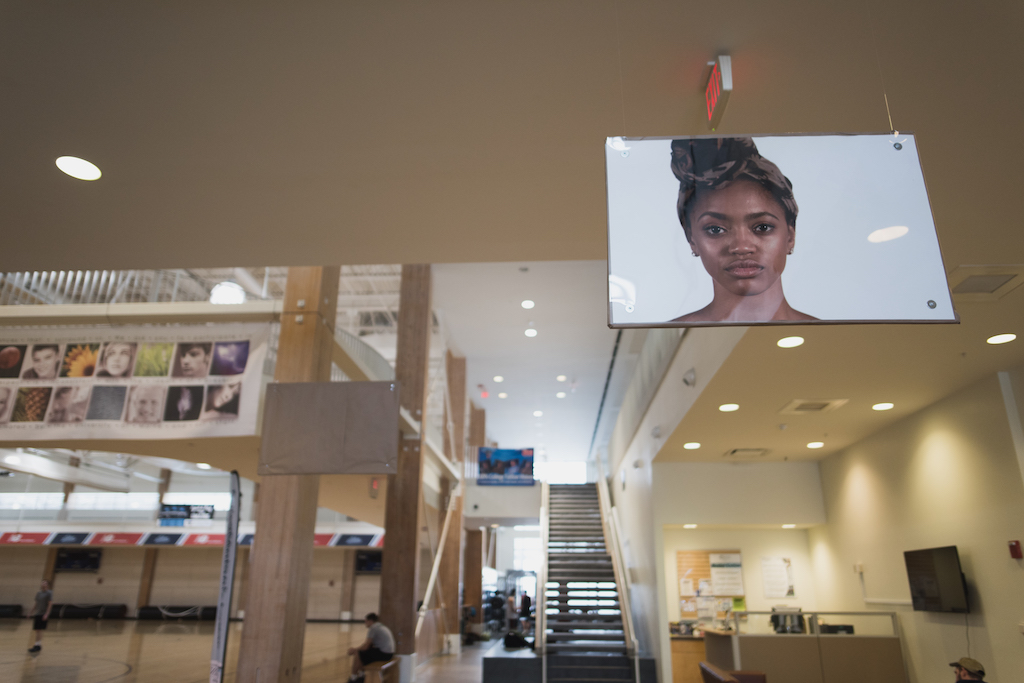 Installments of the "Brown Paper Bag Test" exhibition by Eleanor Kipping are on display all over campus. You can learn more at eleanorkipping.com. Photo by Maggie Gautreau, Photo Editor.

We are two weeks into the month of February, and Black History Month is continuing on at the University of Maine, with more events planned by the Black Student Union (BSU) and the Office of Multicultural Student Life (OMSL). A total of five events took place last week, beginning with Black History Month Mondays starting on Monday, Feb. 5. Students, faculty and community members congregated in the OMSL office on the third floor of the Memorial Union from noon to 1 p.m. for a screening of the 2011 documentary “Dark Girls.”

The film takes a look at the complex issue of colorism in our society and in African-American communities, and the relationship between beauty and blackness. Many African-American women were featured to give their perspective on growing up in a society that predominantly favors fair skin. This can be seen in mainstream movies, television and advertisements and deeply affects young black women’s perception of their own self-worth. The film was followed up with a discussion spearheaded by BSU president Kirsten Daley. Black History Month Mondays will be continuing throughout the month, with three more scheduled on Feb. 12, Feb. 19 and Feb. 26.

BSU also hosted its first Lunch and Learn series on Wednesday, Feb. 7 from 1 p.m. to 2 p.m. in the OMSL office, but ended early due to the winter weather. The OMSL website explains its purpose as, “All too often student’s historical perspective of Black History Month focuses on the obstacles and struggles of people of color. Throughout these discussions, our Black History Month Committee has created a forum that highlights the positives, strengths, and talents of entrepreneurs, physicians, and educators of color. These discussions will give students the opportunity to engage with successful individuals of color from the state of Maine and surrounding region. Our goal is for our students to receive advice and build real-world application skills that can help them succeed in areas with diversity demographics resembling Orono and similar communities in Maine. Discussions such as these will offer an opportunity for our student community to build a network for economic opportunities, and career development after graduation.” The next Lunch and Learn series will be on Feb. 21.

On Feb. 7, BSU partnered with Campus Activities and Student Engagement (CASE) for the weekly Kickin’ Flicks special “to show culturally relevant and culturally significant films for Black History Month.” They screened “Marshall,” a 2017 biographical legal drama film about Thurgood Marshall, the first African-American Supreme Court Justice. The film was directed by Reginald Hudlin and showcases the perseverance Marshall displayed in the face of racism during his first few cases. The next Kickin’ Flicks special will show “Love Beats Rhymes” on Feb. 21 and Feb. 24.

The following day, yet another event commemorated the month as UMaine’s own Dr. Liam Riordan hosted a talk at noon in the Bangor Room of the Memorial Union. The talk, titled “The Problem of Blackness in the Revolutionary United States: Contested Images of People of African Descent,” discussed the problems African-Americans faced after being freed from slavery.

Succeeding the talk was the first of two WOKEshops planned for Black History Month. Hosted by Eleanor Kipping, a graduate student in the Intermedia MFA program at UMaine, the event was designed to “explore the Black experience in the United States in consideration of hair politics, colorism, gender, and sexuality.” Kipping is also the creator of “The Brown Paper Bag Test” art installation for Black History Month, which can be seen on display around campus, including the Fogler Library and the Memorial Union. The second WOKEshop will be held on Feb. 22.

The week was packed with events to celebrate and educate and proved successful and invigorating. There is still much more to look forward to, so if you missed out on last week’s events, here is a recap for the rest of the month. On Feb. 13 and Feb. 27 at 2 p.m., there will be a special Black History Month LGBTea Party in the Rainbow Resource Center of the Memorial Union. The events are discussion based and plan to cover topics like violence against trans women of color and race in the LGBTQ community. On Feb. 15 at 8 p.m. there will be a trivia night in the Bear’s Den of the Memorial Union with questions about Black History Month in an effort to educate participants on issues that are under-reported. On Feb. 24 from 11 a.m. to 4 p.m. the New Balance Fitness Center will play host to a Black Student Union Scholarship Dodgeball Fundraiser. And finally, on Feb. 28 in the Memorial Union at noon there will be a Black History Month Finale Student Sit-In and Reading. As explained on the website, “To conclude the month we will be holding a sit-in with a reading from the black feminist collective; Combahee River Collective Statement. This reading will highlight the agenda and goals for people of color. The reading will be followed by a discussion focused on continuing the progress of the month’s events and how this discussion transitions into Women’s History Month in March.” The Black Student Union meets Fridays at 3 p.m. in the OMSL.

Sometimes you just feel “Terrible, Thanks for Asking”
UMaine Dungeons and Dragons Extends Beyond Daggerford