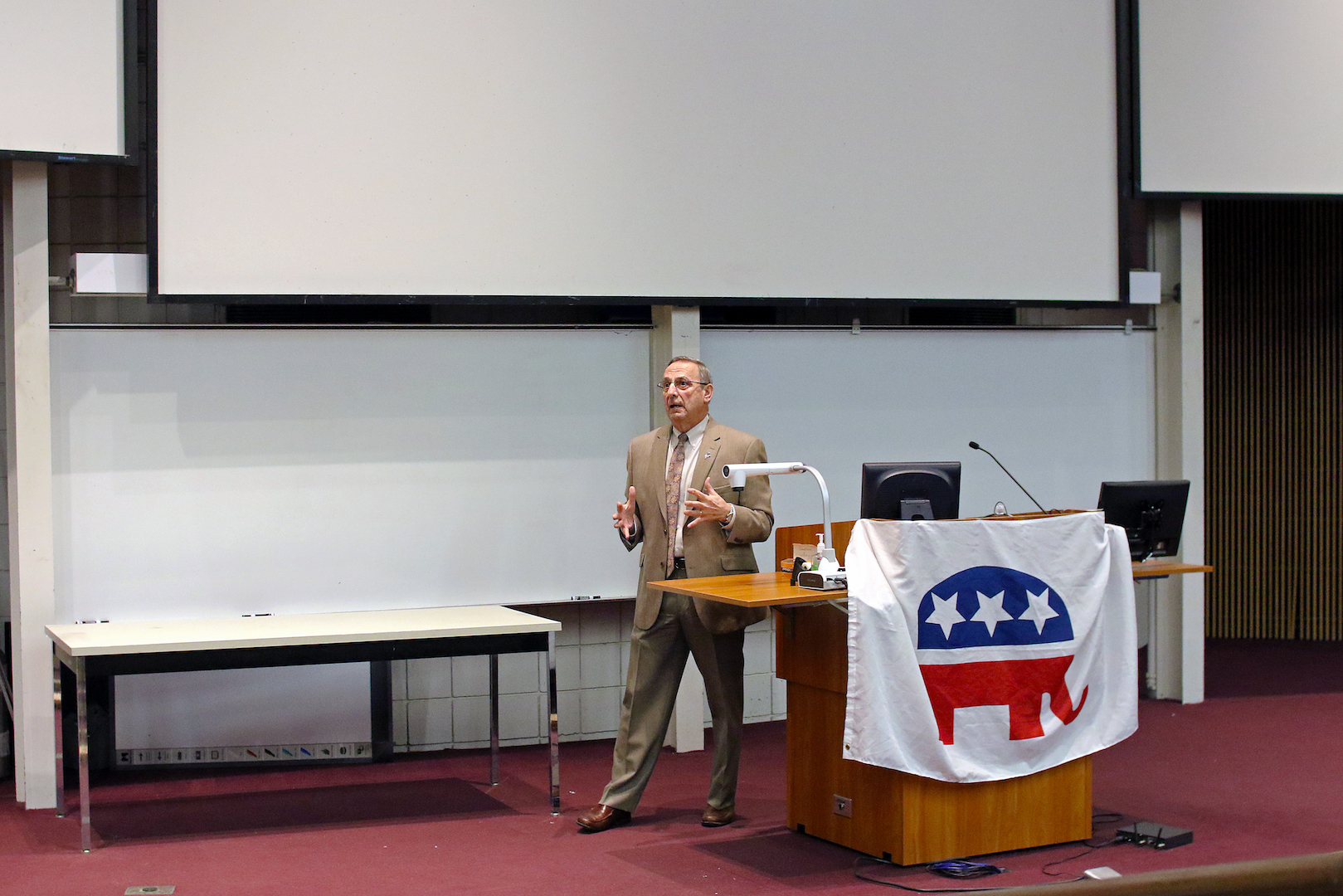 Maine governor Paul LePage speaks about how an 18-year-old should be allowed to make his or her own decisions as an adult during a talk that was being hosted by the UMaine College Republicans on February 21. Photo by Matthew Lavoie, Staff

“You have the responsibility to shape the future of the state of Maine,” was the mantra of Gov. Paul LePage during the speech he gave on Wednesday, Feb. 21 in the Donald P. Corbett Business Building at the University of Maine. Concerned with Maine’s aging demographic, the governor discussed everything from forgiving student loan debt and the national drinking age to the ways in which he intends to make Maine a business-friendly state before his term expires in January 2019.

Gov. LePage never spoke of his opinions on age restrictions in terms of buying firearms, but instead spoke of the inconsistencies in legislation as they apply to 18 and 21-year olds buying tobacco products. In his words, “This law denies you the ability to purchase a legal product.”

He discussed the $50 million bond he proposed, which would provide young people incentive to stay in the state upon graduating from an institution of higher education and joining the workforce.

“We should be doing everything we can to attract young people to this state … Young people have to have the ability to invest in their own net worth,” LePage said.

The governor cited his purpose for this bond as “keep Maine people in Maine,” while attracting young people and investors from all over the United States.

In order to address the economic infeasibility of an aging and shrinking workforce, LePage has proposed a tax credit for businesses willing to help new employees pay off their student loans.

In his final State of the State address, the governor said, “We can invest in our young people by relieving the burden of student debt for those who want to stay in Maine or choose to relocate here and start their professional careers.”

The governor visited the University of Maine amid the controversy surrounding his accusation that Associate Justice Joseph M. Jabar failed to honor an agreement between himself and the governor. This statement said that the high court justice would resign before his 20th year of service on the Maine Supreme Judicial Court.

During his speech at UMaine, the governor said, “I want the Supreme Court to be more moderate… Only one part of the state is being represented.” He offered an apology to Mainers for reappointing the justice and asserts that he “trusted someone who was untrustworthy.”

As the Portland Press Herald reported earlier this week, Gov. LePage is also facing a lawsuit with the Maine Renewable Energy Association under the cause of action that the governor violated the Maine constitution’s separation of powers when he issued a moratorium on new wind turbine permits.

Gov. LePage received a Bachelor of Science in business administration, finance and accounting from Husson University before earning a Master of Business Administration from the University of Maine. His political career began in Waterville, Maine, where he served two terms as city councilor. He was then elected mayor in 2003 before running in the gubernatorial election in 2010. He remarked during his speech that he greatly looks up to political leaders like Abraham Lincoln and former Associate Justice of the Supreme Court Antonin Scalia.

“I am what you call a reformer. I’m not a politician, I’m a businessman,” the governor said at the end of the brief question-and-answer portion of his visit.

Editors Note: This article has been edited from it’s originally published version to better clarify details.