Hockey’s Fossier skating, singing his way to the top 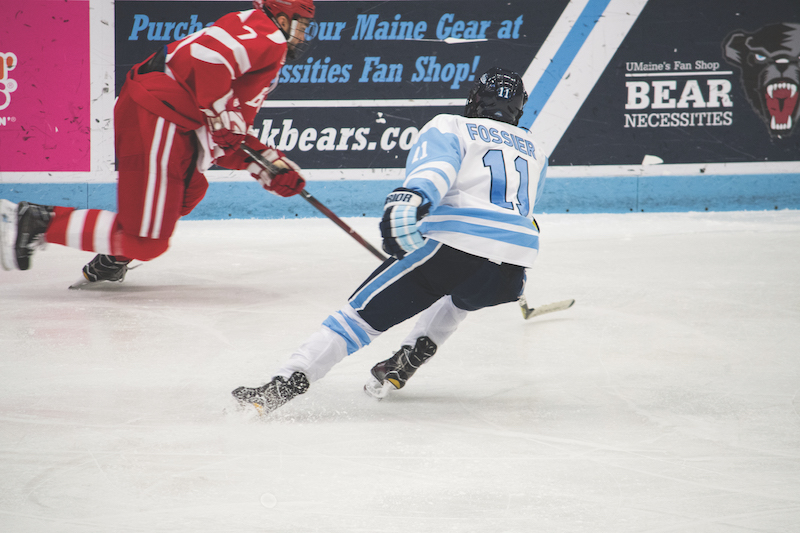 The University of Maine men’s hockey team is exceeding the expectations the pundits (myself included to a certain extent) gave them. Expected to finish at or near the bottom of Hockey East play this season, the Black Bears are sitting in fifth place at 9-7-3 within the conference, and 15-10-4 overall. This record puts them just outside of the top four with 21 points, sandwiched in between Boston University and The University of Massachusetts Lowell, and just five points behind conference leader Boston College. Barring any sort of stumble, Maine could host a quarterfinal matchup in the Hockey East tournament.

The key to the success of the team this season has been its young core, and one of the contributors to this core is second-year forward Mitch Fossier.

Fossier, who committed to the University of Maine as a 16-year-old, has 24 points on the season so far, having scored eight goals and dished out 16 assists. He has notched multiple points in a game on 10 separate occasions, including three against the University of Vermont on Dec. 2 by tallying three assists in the Black Bears’ 6-2 victory over the Catamounts.

With the amount of talent he displays on the ice, one would expect that he would have started to skate at an early age and would have lived somewhere that would afford him the ample opportunity to do so, whether for drills or just to have fun. Well, there is truth to this.

“My dad played at the college level, so he he had me on skates when I was little. I also played lacrosse and tennis, a year of football, but hockey was always my favorite,” Fossier said.

The difference is the hometown. Fossier hails from Alpharetta, Georgia, a half hour outside of Atlanta, where hockey has struggled to find a footing at the professional level. The Flames started there in 1972 before moving to Calgary after nine seasons, and the Thrashers, having made one playoff appearance in 15 seasons, moved after the 2010-2011 season to become the Winnipeg Jets. He does not find this to be a problem, and has gone to the necessary lengths to excel at the sport.

“When you play hockey in Georgia, you head north to play against different teams. Then there is juniors, so I spent a year in Wisconsin, a year in South Dakota for the Sioux City Musketeers, and a year in Michigan. I was pretty well adjusted by the time I got here to Maine,” Fossier said.

Despite there not being a professional team in the area, he is encouraged by the interest in the sport at the youth level.

“You wouldn’t think it, but the Atlanta area does have that pocket where hockey is gaining popularity. It’s great to go back to the Cooler (one of the local ice rinks) and get the kids excited to play,” Fossier said.

There is a similar sense of optimism within the Black Bear locker room.

“Hockey’s popularity is growing, especially at the youth level. There is that pocket there, and it is always great to see kids on the ice when we head back for offseason training,” Chase Pearson, second-year center and linemate to Fossier, said.

Coming from a town where hockey is not expected to be popular, one would think that two top-rate players would have been playing together for a long time. Sometimes, your first experience with someone from your hometown comes by going against them.

“You would think that coming from the same town, living 10 minutes up the road from somebody, that you would be playing with them your whole life. I knew of Mitch [Fossier], but that was mostly through playing against him in youth league. The first time we played on the same team was when we came here,” Pearson said.

Sport, art and balancing the workload

Black Bear fans know Fossier for what he does on the ice. What may come as a bit of a surprise is that he also expresses his artistic side through music.

“I started playing music when I was 10, and really got into it when I was 12 or 13. It’s another thing I am really passionate about, and it’s something I have worked a lot with at school. I’m sure I will be doing something within music to a good extent, depending on what else I am doing and how much time I will have,” he said.

While a gig schedule in the area is sure to be released, Fossier can’t really guarantee an appearance on any sort of singing competition.

Being a student athlete is already a juggling act, almost as if it were two full-time jobs in and of themselves. Adding performances could certainly strain the level of attention further. For Fossier, it all comes down to focusing on one thing at a time.

“It’s certainly a lot and makes for very busy days. The time to get done what needs to be done is there, I just have to be careful with managing my time. I like to think I am good at staying in the moment, so I am typically focused on what I am doing, whether that is my class work, hockey, or music,” Fossier said.

A new media student, who is not sure exactly what to do with the degree, Fossier is keeping his eye on his passions. And with two seasons left, he looks to hone his skills and make whatever it takes to get to the biggest stage happen.