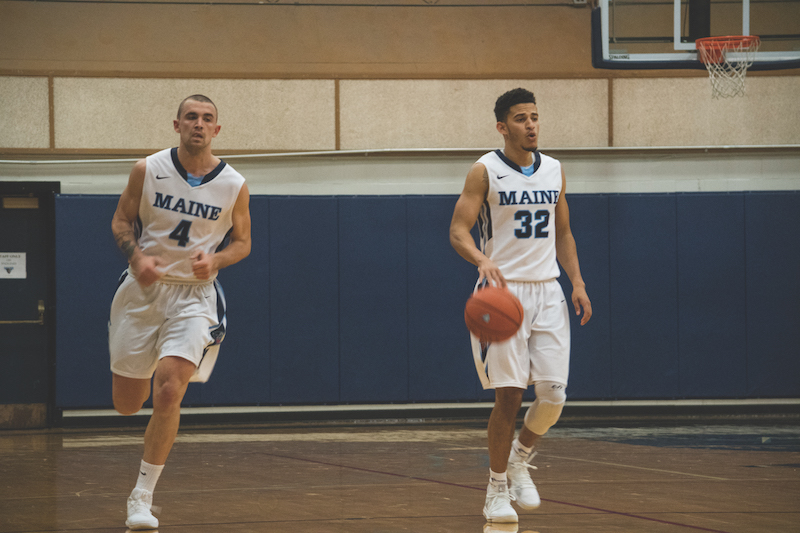 Maine came up short in their matchup with Hartford. File photo

Fourth-year guard Aaron Calixte set the tone early for Maine, reaching double figures in the first seven minutes of the contest. His two three-pointers in the early-going gave Maine an 11-7 lead. For the game, Calixte finished with a team high 24 points on the night. The Massachusetts native chipped in five assists, four rebounds, a block and a steal on top of his eighth 20-plus point game of the season.

The Hawks snagged their first lead of the game, 16-15, following a 9-4 run. The team was lead by third-year Jason Dunne, who had a team-high 19 points for the Hawks. Overall Hartford had four players hit double figures. The team would add to their 9-4 run and extend their lead to 28-21 at the midpoint of the first half.

Trailing 36-33 in the final minute of the first half, first-year guard Dennis Ashley knocked down a 3-point field goal to notch the game at 36-36 heading into the break.

In the second half, it was second-year forward Andrew Fleming taking over for the Black Bears. He scored the first points of the half for the team, giving them a 38-36 lead, their first since the 15:10 mark of the first. Fleming finished the game with 16 points total, including 12 in the second half. His 12 points in the second frame lead all Maine scorers.

Much of the final frame proved to be a back and forth battle. Neither team lead by more than  four points. Leading 59-58 with under three to play, third-year Ilija Stojiljkovic got to the charity stripe and sank both free throws to extend the Black Bears lead to three. The Serbia native finished with six points and a team high 11 rebounds.

The Hawks would once again go on a run that would prove to be the difference maker in the game. Hartford drained a 3 on their next possession tying the game for the ninth time on the night. They would take the lead on their following possession after they made two free throws. Maine had chances to take the lead on their next two possessions, but failed to do so and was forced to foul with only 16 seconds left. The Hawks once again made both of their free throws and took a 4–point lead. Maine turned to Calixte for answers and he delivered a quick field goal to make it 65-63. Maine fouled Hartford with six seconds left hoping for a Hawks miss to keep their chances alive. However, the Hawks once again made both foul shots, and took home the win 67-63. The Hawks shot 90 percent from the line in the second half, compared to Maine’s 50 percent.

The win gave Hartford their eighth in America East play.

The Hawks return to the hardwood on Sunday, Feb. 18, to play the America East leading Vermont Catamounts. Tipoff is slated for 2 p.m. The Black Bears won’t return to action until Feb. 21, when they travel south to take on the University of Massachusetts-Lowell, with tip-off set for 7 p.m.