Maine Gets Back on Track with Win Over UMass-Lowell 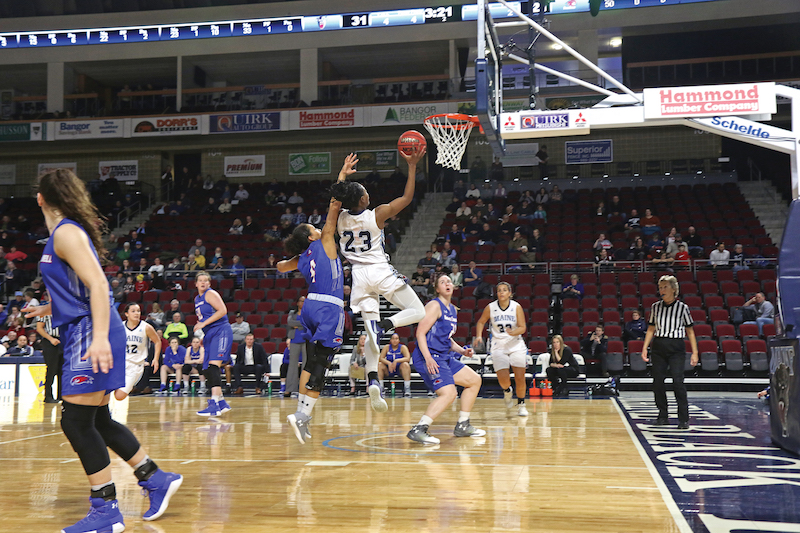 Tanesha Sutton flies over the competing River hawks in the first half on Wednesday, February 14. Matthew Lavoie, Maine Campus

After having their eight-game winning streak snapped last Sunday at the hands of Stony Brook, the University of Maine Black Bears (18-9) got back to their winning ways on Wednesday, Feb. 14 against the University of Massachusetts-Lowell River Hawks (4-22) at the Cross Insurance Arena in Bangor.

Maine came out of the gates scorching hot with some smooth ball movement that led to wide open jumpers, and they got out to a quick 14-4 lead in the first six and a half minutes. This was partly thanks to a couple of three-pointers from first-year guard Dor Saar, who would end the game with seven points and six assists, along with some suffocating defense from redshirt third-year guard Tanesha Sutton, who tallied two steals in the opening minutes. After Maine’s hot shooting cooled off a bit, UMass-Lowell got a rhythm going towards the end of the quarter. With the help of third-year guard Brianna Rudolph, who put up eight points in the opening quarter, the game was a bit closer headed into the second, with Maine up 21-14.

The second quarter began the opposite of the first; both teams played good defense and were forced to take some tough shots. Maine continued to lock down the River Hawks as the quarter went on, holding them scoreless over the course of three minutes during the middle of the quarter. They built up a 14-point lead with 2:40 left to play after two free throws from third-year guard Parise Rossignol. The momentum would not last long, and  five quick points from first-year guard Paula Lopez helped cut the lead from 14 to 4 in the final minutes. A somewhat deflated Black Bears squad went into the half with a 35-31 lead.

After the break, UMass-Lowell continued to trim down the lead. Rudolph filled it up to open the second half, and the score was tied for the first time since tip-off. Maine scored 13 points over the next four minutes to open up a 50-39 lead after Rudolph tied it at 37. Getting inside seemed to be the key for the Black Bears; they shot only 20 percent from long-range the entire game, so getting inside and getting easy layups was a must. Maine was able to hold their sizeable lead and looked like they were in a prime seat to coast to a victory, up 54-45 at the end of the third.

Things got interesting during the final quarter. There were a lot of good defensive plays and missed shots, as both teams went a whole two minutes and 45 seconds without a bucket midway through the quarter. The River Hawks turned it on in the fourth; the Black Bears didn’t score from the 7:07 mark until there were three minutes and 20 seconds left in the period. Then the River Hawks mounted a quick comeback, cutting it to a 3-point deficit with a minute and 15 seconds remaining.

“We just have to take care of the ball, get some stops defensively, make sure we get our rebounds and make our free throws,” Maine Head Coach Amy Vachon said.

Well, the Black Bears did just that, as Sutton and Millan hit five shots to put the game out of reach for the River Hawks. The final score was 70-65 in favor of Maine. The high scorers were Sutton, who had a career-high 19 points to go with nine boards, Millan, who had 14 points and five boards, along with bench scorer Rossignol, who had 13 points and shot 5-10 on the night. Rudolph lead the way for UMass-Lowell with 21 points, and Lopez finished the game with 15 points and five assists. Fourth-year forward Kayla Gibbs also tallied 13 points and seven rebounds on the night.

Maine has only two more games left in the season before America East playoffs begin. Vachon acknowledged the rest the team is expected to get is going to help for the final push.

“I think it’s a good time for a break y’know, we’ve been going hard for the last three weeks and we need to rejuvenate and relax a little bit and then be ready to come out and play hard the last two or so weeks,” Vachon said.

Maine’s next game is at the University of Vermont, which will tip off next Thursday at 7 p.m., and they will look to make sure they end the season on a high note.

Review of ‘Find Me’ by J.S. Monroe a hopeful beginning and a disappointing ending
Baseball drops opener to Texas Tech