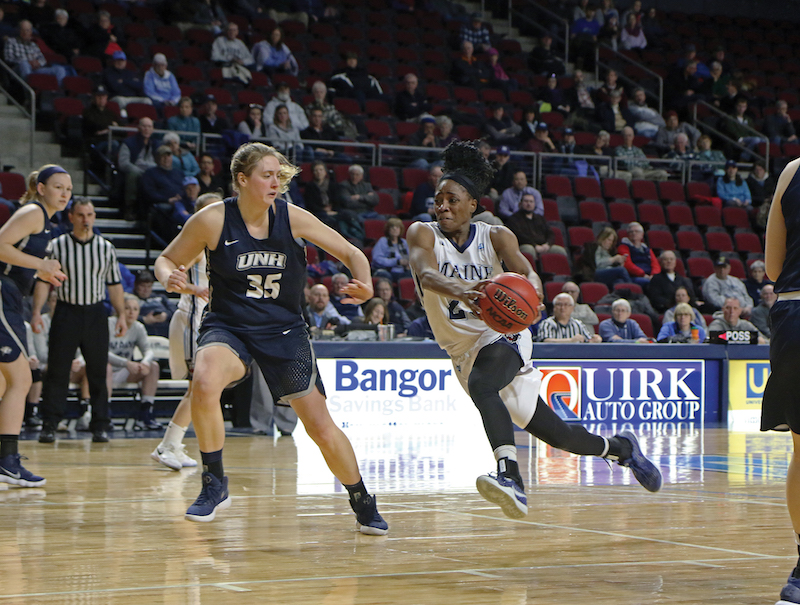 On the frigid night of Monday, Feb. 5, the University of Maine women’s basketball team extended their win streak to seven in a gritty battle with the University of Hartford Hawks, tallying the victory 59-56. Redshirt third-year guard Tanesha Sutton would score the go-ahead bucket with 22 seconds left. After crossing over her defender, Sutton slashed to the rim and finished strong to put Maine up by three. On the defensive end it was second-year guard and potential America East Player of The Year Blanca Millan who had a clutch block that fell into the hands of Sutton to seal the victory.

“We have been playing pretty good basketball the last month. We were fortunate to get the win against Hartford, but we had players step up and make big plays — specifically Blanca, Dor [Saar], and Tanesha,” Maine Head Coach Amy Vachon said.

Maine would come out of the gates with 8 unanswered points against the Hawks as they found their mojo early and often, going up by 12 just five minutes into the game. The 16-4 run was led by Millan,  second-year guard Julie Brosseau and Saar. It started when Brosseau and Saar drained back-to-back threes, following it up with a good layup from Brosseau to give Maine an 8-point advantage before Hartford would respond with a two of their own. Maine’s mojo would run out after the 16-4 start and the Hawks finished the quarter on a 6-0 run that would overlap into the second quarter.

Led by fourth-year forward Darby Lee, who finished with a game high 24 points, Hartford rattled off a 19-0 run to take the lead. Millan would stop the run and score the last 7 points after banging a 3-pointer and swishing a mid-range jumper to keep the Black Bears in striking distance. Maine committed 15 of a season high 28 turnovers in the game in the first half and shot an uncharacteristic 39 percent from the field, but only trailed 28-25.

“We needed to take better care of the ball. Unfortunately, we didn’t do that over the course of the game but made the plays we needed to to come out with the win,” Vachon said.

Maine may have been cold in the second quarter, but they came out of halftime just as hot. Brosseau was up to the task of leading the Black Bears after they were outscored 18-9 in the second quarter, hitting back-to-back 3-point buckets that put into motion a 14-0 run as the team would outscore the Hawks 20-6 in the third quarter.

“Blanca [Millan] and Julie [Brousseau] are playing great. They are fantastic scorers and shooters and lead us on the offensive end,” Vachon said of her two players who came up big in the second half.

Maine would continue its dominance into the fourth quarter until the rhythm went missing. Lee and third-year guard Lindsey Abed gave it a true effort as they helped orchestrate a 20-7 run that cut the Black Bears’ lead to just one with a minute and a half left in the contest. Maine would buckle down — led by Sutton’s go-ahead bucket and Milian’s clutch block, the Black Bears found a way to win a game of runs.

The Black Bears are now tied atop the America East standings with a 9-2 conference record and are 16-8 overall.

Millan and Brosseau each finished with 19 points and Saar finished with 11. Sutton and Brosseau tied with the team high three assists. Millian led the way with eight rebounds and fourth-year forward Kirsten Johnson tallied up seven, helping Maine outrebound the Hawks 34-28. Maine will stay at the friendly confines of the Cross Insurance Center in Bangor, looking to win its eighth straight Thursday over its rival, the University of New Hampshire.

Thursday night featured one of the oldest rivalries in college sports as the University of New Hampshire Wildcats traveled to the Cross Insurance Center to take on the University of Maine Black Bears. UMaine would have four different Black Bears in double figures as they won their eighth straight in impressive fashion, dismantling UNH on both ends of the floor for a 77-46 rout. Brosseau, Millan, second-year Fanny Wadling and Sutton willed Maine on the offensive end, and Saar led the team with eight assists, showing great court vision all game. On the defensive end Wadling showed she was worth more than points, having a block party against UNH with four blocks on the night.

The Black Bears, like they did against Hartford earlier this week, came out of the locker room ready to make plays. Maine started off on a 9-0 run, as Brosseau would get the first bucket for the Black Bears on a silky jumper and the Black Bears followed it up with a Sutton 3-pointer. Unlike the Hartford game, Maine had its mojo going all game and never let up the lead, finishing the quarter up 18-8.

The second half started much like the first. Johnson, Sutton and Millan would each score buckets in an early 6-0 run to extend the lead to 24-8. UNH’s fourth-year forward Kat Fogarty would collect a tough offensive rebound and earn the put back for the first bucket of the second quarter for the Wildcats. The bleeding wouldn’t stop there for the Wildcats as Maine kept its its foot on the gas, extending their lead to 19 at one point on an impressive 8-12 from the field in the second quarter. Maine would hold UNH to 27 percent shooting from the field and behind the arc while Maine shot 55 percent from the field and 33 percent from three.

Halftime helped the Wildcats regroup as they came out in a rhythm on the offensive end in the third quarter. UNH chipped away at the deficit with a 7-4 run to cut the lead to 13, led by fourth-year center Carlie Pogue’s two buckets in the paint and a three from first-year guard Amanda Torres. Before the momentum could totally shift, Brosseau would hit a pair of threes during a Maine 8-2 run that would bring the lead back to 19 and Maine would be in control the rest of the way.

“Tonight’s game against UNH was a great overall team performance. Defensively we wanted to make them beat us from the outside and limit their paint touches, which we did. Offensively we moved the ball and had 25 assists,” Coach Vachon said. Maine outscored UNH in the paint 28-22 Thursday night.

Sutton earned her fourth double-double of the season in a dominant performance for the redshirt third-year. Sutton finished with 12 points, 11 boards and four assists. Brosseau led the way with a game-high 19 points, hitting 5-of-9 from behind the arc. Millan, who has been the go-to for the Black Bears this season, finished with her 24th consecutive double-figure performance with 16 points. Wadling went 7-for-9 from the field for 15 points to go along with six rebounds and a career-high four blocks.

Maine will be hitting the road this weekend after back-to-back home victories to extend the win streak. The Black Bears will try to collect their ninth consecutive victory Sunday, Feb. 11 when they travel to take on Stony Brook for a 2 p.m. tip-off.