A small portrait of Martin Luther King Jr. looks over the paint-splattered desk. There is barely a blank surface in the entire space. Walls that don’t stretch all the way to the ceiling are covered in works from projects past and personal inspirations.

Perhaps the largest is a brown paper sheet, hanging highest. It’s from a performative piece from April 28, 2017, wherein Eleanor Kipping explored the experience of being a mixed-race woman. On it are written in chalk, over and over like a student memorizing lines, “I will not say n—–”

Kipping is in her third year of completing a Master of Fine Arts degree in the University of Maine’s Intermedia program. Currently her art is being featured as part of Black History Month in seven buildings on the UMaine campus.

To Kipping, Black History Month is crucial because it acknowledges the history, struggle and contribution of black people, and provides a space for healing. “It’s unfortunate that it’s just a month.”

Feb. 1 marked the first day of Black History Month at UMaine, and the “Black Lives Matter” flag raising was followed by a gathering in the North Pod of the Memorial Union.

“While I was working on my undergraduate degree … I was at an institution that did not observe Black History Month, let alone celebrate it,” Kipping said as she introduced the month of reflection and recognition by explaining her art installation.

“The Brown Paper Bag Test” is a series of 15 portraits of black women from New York City paired with their personal narratives of growing up black. The name comes from the practice of using a paper bag to determine a person’s color, lighter or darker, and therefore their place in society. In the late 20th century, being lighter could gain you access to a nightclub, sorority, university or church. One hundred years earlier, being darker meant you’d be working in the fields, rather than in a rich man’s house.

According to her website (eleanorkipping.com) it focuses on the issue of “colorism,” the discrimination a person experiences because of the shade of their skin. As an audio and video production specialist, Kipping has overcome challenges presented by her race and gender.

“My mentors, the ones who were supposed to be helping me break into a white male-dominated field, used to think it was cute and funny to call me Aunt Jemima.”

Being one of few black people in Bangor, Maine has been one of the largest influences on her work. “It’s been hard. It can be lonely, it can be frustrating … but it’s driven my desire to know black history.”

Growing up in a predominantly white community presented challenges for Kipping, whose mother is white and late father was black. Through interviews for the project, she learned that even though some women were raised in a black community and taught to celebrate their blackness, they shared similar stories of personal discovery and black experiences to her own.

Many of the anecdotes involve black women learning how to take care of their hair.

“Hair is a great entry point. Everyone knows that struggle,” Kipping said.

A photograph of Kipping sitting in a powerful stance and wearing a bra fashioned from synthetic braiding hair, her own hair tied in Bantu knots, also hangs on the wall.

Kipping’s work isn’t meant to look pretty, or to be fun; it’s an exercise in what needs to be said and she is an intermediary between the message and understanding. “That might mean it’s ugly, or made with a material I don’t necessarily want to work with.”

Kipping encourages discussion about her work. Often there is a physical or online space for viewers to share their experiences, and she’s had mixed reactions based on the time and place she performs. She says occasionally, people who witness her works end up crying.

Though her message is clear and her words are strong, Kipping is excited to talk to others about her ideals and her work. She wants viewers to understand where she’s coming from, and help them grow a little in return.

“Keep asking questions. Keep probing, regardless of what you look like or where you come from. Explore comfort and discomfort where it is found, and don’t be afraid.” 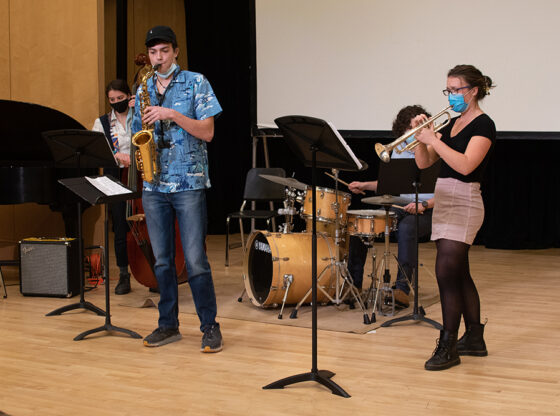