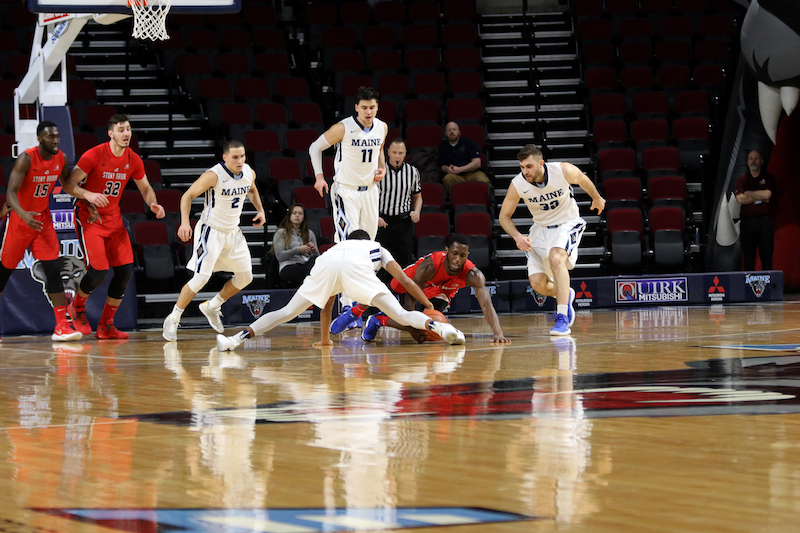 The University of Maine men’s basketball team (6-21) traveled to Durham, New Hampshire to play rival Wildcats from the University of New Hampshire (10-15) on Thursday, Feb. 8. The Black Bears fell to the Wildcats 71-56. The last time these two teams met was Jan. 24, when the Black Bears defeated the Wildcats in a final minute showdown, 69-68. UNH is currently sitting fifth in the America East Standings, while Maine is sitting in eighth.

In the first half, the Wildcats took an early 6-0 lead. The Black Bears got on the board when fourth-year Aaron Calixte made two layups and then a jump shot to cut the deficit to one. UNH increased their lead to two when fourth-year Tanner Leissner converted on a layup. Graduate student Jacoby Armstrong increased their lead when he hit a jumper, but Maine then responded with a 3-pointer from second-year Danny Evans, pulling within two, 11-9.

Third-year Dusan Majstorovic then hit a 3-pointer to give Maine a one-point lead. The game remained close when redshirt second-year Isaiah White converted on a layup to keep Maine’s lead at one. White increased Maine’s lead to two with a free throw. However, UNH first-year Josh Hopkins tied the game when he hit his first jumper of the game.

At the half, the Black Bears led the Wildcats 34-24. Calixte led in points with 12, followed by Majstorovic with 8 and second-year Andrew Fleming with 6. Maine led in field goal percentage, 41 to 23. Maine also led in steals, 3-2 and in blocks, 4-0.

In the second half, UNH decreased Maine’s lead to one with 13:05 remaining in the game. Then the Wildcats took the lead when first-year Evan Horn converted on a layup. Maine answered when Fleming hit a jumper to retake the lead. UNH retook the lead with 11:17 to go in the game.

UNH continued to increase their lead to four with 7:19 remaining. With .37 seconds left, New Hampshire scored their final buckets of the game to end the scoring. Calixte finished the game with 16 points, Fleming wrapped up the night with 12, and White and Majstorovic finished with 8 points each. Maine led in field goal percentage, 38-36 and in blocks, 6-1. UNH dominated on the boards, out-rebounding the Black Bears 47-32.

Calixte would become the 30th player in Black Bear history to score 1,000 points, and the first since Gerald McLemore reached the milestone in 2011.

Starting for the Black Bears were Calixte, Fleming, third-years Celio Araujo and Ilija Stojiljkovic and White.

In the first half, fourth-year Junior Saintel started off the scoring for the Seawolves on their first possession. Redshirt second-year Akwasi Yeboah then drained a 3-pointer to put the Seawolves up by five.

Calixte then went two-for-two at the line to put the Black Bears on the scoreboard. White scored his first basket of the game after he drained a three. However, Stony Brook responded when fourth-year Tyrell Sturdivant drained a 3-pointer of his own, making the score 10-5.

Olaniyi scored his second three of the game with 12:15 remaining in the half. Just seconds later, Olaniyi drained another 3-pointer to increase their lead to nine.

Fourth-year Bryan Sekunda made a nice pass to fourth-year Jakub Petras for his first basket of the game.

Then, fourth-year Ilker Er scored his first basket of the game after he finished a pass from White. Er then drained his first three-pointer of the game to decrease the lead to four.

Sekunda finished a three-pointer to make the score 30-21 with 4:05 remaining in the first half. Calixte then fed second-year Danny Evans for his first basket of the game.

Yeboah drained a three-pointer for his 6th point of the game, then Calixte came down the court and hit one of his own, 33-30. At the half, Calixte led the Black Bears in points with 13, followed by Er with nine and White with six.

In the second half, Calixte found White driving into the key for his eighth point of the game. Calixte then drove down for a lay-up, getting the basket and drawing a foul to put Maine in the lead for the first time in the game.

Evans then drained his first 3-pointer of the game, increasing the lead to four. Calixte then capitalized on a Stony Brook turnover, resulting in an easy layup.

Sekunda then made a sneaky bounce pass in the key to Olaniyi to tie the game up at 47 with 10:05 remaining in the game.

Fourth-year UC Iroegbu drained a three-pointer but the Black Bears quickly responded when Araujo converted on a layup.

Fleming found Er in the key to take back the lead with 5:20 remaining in the game. Calixte then found a cutting Araujo to maintain the lead. White then found Fleming for a layup to increase the lead to four.

Iroegbu then flew through the key and finished a layup to make it a one point game with 1:40 remaining. Yeboah converted on a layup shortly after to give the Seawolves a one point lead with 44 seconds remaining. Fleming then made a bucket with 0:01 remaining on the clock but it wouldn’t be enough to win the game.

Stony Brook hung onto the lead, finishing the game 64-61. Calixte finished the game with 19 points, followed by White with 14 and Er with 11.

“I think that the team played well and showed a lot of mental toughness. There were many points during the game where Stony Brook went on runs. We could have easily backed down but we really held together and executed well. We just didn’t get the shots to fall, definitely a great effort from the team,” Fleming said.

Men and women’s track down New Hampshire, Husson in only home meet
Born on Valentine’s Day