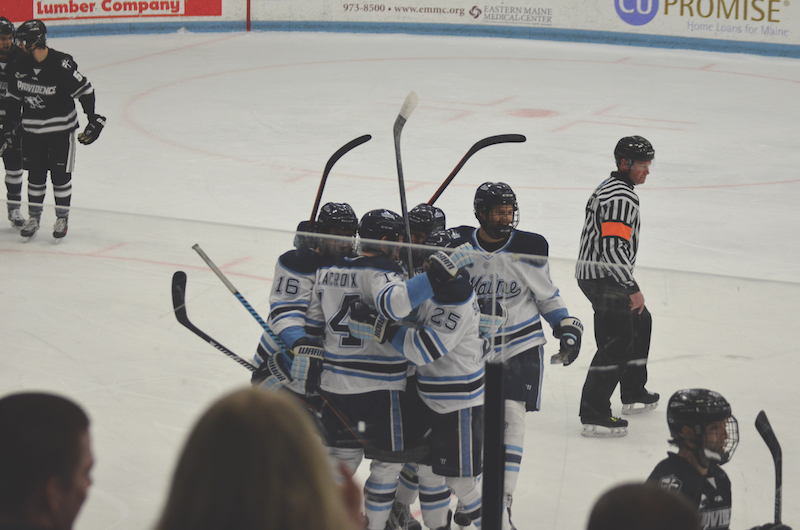 The University of Maine men’s hockey team (15-11-4) traveled to Providence, Rhode Island to take on the Friars from Providence College (18-9-4) on Friday, Feb. 9. In a tight game, the Black Bears fell to the Friars 3-2. Both teams have played against one another 122 times prior to this game, with the Black Bears holding the advantage 64-51-7. The last time these two teams faced off was at the Friendship Four in Belfast, Northern Ireland, with Providence taking the game 3-0.

Starting in net for the Black Bears was first-year Jeremy Swayman, who is tied for second in the country among rookies with 12 wins. His .926 save percentage is sixth in the nation, first in the conference and second nationally among rookie goalies.

Starting in the net for the Friars was third-year Hayden Hawkey, who has started all 30 games this season, posting a 2.24 goals-against average, a .910 save percentage and three shutouts.

In the first period, the Friars took to the scoreboard first when second-year Vimal Sukumaran scored his first goal of the season, with an assist from third-year Erik Foley and second-year Brandon Duhaime.

The Friars took the lead two minutes and 26 seconds after Pearson’s goal when second-year Jacob Bryson scored off assists from Sukumaran and second-year Josh Wilkins. After 20 minutes, Providence had a one-goal lead. The Friars also led in shots on goal, 13-9.

In the second period, the Black Bears went on the power play after a tripping call. However, it shortly became a 4-on-4 when Maine took a hooking call.

In the third period there was no scoring, so the game had to go to overtime. After 60 minutes of play, the Friars led in shots on goal, 35-32.

In overtime, the Friars took the win when third-year Scott Conway scored on the power play. Providence finished the game leading Maine in shots on goal, 42-33. Swayman finished the night with 39 saves, while Hawkey stopped 31.

The Black Bears return to the ice Wednesday, Feb. 14 when they travel to Durham, New Hampshire to take on the Wildcats from the University of New Hampshire. Puck drop is scheduled for 7 p.m. The Friars return to the ice Friday, Feb. 16 when they host the River Hawks from the University of Massachusetts-Lowell. Puck drop is scheduled for 7:15 p.m.